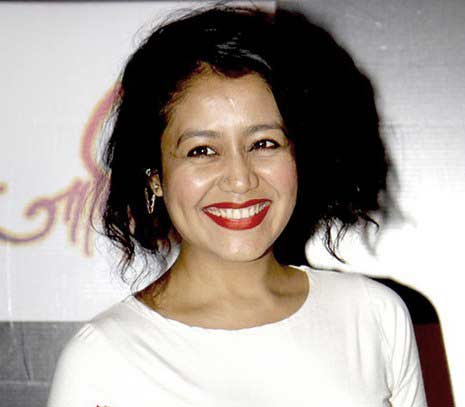 Neha Kakar (born 6 June 1988) is a playback singer. She began performing at religious events at the age of four and participated in the second season of the singing reality show, Indian Idol, in which she was eliminated early. After several struggles, she made her Bollywood debut as a chorus singer in the film Meerabai Not Out. She rose to prominence upon the release of the dance track “Second Hand Jawani” from Cocktail which was followed by several other popular party songs including “Sunny Sunny” from Yaariyan and “London Thumakda” from Queen.

Afterwards, she mostly performed party tracks like “Aao Raja” from Gabbar Is Back, “Tu Isaq Mera” from Hate Story 3, “Humne Pee Rakhi Hai” from Sanam Re and “Kar Gayi Chull” from Kapoor & Sons. She proved her versatility in musical range with the release of “Mile Ho Tum” from Fever which topped the list of most-viewed Bollywood songs on YouTube. She then released several chart-busters which made into the same list, including “Aankh Maarey” from Simmba, “Dilbar” from Satyameva Jayate , “Badri Ki Dulhania” from Badrinath Ki Dulhania, “Cheez Badi” from Machine, “Kala Chashma” for the film Baar Baar Dekho and the private single “Nikle Currant”, all of which crossed over six hundred million views. Similarly, “Dilbar” marks the first Indian song to reach number three spot on the Billboard YouTube Music Chart.

From 2017 onwards, Kakkar, primarily, in collaboration with Tanishk Bagchi, became more associated with the trend of remaking old to very recent songs, which resulted in several backlashes targeted for the singer, though she personally favoured the trend of recreations and opined that they have been well-appreciated. Apart from playback singing, Kakkar has appeared in several music videos and as a judge on several television reality shows including “Indian Idol”, the same show she participated during her early days. On these shows, she has been trolled in social media several times for crying on-screen. She openly admits that she is a “proud emotional girl.” She appeared in the India Forbes Celebrity 100 in 2017 and 2019.

Kakkar was born on 6 June 1988 in Rishikesh, Uttarakhand. She is the younger sister of playback singer Sonu Kakkar and singer-composer Tony Kakkar. During the early days, her father, Rishikesh Kakkar used to sell samosa outside a college for a living while her mother Niti Kakkar was a homemaker. In the city, Kakkar shared a rented single room house with her whole family, in which they used to sleep and simultaneously convert to a kitchen by putting a table.

In the early 90s, Kakkar along with her family moved to Delhi, in order to try her luck in singing. At that time, the family was reeling under a financial crisis. Hoping to “contribute” to the family, Kakkar, at the age of four, started performing at local gatherings and religious event with her siblings which she credited for “boosting” her self-confidence. “I only sang bhajans from four to sixteen years. I would attend four to five jagrans in a day, which became my training ground”. Having music talent at home, she never felt the need to get any formal training in singing. In 2004, she moved to Mumbai with her brother, Tony Kakkar.

In 2006, at the age of sixteen, Kakkar auditioned for the second season of Indian Idol where she got eliminated early in the show. Being the youngest participant, she was naturally “pampered” on the sets, and recalls that the show gave her “great memories and fame”. Commenting on her short-journey, she said, “I feel, whatever happens, happens for a reason. I am just glad the way my journey worked out. It has been a tremendous learning experience”. According to her, people “appreciated my voice saying that you sing well but nobody ever told me that I am a great singer”. Hence, determined to prove that she can sing well, Kakkar worked on “polishing” her voice afterwards.

Kakkar possesses a contralto vocal range and has the ability to reach E5 note. Her voice has been described several times in the media as “distinct”, “unique”, “chirpy”, “seductive” and “partially nasal”. She did not take any formal vocal training. In an interview with The Indian Express she said, “The fact that I am not formally trained never really bothered me. There were times I knew it could have been a brownie point, had I been trained but it never pulled me back”. Believing that she needs to be distinctive to be noticed from the crowd of competition, she keeps “practicing by learning to sing songs that catch her fancy” since her voice is her “USP”.

She believes she modulates her song differently for each song, even if it falls under the same genre. According to her, from the very early days of her career, she has constantly been trying to “polish” her voice which helps her enhancing the required voice modulation. She also admits that she tries hard to “put a difference” in her voice texture for each recording to avoid her voice being stereotyped. After listening to her in the song “Manali Trance”, she was asked by many fans if she was high when she recorded it, to which she replied, “‘ I don’t drink or smoke. It’s just my vocal interpretation of it”.

Her vocal tone has been subjected to mixed reviews. The Times of India complimented “the kind of variation” she brings to her voice in the song, “Cheez Badi” and wrote: “While she is known for her party numbers, this song sees her voice take on a rather sultry quality that perfectly matches the mood of the song”. Shreya Paul, from Firstpost, while reviewing the album of De De Pyaar De criticised her “auto-tuned” vocals and the attempt to “sound sexy and naughty”. Similarly, R.M. Vijayakar from India West calls her vocal performances “petulant” which she “mistakes for sensuality”. In the media, Kakkar is often regarded as the voice behind the “party anthems” and “recreated songs”. Due to the numerous contribution to the same, Gulf Today regarded her voice as an overexposure to the “recreation and fast-paced songs”.

Kakkar’s music contains elements of pop, hip hop, and R&B. She admits that she has mostly performed dance numbers which she believes suits her voice the most and complements her energetic vibe, though she expressed her desire to experiment other genres including “soft romantic” songs. Also, she appreciates Sufi music and expresses her fondness over the music of Nusrat Fateh Ali Khan.

Devansh Sharma of Firstpost applauded Kakkar’s “impressive range” where she can switch from a “Dilbar” to the romantic track “Nain Na Jodeen”. Similarly, The Times of India complimented her musical “diversity” where she “nails” the melodic song, Mile Ho Tum, to “perfection” with the different “intensity and passion” as compared to her energetic numbers”. The Asian Age notes that party songs have become almost synonymous with Kakkar and she should consider breaking away from the “mould”.

She becomes omnipresent in numerous recreated song which stirred up several hatred comments to her for “ruining” the original songs. Conversely, she favoured the recreations of old songs and opined that they have been well appreciated and loved by the audience when “good old melodies are given a new touch”; “The only drawback is people have high expectations as they love the old songs. At times, it can go down since there have been songs that haven’t done well so one has to be very careful”. Further elaborating her take on this trend, she said, “even if people claim it takes away the original song, they still hear it. There is a lot of negative audience on social media. They would comment on anything. But they are the ones who are dancing on all these songs”. Most of the re-created songs received mixed reactions from fans of the original version.

Kakkar mentioned that she prefers to release singles over albums since “releasing music albums is not a feasible idea for musicians, as it requires a lot of money”. While she admits that a Bollywood actor featuring in a music video helps an independent song reach a wider audience, she prefers that the musicians feature in the music videos themselves. She also expresses her fondness towards live performance since she “loves being on stage and when I hear fans chant my name and ask for an encore”. According to her, live performance prove the real talent of a singer as there no “no scope for making or rectifying mistakes on stage; you just need to go on. In the recording studio, we can have several retakes”.

Kakkar admits that she has always looked up to her elder sister Sonu, as her singing inspiration and she “guides me on how to sing particular songs”. She named her brother Tony as a constant pillar of strength.

Apart from her siblings, Kakkar mentioned Arijit Singh, Shreya Ghoshal and Sunidhi Chauhan as her favourite music artists. “Like, there have been singers like Kishore Kumar, Mohammed Rafi and Lata Mangeshkar who have defined music and left their legacies, I believe they fit in the same league”. Also inspired by Sonu Nigam’s versatility, she “hopes” that she will be able to sing diverse kinds of music. In spite of the musical artists, she called Govinda an “inspiration” and a “role model” to her. “I have been following him since an age where we ourselves do not have an understanding about life”.

Kakkar has also been influenced by many artists outside the country like John Mayer, Demi Lovato and Ariana Grande. She named Nusrat Fateh Ali Khan, Sukhwinder Singh, Kavitha Krishnamurthy and Honey Singh as some of her favourite and inspiring vocalists.

Kakkar’s work has received praise from several artists. Her co-judge in Indian Idol, Vishal Dadlani praised her for the “impressive progress” from a contestant to judge of the same reality show. Singer Jassi Gill named Kakkar as his favourite playback singer.

Her work has been recognised by several actors, where Kriti Sanon stated that every time she hears Kakkar singing, “it brings a smile to my face”. Actor Sara Ali Khan revealed that she is a huge fan of Kakkar and an “inspiration” to her weight-loss. Govinda referred her as the “female-Govinda” due to her expressions and stated that she is a “very good singer and a nice human being”. Choreographer Farah Khan defined her as a “Rock Star” while actress Mandira Bedi referred her as the next “Indian Shakira”.

Kakkar and actor Himansh Kohli were in a romantic relationship since 2014. In September 2018, they officially announced their relationship on national television and revealed that they will tie the knot soon. However, three months later, the couple broke-up which was hinted by an emotional message she posted on Instagram. In an interview with Bombay Times she opened up about her life post the split and revealed how she regrets “making her personal life so public”. In August 2019, she shared an alarming post on Instagram about “depression” and “thinking of ending her life” after rumours of an affair with an Indian Idol contestant surfaced.