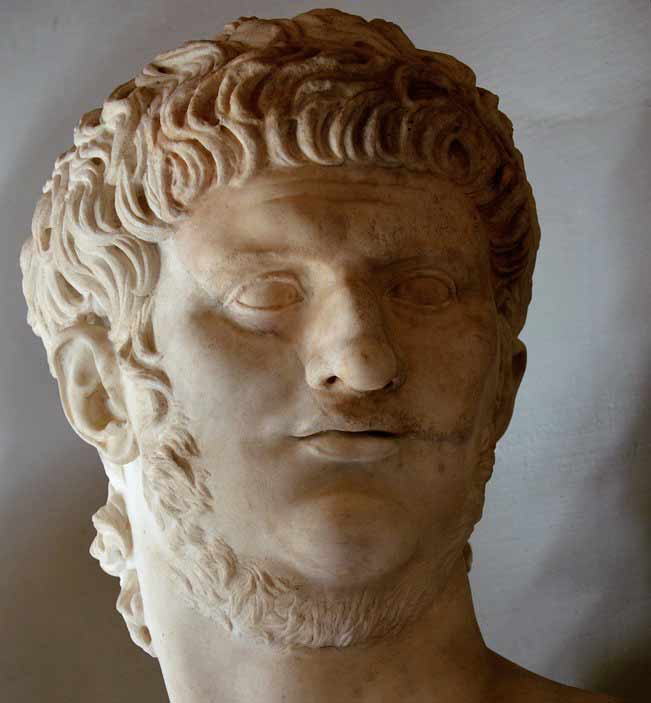 Nero (15 December 37 – 9 June 68 AD) was Roman emperor from 54 to 68, the last ruler of the Julio-Claudian dynasty. Born Lucius Domitius Ahenobarbus, he was the son of Gnaeus Domitius Ahenobarbus and Agrippina the Younger, the sister of Emperor Caligula. Nero’s father died in 40, and his uncle was murdered in 41. Nero’s great-uncle Claudius then ascended the throne. Agrippina married Claudius, who adopted Nero as his heir. Nero succeeded Claudius upon the latter’s death in 54.

During the early years of his reign, Nero was content to be guided by his mother Agrippina, his tutor Seneca, and his Praetorian prefect Sextus Afranius Burrus. Agrippina dominated Nero’s early life and decisions until he cast her off and had her killed five years into his reign. As time passed, he began to play a more active and independent role in government and foreign policy. During his reign, the redoubtable general Corbulo conducted a successful war and negotiated peace with the Parthian Empire. His general Suetonius Paulinus crushed a major revolt in Britain, led by the Iceni Queen Boudica. The Bosporan Kingdom was briefly annexed to the empire, and the First Jewish–Roman War began. Nero focused much of his attention on diplomacy and trade, as well as the cultural life of the empire, ordering theatres built and promoting athletic games. He made public appearances as an actor, poet, musician, and charioteer. In the eyes of traditionalists, this undermined the dignity and authority of his person, status, and office. His extravagant, empire-wide program of public and private works was funded by a rise in taxes that was much resented by the upper classes. In contrast, his populist style of rule remained well-admired among the lower classes of Rome and the provinces until his death and beyond. Various plots against his life were revealed, the leaders of which—most of them Nero’s own courtiers—who would be executed (at least until his final demise).

In AD 68 Vindex, governor of the Gaulish territory Gallia Lugdunensis, rebelled, with support from Galba, governor of Hispania Tarraconensis. Vindex’s revolt failed in its immediate aim, though Nero fled Rome when its discontented civil and military authorities chose Galba as emperor. On 9 June in AD 68, he committed suicide, becoming the first Roman Emperor to do so, after learning that he had been tried in absentia and condemned to death as a public enemy. His death ended the Julio-Claudian dynasty, sparking a brief period of civil wars known as the Year of the Four Emperors.

Nero’s rule is usually associated with tyranny and extravagance. Most Roman sources, including Suetonius and Cassius Dio, offer overwhelmingly negative assessments of his personality and reign; likewise, Tacitus claims that the Roman people thought him compulsive and corrupt. Suetonius tells that many Romans believed that the Great Fire of Rome was instigated by Nero to clear the way for his planned palatial complex, the Domus Aurea. According to Tacitus he was said to have seized Christians as scapegoats for the fire and burned them alive, seemingly motivated not by public justice but by personal cruelty. Some modern historians question the reliability of the ancient sources on Nero’s tyrannical acts, however. A few sources paint Nero in a more favorable light. There is evidence of his popularity among the Roman commoners, especially in the eastern provinces of the Empire, where a popular legend arose that Nero had not died and would return. At least three leaders of short-lived, failed rebellions presented themselves as “Nero reborn” to enlist popular support.

The ancient biographer Suetonius, who was critical of Nero’s ancestors, wrote that Augustus had reproached Nero’s grandfather for his unseemly enjoyment of violent gladiator games. According to Jürgen Malitz, Suetonius tells that Nero’s father was known to be “irascible and brutal”, and that both “enjoyed chariot races and theater performances to a degree not befitting their position.”

Nero’s father, Domitius, died in 40 AD. A few years before his death, Domitius had been involved in a political scandal that, according to Malitz, “could have cost him his life if Tiberius had not died in the year 37.” In the previous year, Nero’s mother Agrippina had been caught up in a scandal of her own. Caligula’s beloved sister Drusilla had recently died and Caligula began to feel threatened by his brother-in-law Marcus Aemilius Lepidus. Agrippina, suspected of adultery with her brother-in-law, was forced to carry the funerary urn after Lepidus’ execution. Caligula then banished his two surviving sisters, Agrippina and Julia Livilla, to a remote island in the Mediterranean Sea. According to The Oxford Encyclopedia of Ancient Greece and Rome, Agrippina was exiled for plotting to overthrow Caligula. Nero’s inheritance was taken from him and he was sent to live with his paternal aunt Domitia Lepida the Younger, the mother of Claudius’ third wife Valeria Messalina.

Caligula’s reign lasted from 37 until 41. He died from multiple stab wounds in January of 41 after being ambushed by his own Praetorian Guard on the Palatine Hill. Claudius succeeded Caligula as Emperor. Agrippina married Claudius in 49 ad and became his fourth wife. By February 49, she had persuaded Claudius to adopt her son Nero. After Nero’s adoption, “Claudius” became part of his name: Nero Claudius Caesar Drusus Germanicus. Claudius had gold coins issued to mark the adoption. Classics professor Josiah Osgood has written that “the coins, through their distribution and imagery alike, showed that a new Leader was in the making.” David Shotter noted that, despite events in Rome, Nero’s step-brother Britannicus was more prominent in provincial coinages during the early 50s.

Nero officially formally entered public life as an adult in 51 ad—he was around 14 years old. When he turned 16, Nero married Claudius’ daughter (his own step-sister), Claudia Octavia. Between the years 51 ad and 53 ad, he gave several speeches on behalf of various communities including the Ilians; the Apameans, requesting a five-year tax reprieve after an earthquake; and the northern colony of Bologna, after their settlement suffered a devastating fire.

Claudius died in 54 ad; many ancient historians claim that he was poisoned by Agrippina. Shotter has written that “Claudius’ death in 54 ad has usually been regarded as an event hastened by Agrippina because of signs that Claudius was showing a renewed affection for his natural son,” but he notes that among ancient sources Josephus was uniquely reserved in describing the poisoning as a rumor. Contemporary sources differ in their accounts. Tacitus says that Locusta prepared the poison, which was served to the Emperor by his food taster Halotus. Tacitus also writes that Agrippina arranged for Claudius’ doctor Xenophon to administer poison, in the event that the Emperor survived. Suetonius differs in some details, but also implicates Halotus and Agrippina. Like Tacitus, Cassius Dio writes that the poison was prepared by Locusta, but in Dio’s account it is administered by Agrippina instead of Halotus. In Apocolocyntosis, Seneca the Younger does not mention mushrooms at all. Agrippina’s involvement in Claudius’ death is not accepted by all modern scholars.

Before Claudius’ death, Agrippina had maneuvered to remove Britannicus’ tutors and replace them with tutors that she had selected. She was also able to convince Claudius to replace with a single commander, Burrus, two prefects of the Praetorian guard who were suspected of supporting Brittanicus. Since Agrippina had replaced the guard officers with men loyal to her, Nero was able to assume power without incident.

In 65 ad, Gaius Calpurnius Piso, a Roman statesman, organized a conspiracy against Nero with the help of Subrius Flavus and Sulpicius Asper, a tribune and a centurion of the Praetorian Guard. According to Tacitus, many conspirators wished to “rescue the state” from the emperor and restore the Republic. The freedman Milichus discovered the conspiracy and reported it to Nero’s secretary, Epaphroditos. As a result, the conspiracy failed and its members were executed including Lucan, the poet. Nero’s previous advisor Seneca was accused by Natalis; he denied the charges but was still ordered to commit suicide as by this point he had fallen out of favor with Nero.

Nero was said to have kicked Poppaea to death in 65 ad, before she could have his second child. Modern historians, noting the probable biases of Suetonius, Tacitus, and Cassius Dio, and the likely absence of eyewitnesses to such an event, propose that Poppaea may have died after miscarriage or in childbirth. Nero went into deep mourning; Poppaea was given a sumptuous state funeral, divine honors, and was promised a temple for her cult. A year’s importation of incense was burned at the funeral. Her body was not cremated, as would have been strictly customary, but embalmed after the Egyptian manner and entombed; it is not known where.

In 67, Nero married Sporus, a young boy who is said to have greatly resembled Poppaea. Nero had him castrated, tried to make a woman out of him, and married him in a dowry and bridal veil. It is believed that he did this out of regret for his killing of Poppaea.