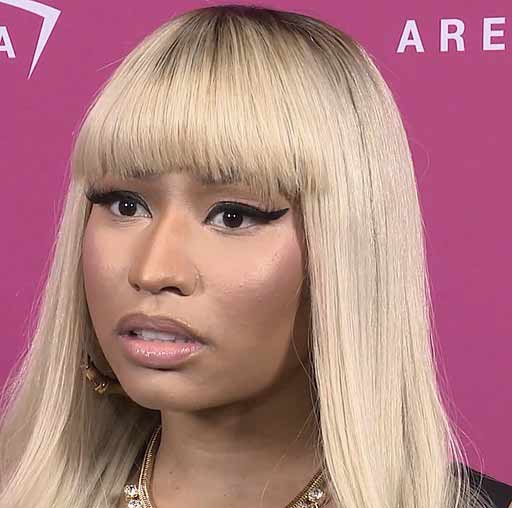 Onika Tanya Maraj-Petty (born December 8, 1982), known professionally as Nicki Minaj, is a Trinidadian-born rapper, singer, songwriter, actress, and model. Born in the Saint James district of Port of Spain and raised in the Queens borough of New York City, she gained public recognition after releasing the mixtapes Playtime Is Over (2007), Sucka Free (2008), and Beam Me Up Scotty (2009).

Early in her career, Minaj was known for her colorful costumes and wigs. Her rapping is distinctive for its fast flow and the use of alter egos and accents, primarily British cockney. After signing with Young Money Entertainment in 2009, Minaj released her first studio album, Pink Friday (2010), which peaked at number one on the US Billboard 200 chart and was certified triple platinum by the Recording Industry Association of America (RIAA). Her second album, Pink Friday: Roman Reloaded, was released in 2012 and debuted atop the charts in several countries. Minaj made her film debut in the 2012 animated film Ice Age: Continental Drift. In 2013, she was a judge on the twelfth season of American Idol. Minaj’s third studio album, The Pinkprint, was released in 2014. She subsequently played supporting roles in the films The Other Woman (2014) and Barbershop: The Next Cut (2016). Her fourth studio album, Queen, was released in 2018.

Cited as one of the most influential female rap artists of all time, Minaj has accumulated the most entries among women of all genres on the Billboard Hot 100 chart. She has topped the Hot 100 twice, as a featured artist on the remix of Doja Cat’s “Say So” and as a lead artist for her collaboration with 6ix9ine, “Trollz”, both in 2020. She has additionally earned multiple top-five entries on the Hot 100 as a lead artist: “Super Bass” in 2011, “Starships” in 2012, and “Bang Bang” and “Anaconda”, both in 2014. Minaj was ranked 15th on Billboard’s list of the top artists of the 2010s, being the highest female rap artist on the list.

Minaj has sold an estimated 100 million records worldwide, making her one of the world’s best selling music artists. Throughout her career, Minaj has received numerous accolades, including six American Music Awards, twelve BET Awards, four MTV Video Music Awards, four Billboard Music Awards, and two Billboard Women in Music Awards. She has also been nominated for 10 Grammy Awards. In 2016, Minaj was included on the annual Time list of the 100 most influential people in the world.

Onika Tanya Maraj was born in Saint James on December 8, 1982, Her father, Robert Maraj, a financial executive and part-time gospel singer, is of Dougla (Afro-Trinidadian mother and Indo-Trinidadian father) descent. Her mother, Carol Maraj, is also a gospel singer with Afro-Trinidadian ancestry. Carol worked in payroll and accounting departments during Minaj’s youth. Minaj’s father was addicted to alcohol and other drugs, and had a violent temper, burning down their house in December 1987. She has an elder brother named Jelani, an older sister named Maya, a younger brother named Micaiah, and a younger sister named Ming.

As a small child, Minaj and a sibling lived with her grandmother in Saint James. Her mother, who had moved to the Bronx in New York City to attend Monroe College, brought the family to Queens when Minaj was five. By then, the family had a house on 147th Street. Minaj recalled, “I don’t think I had a lot of discipline in my household. My mom motivated me, but it wasn’t a strict household. I kind of wanted a strict household.” Minaj successfully auditioned for admission to Fiorello H. LaGuardia High School of Music & Art and Performing Arts, which focuses on visual and performing arts. After graduation, Minaj wanted to become an actress, and she was cast in the Off-Broadway play In Case You Forget in 2001.

At the age of 19, as she struggled with her acting career, she worked as a waitress at a Red Lobster in the Bronx, but was fired for discourtesy to customers. She said she was fired from “at least 15 jobs” for similar reasons.

Minaj briefly signed with Brooklyn group Full Force, in which she rapped in a quartet called The Hoodstars composed of Lou$tar (son of “Bowlegged Lou”), Safaree Samuels (Scaff Beezy) and 7even Up. In 2004, the group recorded the entrance song for WWE Diva Victoria, “Don’t Mess With”, which was featured on the compilation album ThemeAddict: WWE The Music, Vol.6. Minaj later left Full Force and uploaded songs on her Myspace profile, sending several of her songs to people in the music industry. At the time, she was managed by Debra Antney. Later, Fendi, CEO of Brooklyn label Dirty Money Entertainment, signed Minaj to his label in 2007 under a 180-day contract. Originally adopting the stage name Nicki Maraj, she eventually changed it to Nicki Minaj stating that “my real name is Maraj. Fendi flipped it when he met me because I had such a nasty flow!”

Minaj released her first mixtape, Playtime Is Over, on July 5, 2007, and her second, Sucka Free, on April 12, 2008. That year, she was named Female Artist of the Year at the 2008 Underground Music Awards. She released her third mixtape, Beam Me Up Scotty, on April 18, 2009; it received favorable coverage on BET and MTV. One of its tracks, “I Get Crazy”, reached number 20 on the U.S. Billboard Hot Rap Songs chart and number 37 on the Hot R&B/Hip-Hop Songs chart. After Minaj was discovered by fellow rapper Lil Wayne, in August 2009 it was reported that she signed a recording contract with his Young Money Entertainment. That November, she appeared with Gucci Mane and Trina on the remix of “5 Star Bitch” by Yo Gotti. Minaj also appeared on “BedRock” and “Roger That” on the compilation album, We Are Young Money (2009). The singles peaked at numbers two and 56, respectively, on the U.S. Billboard Hot 100; their parent album reached number-nine on the U.S. Billboard 200, and was certified gold by the Recording Industry Association of America (RIAA). At Jay-Z’s suggestion, Robin Thicke featured Minaj on his single “Shakin’ It 4 Daddy”.

In her song “All Things Go”, Minaj revealed that she had an abortion as a teenager. Minaj has said that although it has “haunted” her, she stands by her decision.

In July 2011, her cousin Nicholas Telemaque was murdered near his home in Brooklyn, an incident she references in her songs “All Things Go” and “Champion”.

Early in her career, Minaj claimed to be bisexual. However, she eventually stated in a Rolling Stone interview that she only said that to get attention: “I think girls are sexy, but I’m not going to lie and say that I date girls.” In May 2020, she once again addressed her sexuality, stating in a verse on Doja Cat’s “Say So” remix, “Used to be bi, but now I’m just hetero.” The lyric was met with controversy from the LGBTQ+ community, with bisexual erasure cited as one of the problematic aspects of Minaj’s words.

In late 2014, Minaj separated from her longtime boyfriend Safaree Samuels, whom she had dated since 2000. Several tracks on The Pinkprint are believed to have been inspired by the end of their relationship. Minaj began dating rapper Meek Mill in early 2015. In January 2017, she announced that she had ended their relationship. In December 2018, Minaj began dating her childhood friend Kenneth “Zoo” Petty and filed for a marriage license in August 2019.[386] She announced that they had officially married on October 21. She hyphenated his last name to hers upon marriage, becoming Maraj-Petty. Her husband registered as sex offender in California in 2020, having been convicted of attempted rape in the first degree in 1995 in New York.

In November 2017, Minaj’s brother Jelani was convicted of predatory sexual assault against a child and endangering the welfare of a child. On January 27, 2020, he was sentenced by Nassau County Supreme Court Judge Robert McDonald to 25 years to life.

In July 2020, Minaj announced via Instagram she is expecting her first child.

Minaj won the American Music Awards for Favorite Rap/Hip-Hop Artist and Favorite Rap/Hip-Hop Album in three different years for her first three albums. She has won the MTV Video Music Award for Best Hip-Hop Video three times, for “Super Bass”, “Anaconda”, and “Chun-Li”, and has won the Best Female Video Award once, for “Starships”. Billboard Women in Music ceremony honoured Minaj with the Game Changer Award in 2019.