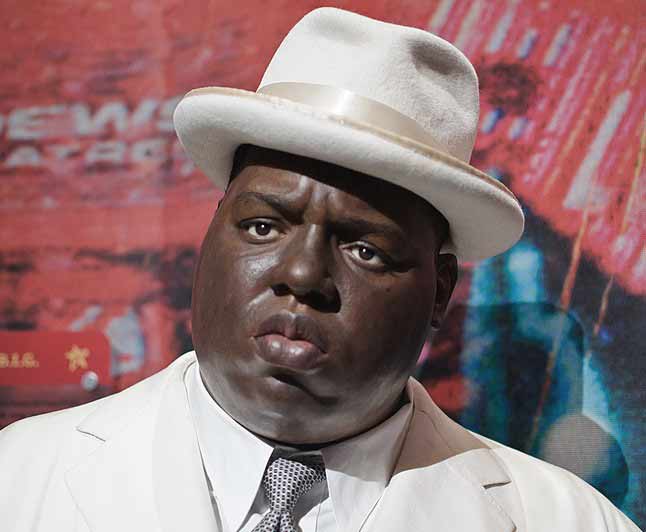 Cause of Death: Homicide by gunshots

Christopher George Latore Wallace (May 21, 1972 – March 9, 1997), better known by his stage names The Notorious B.I.G., Biggie Smalls, or simply Biggie, was an American rapper and songwriter. Rooted in the New York rap scene and gangsta rap traditions, he is considered one of the greatest rappers of all time. The Notorious B.I.G. became known for his distinctive laidback lyrical delivery, offsetting the lyrics’ often grim content and his own intimidating appearance. His music was often semi-autobiographical, telling of hardship and criminality, but also of debauchery and celebration.

Born and raised in Brooklyn, New York City, The Notorious B.I.G. signed to Sean “Puffy” Combs’ label Bad Boy Records as it launched in 1993, and gained exposure through features on several, other artists’ singles that year. His debut album Ready to Die (1994) was met with widespread critical acclaim, and produced his signature songs “Juicy” and “Big Poppa”. The album made him the central figure in East Coast hip hop, and restored New York’s visibility at a time when the West Coast hip hop scene was dominating hip hop music. The Notorious B.I.G. was awarded the 1995 Billboard Music Awards’ Rapper of the Year. The following year, he led his protégé group Junior M.A.F.I.A., a team of himself and longtime friends, including Lil’ Kim, to chart success.

During 1996, while recording his second album, The Notorious B.I.G. became ensnarled in the escalating East Coast–West Coast hip hop feud. Following Tupac Shakur’s death (aka “2Pac”) in a drive-by shooting in Las Vegas in September 1996, speculations of involvement by criminal elements orbiting the Bad Boy circle circulated. On March 9, 1997, while visiting Los Angeles, Wallace was murdered in a drive-by shooting. The assailant remains unidentified. The Notorious B.I.G.’s second album Life After Death, a double album, was released two weeks later. It reached number one on the Billboard 200, and eventually achieved a Diamond certification in the US.

With two more posthumous albums released, The Notorious B.I.G. has accrued certified sales of over 28 million copies in the United States, including 21 million albums. Rolling Stone has called him the “greatest rapper that ever lived,” and Billboard named him the greatest rapper of all time. The Source magazine named him the greatest rapper of all time in its 150th issue. In 2006, MTV ranked him at No. 3 on their list of The Greatest MCs of All Time, calling him possibly “the most skillful ever on the mic”. In 2020, The Notorious B.I.G. was inducted into the Rock and Roll Hall of Fame.

Wallace was born at St. Mary’s Hospital in the Brooklyn borough of New York City on May 21, 1972, the only child of Jamaican immigrant parents. His mother, Voletta Wallace, was a preschool teacher, while his father, Selwyn George Latore, was a welder and politician. His father left the family when Wallace was two years old, and his mother worked two jobs while raising him. Wallace grew up at 226 St. James Place in Brooklyn’s Clinton Hill, near the border with Bedford-Stuyvesant. Wallace excelled at Queen of All Saints Middle School, winning several awards as an English student. He was nicknamed “Big” because he was overweight by the age of 10. Wallace claimed to have begun dealing drugs at about age 12. His mother, often at work, first learned of this during his adulthood.

He began rapping as a teenager, entertaining people on the streets, and performed with local groups, the Old Gold Brothers as well as the Techniques. At his request, Wallace transferred from Bishop Loughlin Memorial High School in Fort Greene to George Westinghouse Career and Technical Education High School in Downtown Brooklyn, which future rappers DMX, Jay-Z, and Busta Rhymes were also attending. According to his mother, Wallace was still a good student but developed a “smart-ass” attitude at the new school. At age 17, Wallace dropped out of school and became more involved in crime. In 1989, he was arrested on weapons charges in Brooklyn and sentenced to five years’ probation. In 1990, he was arrested on a violation of his probation. A year later, Wallace was arrested in North Carolina for dealing crack cocaine. He spent nine months in jail before making bail.

After release from jail, Wallace made a demo tape, Microphone Murderer, while calling himself Biggie Smalls, alluding both to Calvin Lockhart’s character in the 1975 film Let’s Do It Again and to his own stature and obesity, 6 feet 3 inches (1.91 m) and 300 to 380 lb (140–170 kg). Although Wallace reportedly lacked real ambition for the tape, local DJ Mister Cee, of Big Daddy Kane and Juice Crew association, discovered and promited it, thus heard by The Source rap magazine’s editor in 1992.

On August 8, 1993, Wallace’s longtime girlfriend gave birth to his first child, T’yanna, although the couple had split by then. A high-school dropout, Wallace promised his daughter “everything she wanted”, in his reasoning that if he had had the same in childhood, he would have graduated at the top of his class. Although he continued dealing drugs, Combs discovered that and obliged him to quit. Later that year, Wallace gained exposure on a remix of Mary J. Blige’s single “Real Love”. Having found his moniker Biggie Smalls already claimed, he took a new one, holding for good, The Notorious B.I.G.

The “Real Love” remix single was followed by another remix of a Mary J. Blige song, “What’s the 411?”. Wallace’s successes continued, if to a lesser extents, on remixes of Neneh Cherry’s song “Buddy X” and of reggae artist Super Cat’s song “Dolly My Baby”, also featuring Combs, all in 1993. In April, Wallace’s solo track “Party and Bullshit” was released on the Who’s the Man? soundtrack. In July 1994, he appeared alongside LL Cool J and Busta Rhymes on a remix of hiw own labelmate Craig Mack’s “Flava in Ya Ear”, the remix reaching No. 9 on the Billboard Hot 100.

In February 1997, Wallace traveled to California to promote Life After Death and record a music video for its lead single, “Hypnotize”. On March 5, he gave a radio interview with The Dog House on KYLD in San Francisco. In the interview, he stated that he had hired a security detail since he feared for his safety, but that this was due to being a celebrity figure in general and not specifically because he was a rapper.

On March 8, Wallace presented an award to Toni Braxton at the 11th Annual Soul Train Music Awards in Los Angeles and was booed by some of the audience. He then attended an after-party hosted by Vibe and Qwest Records at the Petersen Automotive Museum. Guests included Evans, Aaliyah, Combs, and members of the Crips and Bloods gangs. The next day at 12:30 a.m. PST, after the fire department closed the party early due to overcrowding, Wallace left with his entourage in two GMC Suburbans to return to his hotel. He traveled in the front passenger seat alongside associates Damion “D-Roc” Butler, Lil’ Cease, and driver Gregory “G-Money” Young. Combs traveled in the other vehicle with three bodyguards. The two trucks were trailed by a Chevrolet Blazer carrying Bad Boy director of security Paul Offord.

By 12:45 a.m., the streets were crowded with people leaving the party. Wallace’s truck stopped at a red light 50 yards (46 m) from the Petersen Automotive Museum, and a black Chevy Impala pulled up alongside it. The Impala’s driver, an unidentified African-American man dressed in a blue suit and bow tie, rolled down his window, drew a 9 mm blue-steel pistol, and fired at Wallace’s car. Four bullets hit Wallace and his entourage subsequently rushed him to Cedars-Sinai Medical Center, where doctors performed an emergency thoracotomy, but he was pronounced dead at 1:15 a.m. He was 24 years old. His autopsy, which was released 15 years after his death, showed that only the final shot was fatal; it entered through his right hip and struck his colon, liver, heart, and left lung before stopping in his left shoulder.

Wallace’s funeral was held at the Frank E. Campbell Funeral Chapel in Manhattan on March 18. There were around 350 mourners at the funeral, including Lil’ Cease, Queen Latifah, Flava Flav, Mary J. Blige, Lil’ Kim, Run–D.M.C., DJ Kool Herc, Treach, Busta Rhymes, Salt-N-Pepa, DJ Spinderella, Foxy Brown, and Sister Souljah. After the funeral, his body was cremated and the ashes were given to his family.