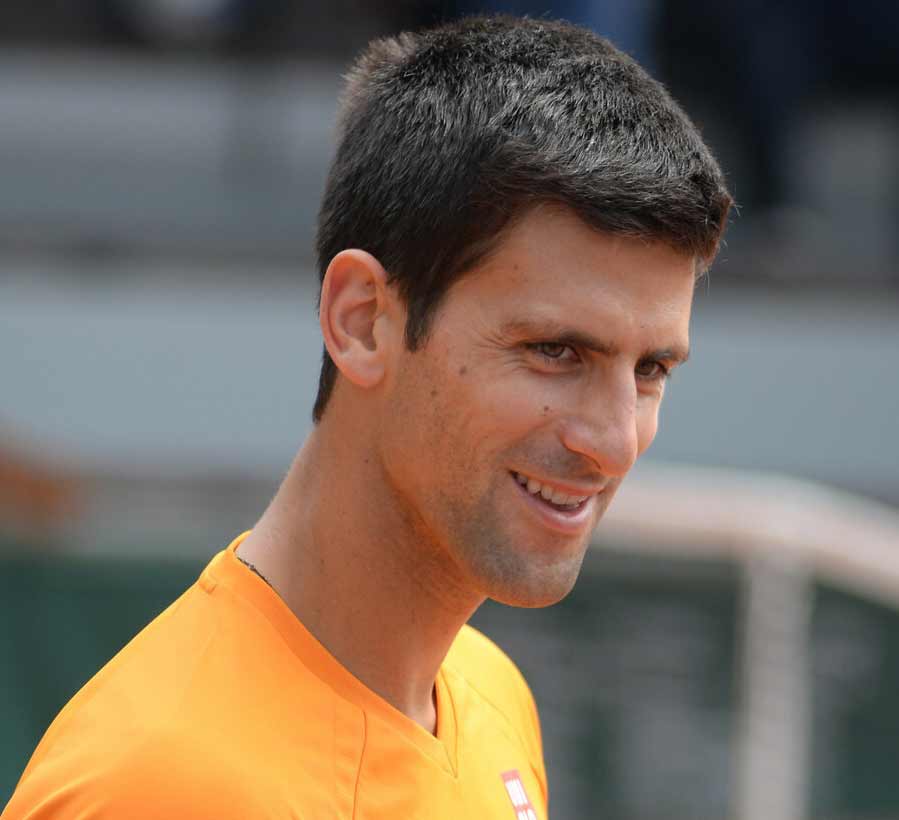 Novak Djokovic (Serbian: Новак Ђоковић, romanized: Novak Đoković, pronounced [nôʋaːk dʑôːkoʋitɕ] (About this soundlisten); born 22 May 1987) is a Serbian professional tennis player who is currently ranked world No. 1 in men’s singles tennis by the Association of Tennis Professionals (ATP).

Djokovic has won 17 Grand Slam singles titles, the third-most in history for a male player, five ATP Finals titles, 34 ATP Tour Masters 1000 titles, 14 ATP Tour 500 titles, and has held the No. 1 spot in the ATP rankings for over 280 weeks. In majors, he has won a record eight Australian Open titles, five Wimbledon titles, three US Open titles, and one French Open title. By winning the 2016 French Open, he became the eighth player in history to achieve the Career Grand Slam and the third man to hold all four major titles at once, the first since Rod Laver in 1969 and the first ever to do so on three different surfaces. He is the only male player to have won all nine of the Masters 1000 tournaments. Djokovic was also a member of Serbia’s winning Davis Cup team in 2010 and in the 2020 ATP Cup.

Djokovic is the first Serbian player to be ranked No. 1 by the ATP and the first male player representing Serbia to win a Grand Slam singles title. He is a six-time ITF World Champion and a five-time ATP year-end No. 1 ranked player. Djokovic has won numerous awards, including the Laureus World Sports Award for Sportsman of the Year (four times) and the 2011 BBC Overseas Sports Personality of the Year award. He is also a recipient of the Order of St. Sava, the Order of Karađorđe’s Star, and the Order of the Republika Srpska.

Novak Djokovic (Nole) was born on 22 May 1987 in Belgrade, SR Serbia, Yugoslavia, to parents Srđan and Dijana (née Žagar). Novak’s father Srđan was born in a village near Trepča, in Kosovo, and in the early 1980s, moved his family to Belgrade. His two younger brothers, Marko and Djordje, have also played professional tennis.

A resident of Monte Carlo, Djokovic was coached by former Slovak tennis player Marián Vajda from 2006 until Boris Becker took over the role of head coach in December 2013. Djokovic is a self-described fan of languages, speaking Serbian, English, French, German, and Italian.

He met his future wife, Jelena Ristić, in high school, and began dating her in 2005. The two became engaged in September 2013, and on 10 July 2014 the couple got married on Sveti Stefan in Montenegro, while a church wedding was held in the same place, on 12 July 2014, in the Church of Saint Stephen (Serbian: Црква Светог Архиђакона Стефана) which belongs to Praskvica Monastery. On 24 April 2014, Djokovic announced that he and Ristić were expecting their first child. Their son, Stefan, was born on 21 October 2014 in Nice, France. Their daughter, Tara, was born on 2 September 2017.

Djokovic began playing tennis at the age of four. In the summer of 1993, the six-year-old was spotted by Yugoslav tennis player Jelena Genčić at Mount Kopaonik, where Djokovic’s parents ran a fast-food parlour. Upon seeing the child Djokovic playing tennis, she stated: “This is the greatest talent I have seen since Monica Seles.”

Genčić worked with young Djokovic over the following six years before realizing that, due to his rapid development, going abroad in search of increased level of competition was the best option for his future. To that end, she contacted Nikola Pilić and in September 1999 the 12-year-old moved to the Pilić tennis academy in Oberschleißheim, Germany, spending four years there. At the age of 14, he began his international career, winning European championships in singles, doubles, and team competition.

Djokovic is a member of the “Champions for Peace” club, a group of famous elite athletes committed to serving peace in the world through sport, created by Peace and Sport, a Monaco-based international organization.

Djokovic has been reported to meditate for up to an hour a day at the Buddhist Buddhapadipa Temple in Wimbledon, and is close to monks in the complex. He has spoken of the positive power of meditation.