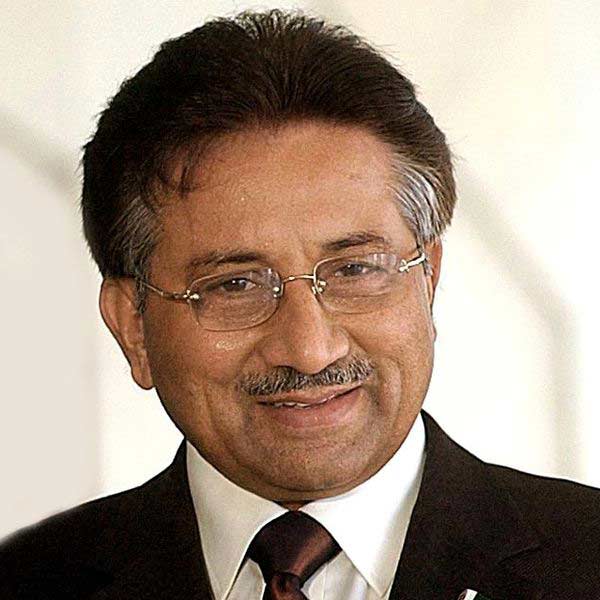 Pervez Musharraf (Urdu: پرویز مشرف‎ Parvez Muśarraf; born 11 August 1943) is a Pakistani former four-star general and politician who became the tenth president of Pakistan after the successful 1999 Pakistani coup d’état. He held the presidency from 2001 until 2008, when he tendered his resignation to avoid impeachment.

Born in Delhi during the British Raj, Musharraf was raised in Karachi and Istanbul. He studied mathematics at Forman Christian College in Lahore and was also educated at the Royal College of Defence Studies in the United Kingdom. Musharraf entered the Pakistan Military Academy in 1961 and was commissioned to the Pakistan Army in 1964, playing an active role in the Afghan civil war. Musharraf saw action during the Indo-Pakistani War of 1965 as a second lieutenant. By the 1980s, he was commanding an artillery brigade. In the 1990s, Musharraf was promoted to major general and assigned an infantry division, and later commanded the Special Services Group. Soon after, he also served as deputy military secretary and director general of military operations.

Musharraf rose to national prominence when he was promoted to four-star general by Prime Minister Nawaz Sharif in 1998, making Musharraf the head of the armed forces. He led the Kargil infiltration that almost brought India and Pakistan to a full-fledged war in 1999. After months of contentious relations between Sharif and Musharraf, Sharif unsuccessfully attempted to remove Musharraf as the army’s leader. In retaliation, the army staged a coup d’état in 1999, which allowed Musharraf to take over Pakistan as president in 2001. He subsequently placed Sharif under strict house arrest before launching official criminal proceedings against him.

Musharraf initially remained the Chairman of the Joint Chiefs and the Chief of the Army Staff, relinquishing the former position upon confirmation of his presidency. However, he remained the Army Chief until retiring in 2007. The initial stages of his presidency featured controversial wins in a state referendum to grant him a five-year term limit, and a general election in 2002. During his presidency, he advocated for the Third Way, adopting a synthesis of conservatism and socialism. Musharraf reinstated the constitution in 2002, though it was heavily amended within the Legal Framework Order. He appointed Shaukat Aziz to replace Sharif in 2004, and oversaw directed policies against terrorism, becoming a key player in the American-led war on terror.

Musharraf pushed for social liberalism under his enlightened moderation program and promoted economic liberalisation, while he also banned trade unions. Musharraf’s presidency coincided with a rise of overall gross domestic product by around 50%; in the same period, domestic savings declined, and economic inequality rose at a rapid rate. Musharraf’s government has also been accused of human rights abuses, and he survived a number of assassination attempts during his presidency. When Aziz departed as prime minister, and after approving the suspension of the judicature in 2007, Musharraf’s position weakened dramatically. Tendering his resignation to avoid impeachment in 2008, Musharraf emigrated to London in a self-imposed exile. His legacy as leader is mixed; he saw the emergence of a more assertive middle class, but an open disregard for civilian institutions greatly weakened Pakistan.

Musharraf returned to Pakistan in 2013 to participate in that year’s general election, but was disqualified from participating after the country’s high courts issued arrest warrants for him and Aziz for their alleged involvement in the assassinations of Nawab Akbar Bugti and Benazir Bhutto. Upon Sharif’s re-election in 2013, he initiated high treason charges against Musharraf for implementing emergency rule and suspending the constitution in 2007. The case against Musharraf continued after Sharif’s removal from office in 2017, the same year in which Musharraf was declared an “absconder” in the Bhutto assassination case by virtue of moving to Dubai. In 2019, Musharraf was sentenced to death in absentia for the treason charges, although, the death sentence was later annulled by the Lahore High Court.

Musharraf was born on 11 August 1943 to an Urdu-speaking family in Delhi, British India, the son of Syed Musharrafuddin and his wife Begum Zarin Musharraf. His family were Muslims who were also Sayyids, claiming descent from prophet Muhammad. Syed Musharraf graduated from Aligarh Muslim University and entered the civil service, which was an extremely prestigious career under British rule. He came from a long line of government officials as his great-grandfather was a tax collector while his maternal grandfather was a qazi (judge). Musharraf’s mother Zarin, born in the early 1920s, grew up in Lucknow and received her schooling there, after which she graduated from Indraprastha College at Delhi University, taking a bachelor’s degree in English literature. She then married and devoted herself to raising a family. His father, Syed, was an accountant who worked at the foreign office in the British Indian government and eventually became an accounting director.

Musharraf was the second of three children, all boys. His elder brother, Javed Musharraf, based in Rome, is an economist and one of the directors of the International Fund for Agricultural Development. His younger brother, Naved Musharraf, is an anaesthesiologist based in Illinois, US.

At the time of his birth, Musharraf’s family lived in a large home that belonged to his father’s family for many years called Nehar Wali Haveli, which means “House Next to the Canal”. Sir Syed Ahmed Khan’s family lived next door. It is indicative of “the family’s western education and social prominence” that the house’s title deeds, although written entirely in Urdu, were signed by Musharraf’s father in English.

Musharraf was four years old when India achieved independence and Pakistan was created as the homeland for India’s Muslims. His family left for Pakistan in August 1947, a few days before independence. His father joined the Pakistan Civil Services and began to work for the Pakistani government; later, his father joined the Foreign Ministry, taking up an assignment in Turkey. In his autobiography In the Line of Fire: A Memoir, Musharraf elaborates on his first experience with death, after falling off a mango tree.

Musharraf’s family moved to Ankara in 1949, when his father became part of a diplomatic deputation from Pakistan to Turkey. He learned to speak Turkish. He had a dog named Whiskey that gave him a “lifelong love for dogs”. He played sports in his youth. In 1956, he left Turkey and returned to Pakistan in 1957 where he attended Saint Patrick’s School in Karachi and was accepted at the Forman Christian College University in Lahore. At Forman, Musharraf chose mathematics as a major in which he exceled academically, but later developed an interest in economics.

Musharraf is the second son of his parents and has two brothers—Javed and Naved. Javed retired as a high-level official in Pakistan’s civil service. Naved is an anesthesiologist who has lived in Chicago since completing his residency training at Loyola University Medical Center in 1979.

Musharraf married Sehba, who is from Karachi, on 28 December 1968. They have a daughter, Ayla, an architect married to film director Asim Raza, and a son, Bilal. He also has close family ties to the prominent Kheshgi family.

Musharraf published his autobiography—In the Line of Fire: A Memoir—in 2006.