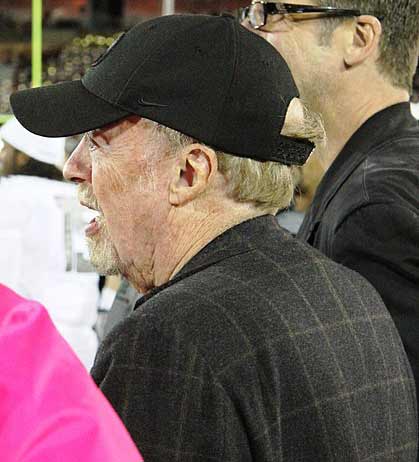 Philip Hampson Knight (born February 24, 1938), is an American billionaire businessman and philanthropist. He is the co-founder and chairman emeritus of Nike, Inc., and was previously chairman and CEO of the company. As of July 23, 2020, Knight was ranked by Forbes as the 26th richest person in the world, with an estimated net worth of US$39.2 billion. He is also the owner of the stop motion film production company Laika.

Knight has donated hundreds of millions of dollars to each of his alma maters, as well as Oregon Health & Science University. He has donated over $2 billion to the three institutions.

Phil Knight was born in Portland, Oregon to Bill Knight, a lawyer turned newspaper publisher, and his wife, Lota (Hatfield) Knight. Knight grew up in the Portland neighborhood of Eastmoreland, and attended Cleveland High School. According to one source, “When his father refused to give him a summer job at his newspaper [the now defunct Oregon Journal], believing that his son should find work on his own,” Knight “went to the rival Oregonian, where he worked the morning shift tabulating sports scores and every morning ran home the full seven miles.”

Knight continued his education at the University of Oregon (UO), in Eugene, where he is a graduate brother of Phi Gamma Delta fraternity, was a sports reporter for the Oregon Daily Emerald and earned a journalism degree in 1959.

As a middle-distance runner at UO, his personal best was 1 mile (1.6 km) in 4 minutes, 13 seconds, and he won varsity letters for his track performances in 1957, 1958 and 1959. In 1977, together with Bowerman and Geoff Hollister, Knight founded an American running team called Athletics West.

Before the Blue Ribbon Sports business that would later become Nike flourished, Knight was a Certified Public Accountant (CPA), firstly with Coopers & Lybrand, and then Price Waterhouse. Knight then became an accounting professor at Portland State University (PSU).

Immediately after graduating from the University of Oregon, Knight enlisted in the army and served one year on active duty and seven years in the Army Reserve. He next enrolled at Stanford Graduate School of Business, where, for his small business class, Knight produced a paper, “Can Japanese Sports Shoes Do to German Sports Shoes What Japanese Cameras Did to German Cameras?,” that essentially premised his eventual foray into selling running shoes. His ambition was to import high-quality and low-cost running shoes from Japan into the American market. He graduated with a master’s degree in business administration from Stanford in 1962.

Knight set out on a trip around the world after graduation, during which he made a stop in Kobe, Japan in November 1962. It was there that he discovered Tiger brand running shoes, manufactured in Kobe by the Onitsuka Co. Impressed by the quality and low cost of the shoes, Knight called Mr. Onitsuka, who agreed to meet with him. By the end of the meeting, Knight had secured Tiger distribution rights for the western United States.

The first Tiger samples would take more than a year to be shipped to Knight; during that time he found a job as an accountant in Portland. When Knight finally received the shoe samples, he mailed two pairs to Bowerman at the University of Oregon, hoping to gain both a sale and an influential endorsement. To Knight’s surprise, Bowerman not only ordered the Tiger shoes, but also offered to become a partner with Knight and provide product design ideas. The two men agreed to a partnership by handshake on January 25, 1964, the birth date of Blue Ribbon Sports (BRS), the company that would later become Nike.

Knight’s first sales were made out of a now storied green Plymouth Valiant automobile at track meets across the Pacific Northwest. By 1969, these early sales allowed Knight to leave his accountant job and work full-time for Blue Ribbon Sports.

Nike’s “swoosh” logo, now considered one of the most powerful logos in the world, was commissioned for US$35 from graphic design student Carolyn Davidson in 1971. According to Nike’s website, Knight said at the time: “I don’t love it, but it will grow on me.” In September 1983, Davidson was given an undisclosed amount of Nike stock for her contribution to the company’s brand. On the Oprah television program in April 2011, Knight claimed he gave Davidson “A few hundred shares” when the company went public.

At Nike, Knight developed personal relationships with some of the world’s most recognizable athletes, including Michael Jordan and Tiger Woods.

Following mainstream success in the late 1990s, Will Vinton Studios animation company sought external investors due to rapid growth, including Knight, who assumed a 15 percent stake in the company, in 1998, and facilitated the employment of his son Travis– who had graduated from PSU following an unsuccessful attempt at a rap music career –as an animator.

Citing mismanagement, Knight eventually purchased Will Vinton Studios and assumed control of the company’s board with the cooperation of Nike executives. In late 2003, Knight appointed his son to the board and, after Vinton had stepped down— prior to leaving the company with a severance package —Knight rebranded the company Laika. He then invested US$180 million into Laika, and the studio released its first feature film, Coraline, in stop motion, in 2009. Coraline was a financial success and Travis Knight was then promoted into the roles of Laika CEO and president.

In May 2004, two years after Knight bought Vinton, his son Matthew, aged 34 years, traveled to El Salvador to film a fund-raising video for Christian Children of the World, a Portland nonprofit organization. However, while scuba diving with his colleagues Vincenzo Iannuzzelli and Robert McDonell in Lake Ilopango, near San Salvador, he died immediately from a heart attack 150 feet (46 m) underwater due to an undetected congenital heart defect. Knight and Travis traveled to El Salvador to return Matthew Knight’s body to the U.S. Laika Studio’s 2005 short film Moongirl was dedicated to Matthew’s memory.

Knight resigned as the CEO of Nike on November 18, 2004, several months after his son Matthew’s funeral, but retained the position of chairman of the board. Knight’s replacement was William Perez, former CEO of S.C. Johnson & Son, Inc., who was eventually replaced by Mark Parker in 2006.

In 2011, the Matthew Knight Arena at the University of Oregon was named in his honor.

During the 2009-2010 period, Knight was the largest single contributor to the campaign to defeat Oregon Ballot Measures 66 and 67, which, once passed, increased income tax on some corporations and high-income individuals.

In June 2015, Knight and Nike announced that he would step down as the company’s chairman, with president and CEO Mark Parker to succeed him. Knight’s retirement from the Nike board took effect at the end of June 2016. In September 2017, Knight decided to come out of retirement to put black back in the UNC jerseys for the Phil Knight Classic in Portland, Oregon.

Knight’s memoir, Shoe Dog, was released on April 26, 2016 by Simon & Schuster, was rated fifth on The New York Times Best Seller list for business books in July 2018, and details the building of the Nike brand, from importing Japanese shoes to being part of a federal investigation.

Knight met his wife, Penelope “Penny” Parks, while he was working at Portland State University and the pair were married on September 13, 1968. They own a home in La Quinta, California.

Knight’s son, Matthew, died in a scuba diving accident in El Salvador in 2004.