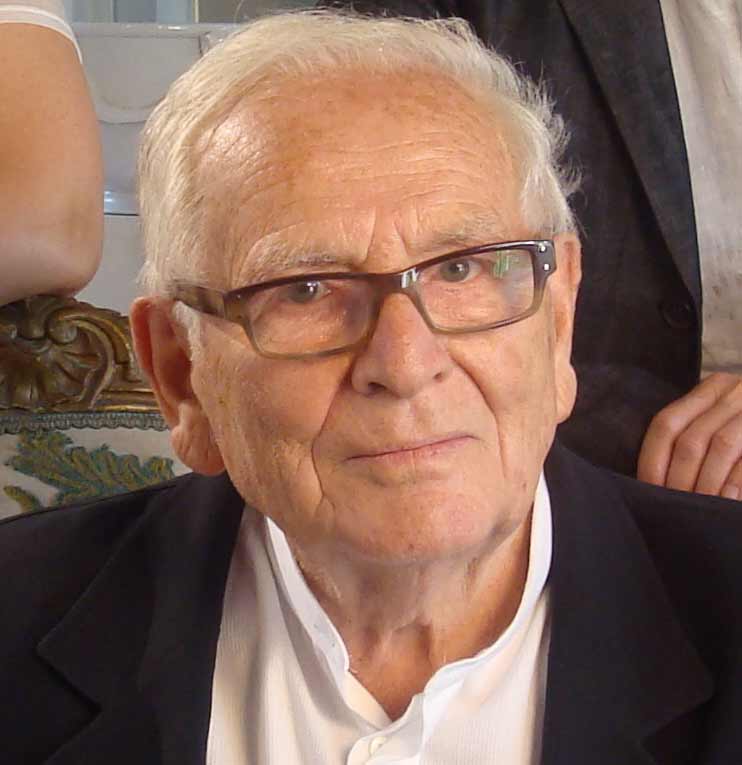 Pierre Cardin (born Pietro Costante Cardin on 2 July 1922) is an Italian-born naturalised-French fashion designer. He is known for his avant-garde style and his Space Age designs. He prefers geometric shapes and motifs, often ignoring the female form. He advanced into unisex fashions, sometimes experimental, and not always practical. He founded his fashion house in 1950 and introduced the “bubble dress” in 1954.

Cardin was born near Treviso. His parents were wealthy landowners, but to escape fascism they left Italy and settled in France in 1924.[5] His father, a wealthy French wine merchant, wished him to study architecture, but from childhood he was interested in dressmaking.

Cardin was educated in central France. Beginning his career early, at age 14 he worked as a clothier’s apprentice, learning the basics of fashion design and construction. In 1939, he left home to work for a tailor in Vichy, where he began making suits for women. During World War II, he worked in the Red Cross, launching humanitarian interests that continue to this day.

Cardin moved to Paris in 1945. There, he studied architecture and worked with the fashion house of Paquin after World War II. He worked with Elsa Schiaparelli until he became head of Christian Dior’s tailleure atelier in 1947, but was denied work at Balenciaga.

Cardin founded his own house in 1950. His career was launched when he designed about 30 of the costumes for “the party of the century”, a masquerade ball at Palazzo Labia in Venice on 3 September 1951, hosted by the palazzo’s owner, Carlos de Beistegui. He began with haute couture in 1953. He was the first couturier to turn to Japan as a high fashion market when he travelled there in 1959. That same year, he was expelled from the Chambre Syndicale for launching a ready-to-wear collection for the Printemps department store as the first couturier in Paris, but was soon reinstated.

During the 1960s, Cardin began a practice that is now commonplace by creating the system of licences that he was to apply to fashion. A clothing collection launched around this period surprised all by displaying the designer’s logo on the garments for the first time. As haute couture began to decline, ready-to-wear soared as well as[clarification needed] Cardin’s designs. He was the first to combine the “mini” and the “maxi” skirts of the 1970s. He introduced a new hemline that had long pom-pom panels or fringe that swayed as the body moved.

Beginning in the 1970s, Cardin set another new trend: “mod chic”. This trend holds true for form or for a combination of forms, which did not exist at the time. He was the first to combine extremely short and ankle length pieces. He made dresses with slits and batwing sleeves with dimensions, and mixed circular movement and gypsy skirts with structured tops. These creations allowed for the geometric shapes that captivated him to be contrasted, with both circular and straight lines. Cardin was an icon for starting this popular fashion movement of the early 1970s.

Inspired by space travel and exploration, Cardin visited NASA (National Aeronautics and Space Administration) in 1970, where he tried on the original space suit worn by the first human to set foot on the moon, Neil Armstrong. Cardin loved the space suit so much, he created his own design for NASA in 1970.

Cardin resigned from the Chambre Syndicale in 1966 and began showing his collections in his own venue, the “Espace Cardin” (opened 1971) in Paris, formerly the “Théâtre des Ambassadeurs”, near the Embassy of the United States. The Espace Cardin is also used to promote new artistic talents, like theater ensembles, musicians, and others.[citation needed] He also designed uniforms for Pakistan International Airlines, which were introduced from 1966 to 1971 and became an instant hit.

In 1971, Cardin redesigned the Barong Tagalog, a national costume of the Philippines, by opening the front, removing the cuffs that needed cufflinks, flaring the sleeves, and minimizing the embroidery. It was also tapered to the body, in contrast with the traditional loose-fitting design and it also had a thicker collar with sharp and pointed cuffs. A straight-cut design was favored by President Ferdinand Marcos.

In 1975, Cardin opened his first furniture boutique on rue du Faubourg-Saint-Honore. His furniture designs were highly inspired by his fashion designs. In both 1977 and 1979, he was awarded the Cartier Golden Thimble by French haute couture for most creative collection of the season. He was a member of the Chambre Syndicale de la Haute Couture et du Prêt-à-Porter from 1953 to 1993.

Like many other designers today, Cardin decided in 1994 to show his collection only to a small circle of selected clients and journalists. After a break of 15 years, he showed a new collection to a group of 150 journalists at his bubble home in Cannes.

A biography called ” Pierre Cardin, his fabulous destiny ” by Sylvana Lorenz was published in 2006 by number 1 éditions, Calmann-Levy.