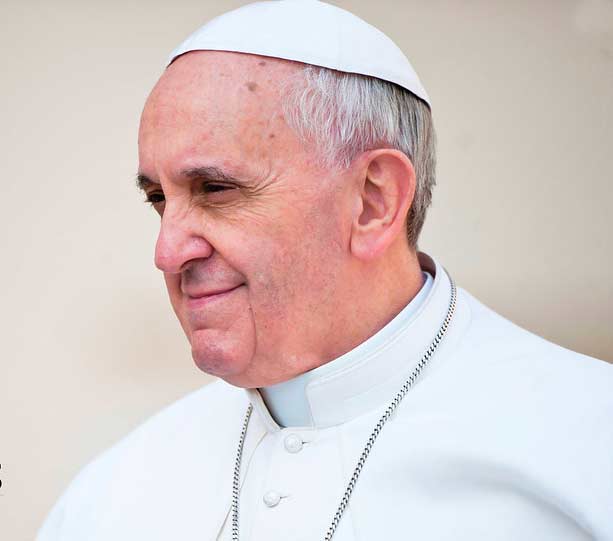 Pope Francis (Latin: Franciscus; Italian: Francesco; Spanish: Francisco; born Jorge Mario Bergoglio, 17 December 1936) is the head of the Catholic Church and sovereign of the Vatican City State. Francis is the first Jesuit pope, the first from the Americas, the first from the Southern Hemisphere, and the first pope from outside Europe since the Syrian Gregory III, who reigned in the 8th century. He is also the first Pope since Gregory XVI (1831–1846) to have been a priest of a religious order.

Born in Buenos Aires, Argentina, Bergoglio was ordained a Catholic priest in 1969, and from 1973 to 1979 was Argentina’s provincial superior of the Society of Jesus (Jesuits). He became the archbishop of Buenos Aires in 1998 and was created a cardinal in 2001 by Pope John Paul II. He led the Argentine Church during the December 2001 riots in Argentina. The administrations of Néstor Kirchner and Cristina Fernández de Kirchner considered him a political rival. Following the resignation of Pope Benedict XVI on 28 February 2013, a papal conclave elected Bergoglio as his successor on 13 March. He chose Francis as his papal name in honor of Saint Francis of Assisi.

Throughout his public life, Pope Francis has been noted for his humility, emphasis on God’s mercy, international visibility as pope, concern for the poor and commitment to interfaith dialogue. He is credited with having a less formal approach to the papacy than his predecessors, for instance choosing to reside in the Domus Sanctae Marthae guesthouse rather than in the papal apartments of the Apostolic Palace used by previous popes. He maintains that the Church should be more open and welcoming. He does not support unbridled capitalism, Marxism, or Marxist versions of liberation theology. Francis maintains the traditional views of the Church regarding abortion, marriage, ordination of women, and clerical celibacy. He opposes consumerism and overdevelopment, and supports taking action on climate change, a focus of his papacy with the promulgation of Laudato si’. In international diplomacy, he helped to temporarily restore full diplomatic relations between the United States and Cuba and supported the cause of refugees during the European and Central American migrant crises. Since 2018, he has been a vocal opponent of neo-nationalism. Francis has faced increasingly open criticism, particularly from theological conservatives, on many questions, including the admission of civilly divorced and remarried Catholics to Communion with the publication of Amoris laetitia and on the question of the alleged cover-up of clergy sexual abuse, against which he promulgated Vos estis lux mundi.

Jorge Mario Bergoglio was born on 17 December 1936 in Flores, a neighborhood of Buenos Aires. He was the eldest of five children of Mario José Bergoglio (1908–1959) and Regina María Sívori (1911–1981). Mario Bergoglio was an Italian immigrant accountant born in Portacomaro (Province of Asti) in Italy’s Piedmont region. Regina Sívori was a housewife born in Buenos Aires to a family of northern Italian (Piedmontese-Genoese) origin. Mario José’s family left Italy in 1929 to escape the fascist rule of Benito Mussolini. According to María Elena Bergoglio (b. 7 February 1948), the Pope’s only living sibling, they did not emigrate for economic reasons. His other siblings were Alberto Horacio (17 July 1942 – 15 June 2010), Oscar Adrián (30 January 1938-deceased) and Marta Regina (24 August 1940 – 11 July 2007). Two great-nephews, Antonio and Joseph, died in a traffic collision. His niece, Cristina Bergoglio, is a painter based in Madrid, Spain.

In the sixth grade, Bergoglio attended Wilfrid Barón de los Santos Ángeles, a school of the Salesians of Don Bosco, in Ramos Mejía, Buenos Aires. He attended the technical secondary school Escuela Técnica Industrial N° 27 Hipólito Yrigoyen, named after a past President of Argentina, and graduated with a Chemical Technician’s Diploma (not a master’s degree in Chemistry, as some media outlets incorrectly reported). In that capacity, he spent several years working in the foods section of Hickethier-Bachmann Laboratory where his boss was Esther Ballestrino. Prior to working as a chemical technician, Bergoglio had also worked as a bar bouncer and as a janitor sweeping floors.

When he was 21 years old, he suffered from life-threatening pneumonia and three cysts. He had part of a lung excised shortly afterwards. Bergoglio has been a lifelong supporter of San Lorenzo de Almagro football club. Bergoglio is also a fan of the films of Tita Merello, neorealism, and tango dancing, with a fondness for the traditional music of Argentina and Uruguay known as the milonga.

Popular mainstream media frequently portray Pope Francis either as a progressive papal reformer or with liberal, moderate values. The Vatican has claimed that Western news outlets often seek to portray his message with a less-doctrinal tone of papacy, in hopes of extrapolating his words to convey a more merciful and tolerant message. In the news media, both faithful and non-believers often refer to a “honeymoon” phase in which the Pope has changed the tone on Catholic doctrines and supposedly initiated ecclesiastical reform in the Vatican. Media systems differ, too, not only in their coverage of Francis’s stances but also in how individual events are portrayed. His 2015 trip to Cuba is a prime example. During this trip, American-based AP and British-based Reuters highlighted the religious aspect of the pope’s journey while Prensa Latina, the official state media agency, depicted it as a diplomatic visit. American and British media were also more likely during this trip to show Francis interacting with regular Cubans compared to the official Cuban media, which showed Francis interacting with elites most often.

In December 2013, both Time and The Advocate magazines named the Pontiff as their “Person of the Year” in praise and hopes of reforming the Roman Curia while hoping to change the Catholic Church’s doctrine on various controversial issues. In addition, Esquire magazine named him as the “Best-dressed man” for 2013 for his simpler vestments often in tune with a modern simplistic design on sartorial fashion. Rolling Stone magazine followed in January 2014 by making the Pontiff their featured front cover. Fortune magazine also ranked Pope Francis as number one in their list of 50 greatest leaders. On 5 November 2014, he was ranked by Forbes as the fourth most powerful person in the world and was the only non-political figure in the top ranking. In December 2016, Francis yet made Forbes’s list of “The World’s Most Powerful People”, ranking fifth.

In March 2013, a new song was dedicated to Francis and released in Brazilian Portuguese, European Portuguese, and Italian, titled Come Puoi (“How You Can”). Also in March, Pablo Buera, the mayor of La Plata, Argentina, announced that the city had renamed a section of a street leading up to a local cathedral Papa Francisco. There are already efforts to name other streets after him, as well as a school where he studied as a child. A proposal to create a commemorative coin as a tribute to Pope Francis was made in Argentina’s lower house on 28 November 2013. On the coins it would read, “Tribute from the Argentine People to Pope Francis.” beneath his face. As of May 2013, sales of papal souvenirs, a sign of popularity, were up.

Pope Francis presided over his first joint public wedding ceremony in a Nuptial Mass for 20 couples from the Archdiocese of Rome on 14 September 2014, just a few weeks before the start of 5–19 October Extraordinary Synod of Bishops on the Family.

On 19 March 2016, Pope Francis became the first Pope to create an Instagram account. He broke records after having gained over one million followers in under twelve hours of the account being up.