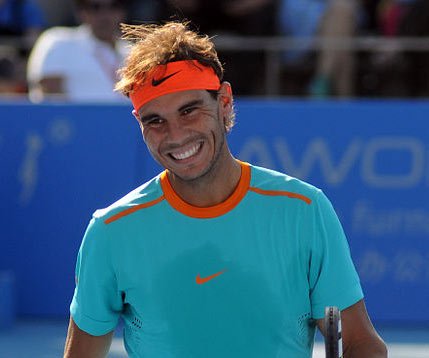 Nadal has won 19 Grand Slam singles titles, the second-most in history for a male player, as well as a record 35 ATP Tour Masters 1000 titles, 21 ATP Tour 500 titles and the 2008 Olympic gold medal in singles. In addition, Nadal has held the world No. 1 ranking for a total of 209 weeks, including being the year-end No. 1 five times. In majors, Nadal has won a record twelve French Open titles, four US Open titles, two Wimbledon titles and one Australian Open title, and won at least one Grand Slam every year for a record ten consecutive years (2005–2014). Nadal has won 85 career titles overall, including the most outdoor titles in the Open Era (83) and a record 59 titles on clay. With 81 consecutive wins on clay, Nadal holds the record for the longest single-surface win streak in the Open Era.

Nadal has been involved in five Davis Cup titles with Spain, and currently has a 29-win streak and 29–1 record in singles matches at the event. In 2010, at the age of 24, he became the seventh male player and the youngest of five in the Open Era to achieve the singles Career Grand Slam. Nadal is the second male player after Andre Agassi to complete the singles Career Golden Slam, as well as the second male player after Mats Wilander to have won at least two Grand Slams on all three surfaces (grass, hard court and clay). He has received the tour Sportsmanship Award three times and has been named the ATP Player of the Year five times and the ITF World Champion four times. In 2011, Nadal was named the Laureus World Sportsman of the Year.

Rafael Nadal was born in Manacor, a town on the island of Mallorca in the Balearic Islands, Spain, to parents Ana María Parera Femenías and Sebastián Nadal Homar. His father is a businessman, owner of an insurance company, glass and window company Vidres Mallorca, and the restaurant, Sa Punta. Rafael has a younger sister, María Isabel. His uncle, Miguel Ángel Nadal, is a retired professional footballer, who played for RCD Mallorca, FC Barcelona, and the Spanish national team. He idolized Barcelona striker Ronaldo as a child, and via his uncle got access to the Barcelona dressing room to have a photo with the Brazilian. Recognizing in Rafael a natural talent, another uncle, Toni Nadal, a tennis coach, introduced him to the game when he was three years old.

At age 8, Nadal won an under-12 regional tennis championship at a time when he was also a promising football player. This made Toni Nadal intensify training, and it was at that time that his uncle encouraged Nadal to play left-handed for a natural advantage on the tennis court, after studying Nadal’s then two-handed forehand stroke.

At age 12, Nadal won the Spanish and European tennis titles in his age group, while also playing football. Nadal’s father made him choose between football and tennis so that his school work would not deteriorate entirely. Nadal said: “I chose tennis. Football had to stop straight away.”

When he was 14, the Spanish tennis federation requested that Nadal leave Mallorca and move to Barcelona to continue his tennis training. His family turned down this request, partly because they feared his education would suffer, but also because Toni said that “I don’t want to believe that you have to go to America, or other places to be a good athlete. You can do it from your home.” The decision to stay home meant less financial support from the federation; instead, Nadal’s father covered the costs. In May 2001, he defeated former Grand Slam tournament champion Pat Cash in a clay-court exhibition match.

Nadal stands alone in the Open Era as the player with the most clay court titles (59), and holds an all-time record of 12 French Opens, 11 Monte-Carlo Masters and 11 Barcelona titles. He also stands alone with the longest single surface win streak in matches (clay courts, 81) and in sets (clay courts, 50) in the history of the Open Era. Due to these achievements, many have called Nadal “The King of Clay”, and he is widely regarded as the greatest clay-court player in history. Nadal’s records and evolution into an all-court champion have established him as one of the greatest players in tennis history, with some former tennis players and analysts considering him to be the greatest tennis player of all time.

The former tennis player Andre Agassi picked Nadal as the greatest of all time because of the way the Spaniard “had to deal with Federer, Djokovic, Murray in the golden age of tennis”. Nadal leads the head-to-head record in Grand Slams against all members of the Big Three and he has highest number of Slams won beating a Big Three member en route (13).

Nadal lived with his parents and younger sister María Isabel in a five-story apartment building in their hometown of Manacor, Mallorca. In June 2009, Spanish newspaper La Vanguardia, and then The New York Times, reported that his parents, Ana María and Sebastián, had separated. This news came after weeks of speculation in Internet posts and message boards over Nadal’s personal issues as the cause of his setback.

Nadal is an agnostic atheist. As a young boy, he would run home from school to watch Goku in his favorite Japanese anime, Dragon Ball. CNN released an article about Nadal’s childhood inspiration, and called him “the Dragon Ball of tennis” owing to his unorthodox style “from another planet”.

In addition to tennis and football, Nadal enjoys playing golf and poker. In April 2014 he played the world’s No. 1 female poker player, Vanessa Selbst, in a poker game in Monaco. Nadal’s autobiography, Rafa (Hyperion, 2012, ISBN 1-4013-1092-3), written with assistance from John Carlin, was published in August 2011. Nadal has been in a relationship with María Francisca (Mery) Perelló Pascual (often mistakenly referred to as Xisca in the press) since 2005, and their engagement was reported in January 2019. The couple married in October 2019.