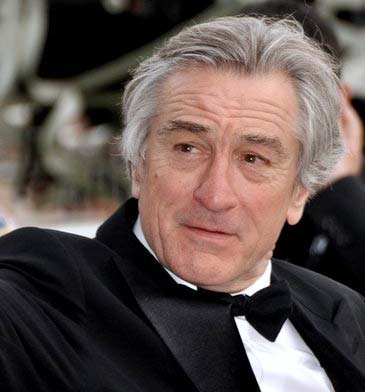 Robert Anthony De Niro Jr. (/də ˈnɪəroʊ/, Italian: [de ˈniːro]; born August 17, 1943) is an American actor, producer, and director. He is particularly known for his work in crime films, thrillers and collaborations with filmmaker Martin Scorsese. De Niro is the recipient of various accolades, including two Academy Awards, a Golden Globe Award, the Cecil B. DeMille Award, and a Screen Actors Guild Life Achievement Award. In 2009, he received the Kennedy Center Honor. In 2016, he received a Presidential Medal of Freedom from President Barack Obama.

Born in Manhattan in New York City, De Niro studied acting at HB Studio, Stella Adler Conservatory, and Lee Strasberg’s Actors Studio. His first major onscreen appearance was in Greetings (1968). He soon gained recognition with his role as a Major League Baseball player in the sports drama Bang the Drum Slowly (1973). His first collaboration with Scorsese was in Mean Streets (1973), in which he played the small-time criminal “Johnny Boy”. Stardom followed soon after with his role as the young Vito Corleone in Francis Ford Coppola’s The Godfather Part II (1974), which won him the Academy Award for Best Supporting Actor. For his portrayal of Travis Bickle in Taxi Driver (1976), and a soldier in the Vietnam War drama The Deer Hunter, both roles earned him an Academy Award nomination for Best Actor.

In 1980, De Niro portrayed Jake LaMotta in Scorsese’s biographical drama Raging Bull which won him a second Academy Award, for Best Actor. He diversified into comic roles, such as by playing a stand-up comedian in The King of Comedy (1982), and gained further recognition for his performances in Sergio Leone’s crime epic Once Upon a Time in America (1984), science fiction dystopian satire Brazil (1985), the religious epic The Mission (1986), and the comedy Midnight Run (1988). De Niro entered the 1990s playing gangster Jimmy Conway in the crime film Goodfellas (1990), a catatonic patient in the drama Awakenings (1990), and as a criminal in the psychological thriller Cape Fear (1991). All three films received praise for De Niro’s performances. He then starred in This Boy’s Life (1993), and made his directorial debut in 1993 with A Bronx Tale. His other critical successes include the crime films Heat (1995) and Casino (1995).

He played more comic roles in the films Wag the Dog (1997), Analyze This (1999), and Meet the Parents (2000). After appearing in a series of critically panned and commercially unsuccessful films, he earned another Academy Award nomination for his role in David O. Russell’s romantic comedy, Silver Linings Playbook (2012). In 2019, De Niro starred in two acclaimed films; the thriller Joker (2019), and Scorsese’s crime epic The Irishman (2019). De Niro and Scorsese have made nine feature films together, and six of De Niro’s films have been inducted into the United States National Film Registry by the Library of Congress as being “culturally, historically, or aesthetically significant”. In 1989, De Niro and partner Jane Rosenthal, co-founded TriBeCa Productions, a film production company, and in 2002, he co-founded the Tribeca Film Festival.