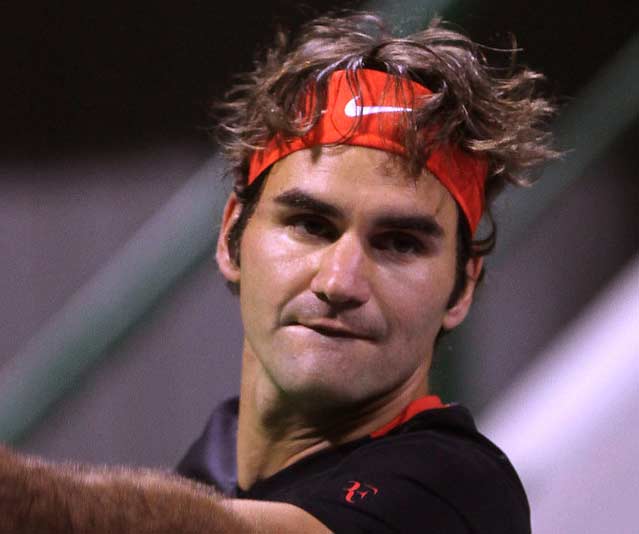 Roger Federer (born 8 August 1981) is a Swiss professional tennis player who is ranked world No. 4 in men’s singles tennis by the Association of Tennis Professionals (ATP). He has won 20 Grand Slam singles titles—the most in history for a male player—and has held the world No. 1 spot in the ATP rankings for a record total of 310 weeks (including a record 237 consecutive weeks) and was the year-end No. 1 five times, including four consecutive. Federer, who turned professional in 1998, was continuously ranked in the top 10 from October 2002 to November 2016.

Federer has won a record eight Wimbledon men’s singles titles, six Australian Open titles, five US Open titles (all consecutive, a record), and one French Open title. He is one of eight men to have achieved a Career Grand Slam. Federer has reached a record 31 men’s singles Grand Slam finals, including 10 consecutively from the 2005 Wimbledon Championships to the 2007 US Open. Federer has also won a record six ATP Finals titles, 28 ATP Tour Masters 1000 titles, and a record 24 ATP Tour 500 titles. Federer was a member of Switzerland’s winning Davis Cup team in 2014. He is also the only player after Jimmy Connors to have won 100 or more career singles titles, as well as to amass 1,200 wins in the Open Era.

Federer’s all-court game and versatile style of play involve exceptional footwork and shot-making. Effective both as a baseliner and a volleyer, his apparent effortlessness and efficient movement on the court have made Federer highly popular among tennis fans. He has received the tour Sportsmanship Award 13 times and been named the ATP Player of the Year and ITF World Champion five times. He has won the Laureus World Sportsman of the Year award a record five times, including four consecutive awards from 2005 to 2008. He is also the only person to have won the BBC Overseas Sports Personality of the Year award four times.

Childhood and early life
Federer was born in Basel, Switzerland. His father, Robert Federer, is a Swiss-German from Berneck in the Canton of St. Gallen, and his mother, Lynette Federer (née Durand), is an Afrikaner from Kempton Park, Gauteng, in South Africa. Federer has one sibling, his older sister, Diana, who is the mother of a set of twins. Since his mother is South African, he holds both Swiss and South African citizenship. He grew up in nearby Birsfelden, Riehen, and then Münchenstein, close to the French and German borders, and he speaks Swiss German, Standard German, English, and French fluently, as well as functional Italian and Swedish; Swiss German is his native language. Federer served as a ball boy at his hometown Basel tournament, the Swiss Indoors, in 1992 and 1993.

Federer’s signature
Like all male Swiss citizens, Federer was subject to compulsory military service in the Swiss Armed Forces. However, in 2003 he was ruled “unsuitable” and was subsequently not required to fulfill his military obligation. Instead, he served in the civil protection force and was required to pay 3% of his taxable income as an alternative. He grew up supporting FC Basel and the Swiss national football team. Federer also credits his hand-eye coordination to the wide range of sports he played as a child, including badminton and basketball.

Family
Federer is married to former Women’s Tennis Association player Miroslava Federer (née Vavrinec), whom he met while they were both competing for Switzerland at the 2000 Sydney Olympics. Usually called Mirka, she retired from the tour in 2002 because of a foot injury. They were married at Wenkenhof Villa in Riehen near Basel on 11 April 2009, surrounded by a small group of close friends and family. In 2009, Mirka gave birth to identical twin girls. The Federers had another pair of identical twins in 2014, this time boys.

Dominik Hrbaty described what it was like to play Federer in the Scoop Malinowski book Facing Federer: “Roger is different. He’s the new generation. He was comparable to Marcelo Rios, very talented, he has great hands, but the difference was Roger had the big serve, big return. He could make winners out of anything basically. And even out of defense. And Roger is just one of a kind.”

An elite athlete, Federer is an all-court, all-around player known for his speed, fluid style of play, and exceptional shot making. Federer mainly plays from the baseline but is also comfortable at the net, being one of the best volleyers in the game. He has a powerful, accurate smash and very effectively performs rare elements of professional tennis, such as the backhand smash and skyhook, half-volley, jump smash (slam dunk) and an aggressive serve return known affectionately as SABR (Sneak Attack By Roger, a half-volley attack on an opponent’s second serve). David Foster Wallace compared the brute force of Federer’s forehand motion with that of “a great liquid whip”, while John McEnroe has referred to Federer’s forehand as “the greatest shot in our sport.” Federer is also known for his efficient, deceptively effortless movement around the court and excellent footwork, which enables him to run around shots directed to his backhand, usually considered his weaker wing, and instead hit a powerful and penetrating inside-out or inside-in forehand, one of his best shots. He also has great variety with his forehand, able to hit with topspin or pace (or both), thus opening up the court and going in to the forecourt for aggressive volleys.

Federer plays with a single-handed backhand, which gives him great variety. He employs the slice, occasionally using it to lure his opponent to the net and deliver a passing shot. Federer can also fire topspin winners and possesses a ‘flick’ backhand with which he can generate pace with his wrist; this is usually used to pass the opponent at the net. He has averaged 90% of service games won throughout his career, oftentimes coming up victorious in clutch or pressure service games. His serve is difficult to read because he always uses a similar ball toss, regardless of what type of serve he is going to hit and where he aims to hit it, and turns his back to his opponents during his motion. He is often able to produce big serves on key points during a match. His first serve is typically around 200 km/h (125 mph); however, he is capable of serving at 220 km/h (137 mph). Federer is also accomplished at serve and volleying, and employed this tactic frequently in his early career.

Later in his career, Federer added the drop shot to his arsenal and can perform a well-disguised one off both wings. He sometimes uses a between-the-legs shot, which is colloquially referred to as a “tweener” or “hotdog”. His most notable use of the tweener was in the semifinals of the 2009 US Open against Novak Djokovic, bringing him triple match point. Federer is one of the top players who employ successfully the “squash shot”, when he gets pushed deep and wide on his forehand wing. Since Stefan Edberg joined his coaching team at the start of the 2014 season, Federer has played a more offensive game, attacking the net more often, and improved his volley shots. In the lead-up to the 2015 US Open, Federer successfully added a new unique shot to his arsenal called SABR (Sneak Attack by Roger), in which he charges forward to receive the second serve and hits a return on the service line. The SABR is a unique shot that Federer owns, in the way that he manages to add enough power and placement into the shot, which makes it very difficult, or close to impossible for the opponent to reach it. With the switch to a bigger 97 inch racket from 90 inches, Federer has gained easy power while relinquishing some control on his shots. The bigger racket has enabled easier serving and better defense on both wings with fewer shanks. However this has diminished control and power on his forehand, slice backhand and dropshot. Since his comeback in 2017, Federer is noted for his improved backhand both down the line and cross court which was cited as the reason for his win against Nadal in the 2017 Australian Open Final and Indian Wells 4th round.

Federer is also noted for his cool demeanour and emotional control on the court. In contrast to his early career, most of his professional game has been characterised by lack of outbursts or emotional frustration at errors, which gives him an advantage over less controlled opponents.