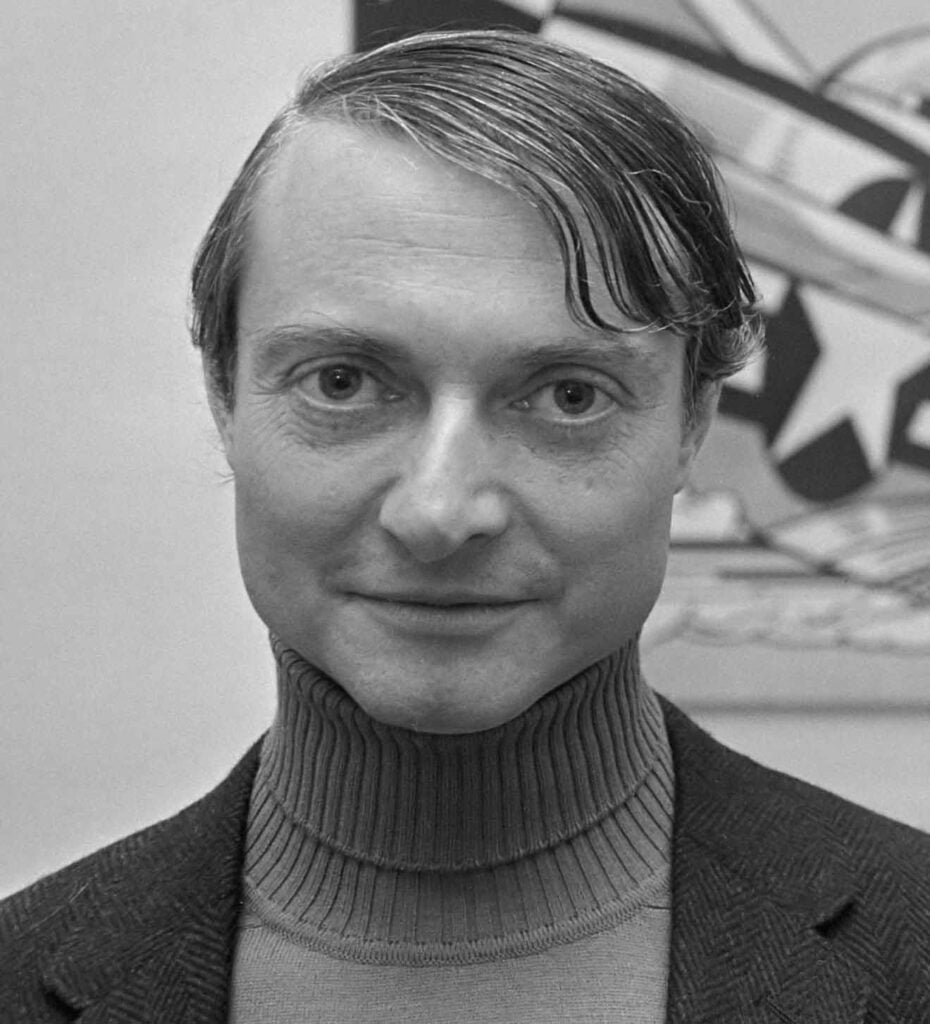 On view: of Modern Art

Roy Fox Lichtenstein (October 27, 1923 – September 29, 1997) was an American pop artist. During the 1960s, along with Andy Warhol, Jasper Johns, and James Rosenquist among others, he became a leading figure in the new art movement. His work defined the premise of pop art through parody. Inspired by the comic strip, Lichtenstein produced precise compositions that documented while they parodied, often in a tongue-in-cheek manner. His work was influenced by popular advertising and the comic book style. He described pop art as “not ‘American’ painting but actually industrial painting”. His paintings were exhibited at the Leo Castelli Gallery in New York City.

Whaam! and Drowning Girl are generally regarded as Lichtenstein’s most famous works. Drowning Girl, Whaam! and Look Mickey are regarded as his most influential works. His most expensive piece is Masterpiece, which was sold for $165 million in January 2017.

Lichtenstein was born in New York, into an upper-middle-class Jewish family. His father, Milton, was a real estate broker, his mother, Beatrice (Werner), a homemaker. He was raised on the Upper West Side and attended public school until the age of twelve. He then attended New York’s Dwight School, graduating from there in 1940. Lichtenstein first became interested in art and design as a hobby, through school. He was an avid jazz fan, often attending concerts at the Apollo Theater in Harlem. He frequently drew portraits of the musicians playing their instruments. In his last year of high school, 1939, Lichtenstein enrolled in summer classes at the Art Students League of New York, where he worked under the tutelage of Reginald Marsh.

Lichtenstein then left New York to study at Ohio State University, which offered studio courses and a degree in fine arts. His studies were interrupted by a three-year stint in the Army during and after World War II between 1943 and 1946. After being in training programs for languages, engineering, and pilot training, all of which were cancelled, he served as an orderly, draftsman, and artist.

Lichtenstein returned home to visit his dying father and was discharged from the Army with eligibility for the G.I. Bill. He returned to studies in Ohio under the supervision of one of his teachers, Hoyt L. Sherman, who is widely regarded to have had a significant impact on his future work (Lichtenstein would later name a new studio he funded at OSU as the Hoyt L. Sherman Studio Art Center).

Lichtenstein entered the graduate program at Ohio State and was hired as an art instructor, a post he held on and off for the next ten years. In 1949 Lichtenstein received a Master of Fine Arts degree from Ohio State University.

In 1951, Lichtenstein had his first solo exhibition at the Carlebach Gallery in New York. He moved to Cleveland in the same year, where he remained for six years, although he frequently traveled back to New York. During this time he undertook jobs as varied as a draftsman to a window decorator in between periods of painting. His work at this time fluctuated between Cubism and Expressionism. In 1954, his first son, David Hoyt Lichtenstein, now a songwriter, was born. His second son, Mitchell Lichtenstein, was born in 1956.

In 1957, he moved back to upstate New York and began teaching again. It was at this time that he adopted the Abstract Expressionism style, being a late convert to this style of painting. Lichtenstein began teaching in upstate New York at the State University of New York at Oswego in 1958. About this time, he began to incorporate hidden images of cartoon characters such as Mickey Mouse and Bugs Bunny into his abstract works.

Lichtenstein received numerous Honorary Doctorate degrees from, among others, the George Washington University (1996), Bard College, Royal College of Art (1993), Ohio State University (1987), Southampton College (1980), and the California Institute of the Arts (1977). He also served on the board of the Brooklyn Academy of Music.

In 1949, Lichtenstein married Isabel Wilson, who previously had been married to Ohio artist Michael Sarisky. However, the brutal upstate winters took a toll on Lichtenstein and his wife, after he began teaching at the State University of New York at Oswego in 1958. The couple sold the family home in Highland Park, New Jersey, in 1963 and divorced in 1965.

Lichtenstein married his second wife, Dorothy Herzka, in 1968. In 1966, they rented a house in Southampton, New York that Larry Rivers had bought around the corner from his own house. Three years later, they bought a 1910 carriage house facing the ocean on Gin Lane. From 1970 until his death, Lichtenstein split his time between Manhattan and Southampton. He also had a home on Captiva Island.

Lichtenstein died of pneumonia on September 29, 1997 at New York University Medical Center, where he had been hospitalized for several weeks, four weeks before his 74th birthday. He was survived by his second wife, Dorothy Herzka, and by his sons, David and Mitchell, from his first marriage.