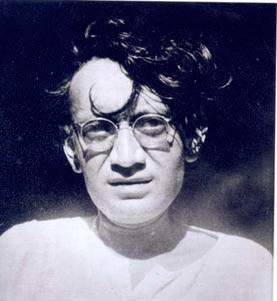 Saadat Hasan Manto (Urdu: سعادت حسن منٹو‎,11 May 1912 – 18 January 1955) was a colonial Indian and Pakistani writer, playwright and author born in Ludhiana, India. Writing mainly in the Urdu language, he produced 22 collections of short stories, a novel, five series of radio plays, three collections of essays and two collections of personal sketches. His best short stories are held in high esteem by writers and critics. Manto was known to write about the hard truths of society that no one dared to talk about. He is best known for his stories about the partition of India, which he opposed, immediately following independence in 1947.

Manto was tried for obscenity six times; thrice before 1947 in British India, and thrice after independence in 1947 in Pakistan, but was never convicted. He is acknowledged as one of the finest 20th century Urdu writers and is the subject of two biographical films: Manto, directed by Sarmad Khoosat and the 2018 film Manto, directed by Nandita Das.

Saadat Hassan Manto was born in Paproudi village of Samrala, in the Ludhiana district of the Punjab in a Muslim family of barristers on 11 May 1912. His father was a judge of a local court. He was ethnically a Kashmiri and proud of his Kashmiri roots. In a letter to Pandit Nehru he suggested that being ‘beautiful’ was the second meaning of being ‘Kashmiri’.

The big turning point in his life came in 1933, at age 21, when he met Abdul Bari Alig, a scholar and polemic writer who encouraged him to find his true talents and read Russian and French authors.

Within a matter of months, Manto produced an Urdu translation of Victor Hugo’s The Last Day of a Condemned Man, which was published by Urdu Book Stall, Lahore as Sarguzasht-e-Aseer (A Prisoner’s Story). Soon afterwards he joined the editorial staff of Masawat, a daily paper published in Ludhiana.

This heightened enthusiasm pushed Manto to pursue graduation at Aligarh Muslim University, which he joined in February 1934, and soon got associated with Indian Progressive Writers’ Association (IPWA). It was here that he met writer Ali Sardar Jafri and found a new spurt in his writing. His second story, “Inqlaab Pasand”, was published in Aligarh magazine in March 1935.

In 1934, Saadat Hasan Manto first came to Bombay (now Mumbai) and started to write for magazines, newspapers and writing scripts for the Hindi film industry. During this time, he became good friends with Noor Jehan, Naushad, Ismat Chughtai, Shyam and Ashok Kumar. During this time, he lived in Foras Road, in the center of Bombay’s red light area of Kamathipura. What he saw then around him had a profound impact on his writings. Subsequently Manto had also accepted the job of writing for Urdu Service of All India Radio in 1941. This proved to be his most productive period as in the next eighteen months he published over four collections of radio plays, Aao (Come), Manto ke Drame (Manto’s Dramas), Janaze (Funerals) and Teen Auraten (Three women). He continued to write short stories and his next short story collection Dhuan (Smoke) was soon out followed by Manto ke Afsane and his first collection of topical essays, Manto ke Mazamin. This period culminated with the publication of his mixed collection Afsane aur Dramey in 1943. Meanwhile, due to a quarrel with the director of All India Radio, poet N. M. Rashid, he left his job and returned to Bombay in July 1942 and again started working with film industry. He entered his best phase in screenwriting giving films like Aatth Din, Shikari, Chal Chal Re Naujawan and Mirza Ghalib, which was finally released in 1954. Some of his short stories also came from this phase including Kaali Shalwar (1941), Dhuan (1941) and Bu (1945), which was published in Qaumi Jang (Bombay) in February 1945. Another highlight of his second phase in Bombay was the publication of a collection of his stories, Chugad, which also included the story ‘Babu Gopinath’. He stayed in Bombay until he moved to Pakistan in January 1948 after the partition of India in 1947.

As a resident of Bombay, Manto had intended to stay in India after partition.[22] In 1948, his wife and children went to Lahore to visit their relatives and friends. During this time, as stories of the atrocities of partition riots reached him, in the midst of occasional communal riots in Mumbai itself, he decided to migrate to Pakistan, and left for it by ship. Manto and his family thus found themselves as “muhajirs” (refugees from India) and were among the millions of Muslims who left present-day India for the new Muslim-majority nation of Pakistan.

When Manto arrived in Lahore from Bombay, he associated with several intellectuals at Lahore’s Pak Tea House. According to one commentator: “There was absolutely no external influence and people would share their opinions on any subject without fear even during the military dictators’ regimes.” In Lahore, Manto lived with his wife and family in a room in Lakshmi mansion, located near Butt Tikka. The three storied building was built by Lala Lajpat Rai’s Lakshmi insurance company in 1938, inaugurated by Sarojini Naidu, and was at one time the residence of K.Santhanam, an eminent lawyer and the family of a jeweler called Girdharilal. However, it was abandoned during the partition riots of 1947-48. The mansion is currently dilapidated and uninhabited, though its façade still exists, renovated and painted.

In his later years, Manto had become increasingly alcoholic, which eventually led to cirrhosis of the liver. He died on 18 January 1955, in an apartment located off Hall Road in Lahore. His death was attributed to the effects of alcoholism. He was survived by his wife Safia and daughters Nighat, Nuzhat and Nusrat. His daughter Nighat Bashir Patel still lives in the vicinity of the house where Manto lived.

Manto was a writer whose life story became a subject of intense discussion and introspection. During the last two decades, many stage productions were done to present his character in conflict with the harsh socio-economic realities of the post-partition era. Danish Iqbal’s stage Play Ek Kutte Ki Kahani presented Manto in a new perspective on occasion of his birth centenary.

On 18 January 2005, the fiftieth anniversary of his death, Manto was commemorated on a Pakistani postage stamp. On 14 August 2012 which is Pakistan’s Independence Day, Saadat Hasan Manto was posthumously awarded the Nishan-e-Imtiaz award (Distinguished Service to Pakistan Award) by the Government of Pakistan.

In 2015, Pakistani actor and director Sarmad Khoosat made and released a movie, Manto, based on the life of Manto. In 2018, the British Broadcasting Corporation named the work Toba Tek Singh among the 100 stories that shaped the world, alongside works by authors like Homer and Virginia Woolf.

The 2018 film Manto, made by Nandita Das and starring Nawazuddin Siddiqui, is a Bollywood film based on the life of Manto.