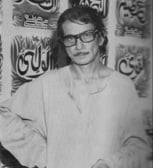 Syed Sadequain Ahmed Naqvi (Urdu: سیّد صادِقَین احمد نقوی ‎), Tamgha-e-Imtiaz, Pride of Performance, Sitara-e-Imtiaz, also often referred to as Sadequain Naqqash, was a Pakistani artist, best known for his skills as a calligrapher and a painter. He is considered as one of the finest painters and calligraphers Pakistan has ever produced. He was also a poet, writing hundreds of rubāʿiyāt in the style of Omar Khayyam and Sarmad Kashani.

Sadequain was born on June 30, 1923 in Amroha, into a family of calligraphers. In late 1940s he joined the Progressive Writers and Artists Movement. His true talent was discovered by Huseyn Shaheed Suhrawardy who brought Sadequain into the limelight. He also spent some time in Paris augmenting his skills.

adequain was widely praised for his calligraphic style, which is considered iconic by many critics of South Asian art.

Sadequain was part of a broader Islamic art movement that emerged independently across North Africa and parts of Asia in the 1950s and known as the Hurufiyya movement. Hurufiyah refers to the attempt by artists to combine traditional art forms, notably calligraphy as a graphic element within a contemporary artwork. Hurufiyah artists rejected Western art concepts, and instead searched for a new visual languages that reflected their own culture and heritage. These artists successfully transformed calligraphy into a modern aesthetic, which was both contemporary and indigenous. Prior to Sadeqain’s work, only a few painters had experimented with the medium in Pakistan. Sadequain is a pioneer of the style, bringing calligraphy into a mainstream art form, and influencing subsequent generations of Pakistani artists.

Salahi carried the script with a flourish in all directions, giving it the ‘power of space, vigor and volume’.

Sadequain painted classical literature from the poetic verses of Ghalib, Iqbal and Faiz. He belonged to the school of thought which enriched realism with lyricism. His work was essentially linear. He also illustrated French Nobel Prize–winning writer Albert Camus, Ghalib, Iqbal, and Faiz. Thousand of the drawings he executed, were given away to his admirers. He wrote and published hundreds of quartets.

Sadequain was the most prolific painter in the period following the independence of Pakistan in 1947. He was constantly at work and he worked on large scale. He repeatedly stated that he was not interested in decorating drawing rooms of rich and powerful. He worked on large murals for public buildings, symbolic of the collective labour of humanity, and his work was mostly donated to the public.

Sadequain in his own words was primarily a painter of figures with allegorical significance.