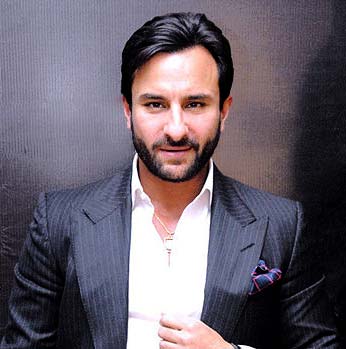 Saif Ali Khan (pronounced [ˈsɛːf əˈli ˈxaːn]; born Sajid Ali Khan on 16 August 1970) is an Indian film actor and producer. The son of actress Sharmila Tagore and cricketer Mansoor Ali Khan Pataudi, Khan made his acting debut in Yash Chopra’s drama Parampara (1993), but achieved success with his roles in the romantic drama Yeh Dillagi and the action film Main Khiladi Tu Anari (both 1994). Khan’s career prospect declined through much of the 1990s, and his biggest commercial success of the decade came with the ensemble drama Hum Saath-Saath Hain (1999). He rose to prominence with roles in two ensemble comedy-dramas—Dil Chahta Hai (2001) and Kal Ho Naa Ho (2003).

The 2004 romantic comedy Hum Tum proved to be Khan’s first success in which he played the sole male lead, earning him the National Film Award for Best Actor, and starring roles in the drama Parineeta and the romantic comedy Salaam Namaste (both 2005) established him as a leading actor in Bollywood. He earned wide critical praise for his portrayal of a manipulative businessman in the 2004 thriller Ek Hasina Thi, an apprentice in the 2006 English film Being Cyrus, a character based on William Shakespeare’s antagonist Iago in the 2006 crime film Omkara, and a terrorist in the 2009 thriller Kurbaan. Khan’s greatest commercial success came with the 2008 thriller Race and its 2013 sequel, the 2009 romance Love Aaj Kal, and the 2012 romantic comedy Cocktail. He followed it by starring in a series of films that under-performed at the box office, but received praise for playing a troubled policeman in the Netflix thriller series Sacred Games and a Rajput fort keeper in the historical drama Tanhaji (2020). The latter emerged as his highest-grossing release.

Khan is the recipient of several accolades, including a National Film Award and six Filmfare Awards, and received Padma Shri, the fourth highest Indian civilian award, in 2010. He has been noted for his performances in a range of film genres—from crime dramas to thrillers and occasional romances—and his film roles have been credited with contributing to a change in the concept of a Hindi film hero. Khan was married to his first wife, Amrita Singh, for thirteen years, after which he married the actress Kareena Kapoor. He has three children—two with Singh and one with Kapoor. In addition to film acting, Khan is a frequent television presenter, stage show performer, and the owner of the production companies Illuminati Films and Black Knight Films.

Khan was born on 16 August 1970 in New Delhi, India to Mansoor Ali Khan Pataudi, a former captain of the Indian national cricket team, and his wife Sharmila Tagore, a film actress. From 1952–71, Pataudi held the title of Nawab of Pataudi, but following his death a pagri ceremony was held in the village of Pataudi, Haryana to crown Khan as the tenth Nawab of Pataudi. Khan has two younger sisters, Saba and actress Soha Ali Khan, and is the paternal grandson of Iftikhar Ali Khan Pataudi who played for the Indian cricket team in England in 1946. Khan is of predominantly Bengali descent on his mother’s side, and on his father’s side he is of Pashtun descent.

Speaking about his childhood, Khan said that he was exposed to a “life beyond movies”, and his mother described him as someone who was “not an easy child He was impulsive [and] spontaneous.” As a child, he recalls fond memories of watching his father playing cricket in the garden, and has emphasised his father’s education and background as having a lasting impression on how family life was conducted. Khan studied at The Lawrence School, Sanawar in Himachal Pradesh and was later sent to Lockers Park School in Hertfordshire at the age of nine. He next enrolled at Winchester College and explained that “I did not take advantage of my tenure [there]. My classmates went on to Oxford and Cambridge, but I was not academically inclined. When I applied myself, which was not often, I stood first. I should have studied harder.”

After graduating from the boarding school, Khan returned to India and worked for an advertising firm in Delhi for two months. He later appeared in the television commercial for Gwalior Suiting on the insistence of a family friend, and was subsequently cast by director Anand Mahindroo. The project eventually got cancelled but Khan relocated to Mumbai to pursue a career in film; he recalls, “Finally I had some direction and focus. I remember […] feeling so excited that I could go to Mumbai, stay in my own place and enjoy the adventure of starting my own career.”