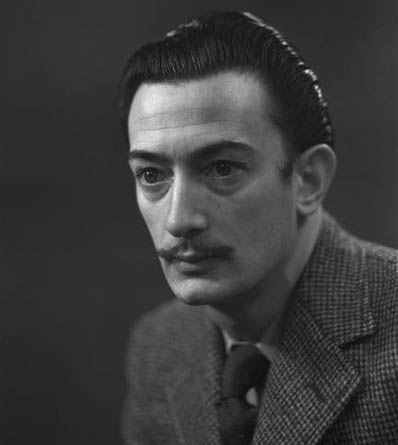 On view: The Museum of Modern Art, SCAD Museum of Art

Salvador Domingo Felipe Jacinto Dalí i Domènech, 1st Marquess of Dalí de Púbol (11 May 1904 – 23 January 1989) was a Spanish Surrealist artist renowned for his technical skill, precise draftsmanship and the striking and bizarre images in his work.

Born in Figueres, Catalonia, Dalí received his formal education in fine arts at Madrid. Influenced by Impressionism and the Renaissance masters from a young age, he became increasingly attracted to Cubism and avant-garde movements. He moved closer to Surrealism in the late 1920s and joined the Surrealist group in 1929, soon becoming one of its leading exponents. His best-known work, The Persistence of Memory, was completed in August 1931, and is one of the most famous Surrealist paintings. Dalí lived in France throughout the Spanish Civil War (1936 to 1939) before leaving for the United States in 1940 where he achieved commercial success. He returned to Spain in 1948 where he announced his return to the Catholic faith and developed his “nuclear mysticism” style, based on his interest in classicism, mysticism and recent scientific developments.

Dalí’s artistic repertoire included painting, graphic arts, film, sculpture, design and photography, at times in collaboration with other artists. He also wrote fiction, poetry, autobiography, essays and criticism. Major themes in his work include dreams, the subconscious, sexuality, religion, science and his closest personal relationships. To the dismay of those who held his work in high regard, and to the irritation of his critics, his eccentric and ostentatious public behavior sometimes drew more attention than his artwork. His public support for the Francoist regime, his commercial activities and the quality and authenticity of some of his late works have also been controversial. His life and work were an important influence on other Surrealists, pop art and contemporary artists such as Jeff Koons and Damien Hirst. There are two major museums devoted to his work: The Dalí Theatre-Museum in Figueres, Spain and the Salvador Dalí Museum in Florida.

Salvador Dalí was born on 11 May 1904, at 8:45 am, on the first floor of Carrer Monturiol, 20 in the town of Figueres, in the Empordà region, close to the French border in Catalonia, Spain. Dalí’s older brother, who had also been named Salvador (born 12 October 1901), had died of gastroenteritis nine months earlier, on 1 August 1903. His father, Salvador Rafael Aniceto Dalí Cusí (1872–1950) was a middle-class lawyer and notary, an anti-clerical atheist and Catalan federalist, whose strict disciplinary approach was tempered by his wife, Felipa Domènech Ferrés (1874–1921), who encouraged her son’s artistic endeavors. In the summer of 1912, the family moved to the top floor of Carrer Monturiol 24 (presently 10). Dalí later attributed his “love of everything that is gilded and excessive, my passion for luxury and my love of oriental clothes” to an “Arab lineage”, claiming that his ancestors were descendants of the Moors.

Dalí was haunted by the idea of his dead brother throughout his life, mythologizing him in his writings and art. Dalí said of him, “[we] resembled each other like two drops of water, but we had different reflections.” He “was probably a first version of myself but conceived too much in the absolute”. Images of his brother would reappear in his later works, including Portrait of My Dead Brother (1963).

Dalí also had a sister, Anna Maria, who was three years younger. In 1949, she published a book about her brother, Dalí as Seen by His Sister.

His childhood friends included future FC Barcelona footballers Sagibarba and Josep Samitier. During holidays at the Catalan resort of Cadaqués, the trio played football together.

Dalí attended the Municipal Drawing School at Figueres from 1916 and also discovered modern painting on a summer vacation trip to Cadaqués with the family of Ramon Pichot, a local artist who made regular trips to Paris. The next year, Dalí’s father organized an exhibition of his charcoal drawings in their family home. He had his first public exhibition at the Municipal Theatre in Figueres in 1918, a site he would return to decades later. In early 1921 the Pichot family introduced Dalí to Futurism and Dalí’s uncle Anselm Domenech, who owned a bookshop in Barcelona, supplied him with books and magazines on Cubism and contemporary art.

On 6 February 1921, Dalí’s mother died of uterine cancer. Dalí was 16 years old and later said his mother’s death “was the greatest blow I had experienced in my life. I worshipped her… I could not resign myself to the loss of a being on whom I counted to make invisible the unavoidable blemishes of my soul.” After his wife’s death, Dalí’s father married her sister. Dalí did not resent this marriage, because he had great love and respect for his aunt.