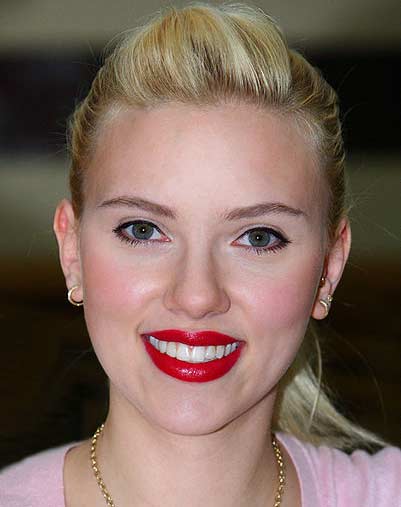 Scarlett Ingrid Johansson (born November 22, 1984) is an American actress and singer. The world’s highest-paid actress since 2018, she has made multiple appearances in the Forbes Celebrity 100. Her films have grossed over $14.3 billion worldwide, making Johansson the ninth-highest-grossing box office star of all time. She is the recipient of numerous accolades, including a Tony Award and a BAFTA Award, as well as nominations for two Academy Awards and five Golden Globe Awards.

Born and raised in Manhattan, New York City, Johansson aspired to be an actress from a young age and first appeared on stage in an Off-Broadway play as a child. She made her film debut in the fantasy comedy North (1994), and gained early recognition for her roles in Manny & Lo (1996), The Horse Whisperer (1998), and Ghost World (2001). Johansson shifted to adult roles in 2003 with her performances in Lost in Translation, which won her a BAFTA Award for Best Actress, and Girl with a Pearl Earring. She was nominated for Golden Globe Awards for these films, and for playing an estranged teenager in the drama A Love Song for Bobby Long (2004), and a seductress in the psychological thriller Match Point (2005). Other works during this period include The Prestige (2006) and Vicky Cristina Barcelona (2008); and the albums Anywhere I Lay My Head (2008) and Break Up (2009), which both charted on the Billboard 200.

In 2010, Johansson debuted on Broadway in a revival of A View from the Bridge, which won her a Tony Award for Best Featured Actress, and began playing the role of Black Widow in the Marvel Cinematic Universe with Iron Man 2. Johansson went on to star in the science fiction films Her (2013), Under the Skin (2013), Lucy (2014), and Ghost in the Shell (2017). She received critical praise and nominations for two Academy Awards for playing a single mother in Nazi Germany in the satire Jojo Rabbit and an actress going through a divorce in the drama Marriage Story (both 2019).

As a public figure, Johansson is a prominent brand endorser and supports various charities. She has been cited as a Hollywood sex symbol by various media outlets. She was married to Canadian actor Ryan Reynolds from 2008 to 2011, and to French businessman Romain Dauriac, with whom she has a child, from 2014 to 2017.

Scarlett Ingrid Johansson was born in the New York City borough of Manhattan, on November 22, 1984. Her father, Karsten Olaf Johansson, is an architect originally from Copenhagen, Denmark, and her paternal grandfather, Ejner Johansson, was an art historian, screenwriter and film director, whose father was Swedish. Scarlett’s mother, Melanie Sloan, a New Yorker, has worked as a producer. She comes from an Ashkenazi Jewish family from Poland and Russia, originally surnamed Schlamberg, and Scarlett has described herself as Jewish. She has an older sister, Vanessa, also an actress; an older brother, Adrian; and a twin brother, Hunter. Johansson also has an older half-brother, Christian, from her father’s first marriage. She holds both American and Danish citizenship.

Johansson attended PS 41, an elementary school in Greenwich Village, Manhattan. Her parents divorced when she was 13. Johansson was particularly close to her maternal grandmother, Dorothy Sloan, a bookkeeper and schoolteacher; they often spent time together and Johansson considered Sloan her best friend. Interested in a career in the spotlight from an early age, she often put on song-and-dance routines for her family. She was particularly fond of musical theater and jazz hands. She took lessons in tap dance, and states that her parents were supportive of her career choice. She describes her childhood as very ordinary.

As a child, Johansson practiced acting by staring in the mirror until she made herself cry, wanting to be Judy Garland in Meet Me in St. Louis. At age seven, she was devastated when a talent agent signed one of her brothers instead of her, but she later decided to become an actress anyway. She enrolled at the Lee Strasberg Theatre Institute, and began auditioning for commercials, but soon lost interest: “I didn’t want to promote Wonder Bread.” She shifted her focus to film and theater, making her first stage appearance in the Off-Broadway play Sophistry with Ethan Hawke, in which she had two lines. Around this time, she began studying at Professional Children’s School (PCS), a private educational institution for aspiring child actors in Manhattan. At age nine, Johansson made her film debut as John Ritter’s daughter in the fantasy comedy North (1994). She says that when she was on the film set, she knew intuitively what to do. Johansson later played minor roles including as the daughter of Sean Connery and Kate Capshaw’s characters in the mystery thriller Just Cause (1995), and an art student in If Lucy Fell (1996).

While attending PCS, Johansson dated classmate Jack Antonoff from 2001 to 2002. She dated her Black Dahlia co-star Josh Hartnett for about two years until the end of 2006; Hartnett said they split because their busy schedules kept them apart. Johansson began a relationship with Canadian actor Ryan Reynolds in 2007; they became engaged in May 2008, married in September 2008, separated in December 2010 and divorced in July 2011.

In November 2012, Johansson started dating Frenchman Romain Dauriac, the owner of an advertising agency; they became engaged the following September. The couple divided their time between New York City and Paris. In 2014, she gave birth to their daughter, Rose Dorothy Dauriac. Johansson and Dauriac married that October in Philipsburg, Montana. They separated in mid-2016 and divorced in September 2017. It was announced in December 2017 that Johansson had begun a relationship with Saturday Night Live co-head writer and Weekend Update co-host Colin Jost. In May 2019, Johansson and Jost were engaged.

Johansson has criticized the media for promoting an image that causes unhealthy diets and eating disorders among women. In one article she wrote for HuffPost, she encouraged people to maintain a healthy body. She appeared nude on the cover of the March 2006 issue of Vanity Fair alongside actress Keira Knightley and fully clothed fashion designer Tom Ford. This caused some controversy, as some believed the photo demonstrated that women are forced to flaunt their sexuality more often than men. In September 2011, nude photographs of Johansson hacked from her cell phone were published online. Following an FBI investigation, the hacker was arrested, pleaded guilty, and was sentenced to 10 years in prison. Johansson said the photos had been sent to her then-husband, Reynolds, three years before the incident. In 2014, Johansson won a lawsuit against French publisher JC Lattès for defamatory statements about her relationships in the novel The First Thing We Look At by Grégoire Delacourt. Johansson was awarded $3,400; she had claimed $68,000.