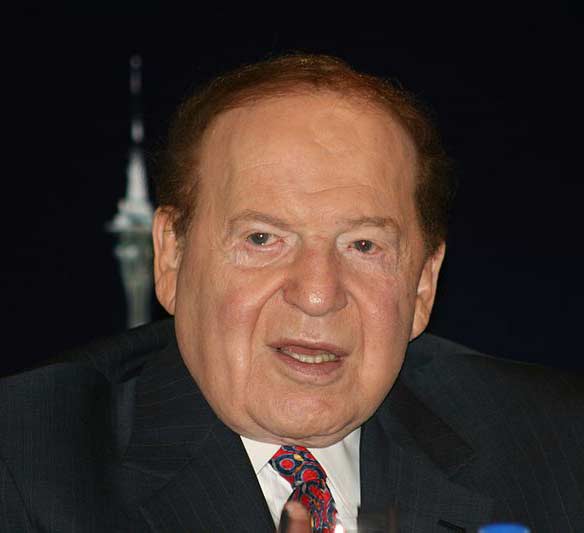 Net Worth: Founder, Chairman, and CEO of Las Vegas Sands

Sheldon Gary Adelson (born August 4, 1933) is an American business magnate, investor, philanthropist and political donor. He is the founder, chairman and chief executive officer of Las Vegas Sands Corporation, which owns the Marina Bay Sands in Singapore, and the parent company of Venetian Macao Limited, which operates The Venetian Resort Hotel Casino and the Sands Expo and Convention Center. He owns the Israeli daily newspaper Israel Hayom, Makor Rishon and the American daily newspaper Las Vegas Review-Journal.Adelson, a philanthropist and donor to a variety of causes, created the Adelson Foundation in 2007 at the behest of his wife, Miriam. He is a member of the Republican Party, and made the largest single donation to any U.S. presidential inauguration when he gave the Trump inaugural committee US$5 million.

Sheldon Gary Adelson was born in 1933 into a low-income family, and grew up in the Dorchester neighborhood of Boston, the son of Sarah (née Tonkin) and Arthur Adelson. His father’s family was of Ukrainian Jewish and Lithuanian Jewish ancestry. His mother immigrated from England, and one of Sheldon Adelson’s grandfathers was a Welsh coal miner. His father drove a taxi, and his mother ran a knitting shop.

He started his business career at the age of 12, when he borrowed $200 from his uncle (or $2,740 in 2017 dollars) and purchased a license to sell newspapers in Boston. Aged 16 in 1948, he then borrowed $10,000 (or $102,349 in 2017 dollars) from his uncle to start a candy-vending-machine business. He attended the City College of New York, but did not graduate, and attended trade school in a failed attempt to become a court reporter, then subsequently joined the army.

After being discharged from the army, he established a business selling toiletry kits, then started another business named De-Ice-It which sold a chemical spray to help clear frozen windshields. In the 1960s, he started a charter tours business. He soon became a millionaire, although by his 30s he had built and lost his fortune twice. Over the course of his business career, Adelson has created almost 50 of his own businesses, making him a serial entrepreneur.

In the 1970s, Sheldon Adelson lived in Massachusetts with his wife, Sandra, and her three children, Mitchell, Gary and Shelley, whom Sheldon adopted when they were young. The couple divorced in 1988.

Adelson met Miriam Farbstein Ochshorn, a medical doctor, on a blind date the following year; they married in 1991. She was previously married to a Tel Aviv physician, Dr. Ariel Ochshorn, with whom she had two daughters. Miriam “Miri” Farbstein was born in Mandatory Palestine in 1946, to parents that fled Poland before the Holocaust and settled in the city of Haifa. After earning a Bachelor of Science in Microbiology and Genetics from the Hebrew University of Jerusalem and a medical degree from Tel Aviv University’s Sackler Medical School, she went on to become the chief internist in an emergency room at Tel Aviv’s Rokach (Hadassah) Hospital. In 1993, she founded a substance abuse center and research clinic there, and in 2000, the couple opened the Dr. Miriam and Sheldon G. Adelson Research Clinic in Las Vegas.

A June 2008 profile in The New Yorker detailed several controversies involving Adelson. In 2008 Richard Suen, a Hong Kong businessman who had helped Adelson make connections with leading Chinese officials in order to obtain the Macau license, took Adelson to court in Las Vegas alleging he had reneged on his agreement to allow Suen to profit from the venture. Suen won a $43.8 million judgement; in November 2010, the Nevada Supreme Court overturned the judgment and returned the case to the lower court for further consideration. In the 2013 retrial, the jury awarded Suen a verdict for $70 million. The judge added another $31.6 million in interest, bringing the total judgment against Adelson to $101.6 million. Adelson is appealing again. Adelson faces another trial over claims by three alleged “middlemen” in the deal who are suing for at least $450 million.

In February 2013, the Las Vegas Sands, in a regulatory filing, acknowledged that it had likely violated federal law that prohibits the bribing of foreign officials. Allegedly, Chinese officials were bribed to allow Adelson to build his Macau casino.

Adelson successfully sued the London Daily Mail for libel in 2008. The newspaper had accused him of pursuing “despicable business practices” and having “habitually and corruptly bought political favour”. Adelson won the libel case, which was described as “a grave slur on Mr Adelson’s personal integrity and business reputation”, and he won a judgment of approximately £4 million, which he said he would donate to London’s Royal Marsden Hospital.

In August 2012, the Democratic Congressional Campaign Committee (DCCC), after being threatened with a libel suit, apologized and withdrew two blog posts that claimed Adelson had donated “Chinese prostitution money” to Republicans. Another organization, the National Jewish Democratic Council, posted on their website that Adelson “personally approved” of prostitution at his Macau resorts. Adelson sued for libel, but a federal judge dismissed the suit in September 2013, ordering Adelson to pay the NJDC’s legal fees.

In 2007, Adelson’s estimated wealth was $26.5 billion, making him the third-richest person in the United States according to Forbes. and $26 billion for 2008.

In 2008, the share prices of the Las Vegas Sands Corp. plunged. In November 2008, Las Vegas Sands Corp. announced it might default on bonds that it had outstanding, signaling the potential bankruptcy of the concern.[130] Adelson lost $4 billion in 2008, more than any other American billionaire. In 2009, his net worth had declined from approximately $30 billion to $2 billion, a drop of 93%. He told ABC News “So I lost $25 billion. I started out with zero…(there is) no such thing as fear, not to an entrepreneur. Concern, yes. Fear, no”. In the Forbes 2009 world billionaires list, Adelson’s ranking dropped to #178 with a net worth of $3.4 billion, but by 2011, after his business had recovered, he was ranked as the world’s 16th-richest man with a net worth of $23.3 billion.

In 2013, Adelson earned a top ranking on Forbes’ Annual “Biggest Winner” List, his dramatic growth a result of the success of his casinos in Macau and Singapore, adding an estimated $15 billion to his net worth during the year. In 2013, Adelson was worth $37.2 billion according to Forbes, and as of December 2014, his net worth is $30.4 billion.

Adelson owns a fleet of private jets through Las Vegas Sands. On January 2, 2017, Adelson’s Airbus A340-500 jet set a record for the Ben Gurion International Airport by making the longest flight ever leaving the airport by flying nonstop to Honolulu, Hawaii by way of the Arctic Ocean.

In 2001, Adelson was diagnosed with peripheral neuropathy, which restricts his ability to stand and walk. On February 28, 2019, Las Vegas Sands announced that Adelson was receiving treatment for non-Hodgkin’s lymphoma. The news was disclosed after a Sands attorney claimed Adelson was too weak to sit for a deposition in a court case involving Richard Suen. Sands spokesman Ron Reese said the side effects of Adelson’s medical treatment had “restricted his availability to travel or keep regular office hours” but had not “prevented him from fulfilling his duties as chairman and CEO” of Las Vegas Sands.