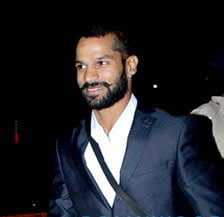 Shikhar Dhawan (born 5 December 1985) is an Indian international cricketer. A left-handed opening batsman and an occasional right-arm off break bowler, he plays for Delhi in domestic cricket and Delhi Capitals in the IPL. He played for the Indian Under-17 and Under-19 teams before making his first-class debut for Delhi in November 2004. At the 2015 World Cup, he was the leading run-scorer for India and in the following year, became the fastest Indian to reach 3,000 ODI runs. In December 2017, he became the 2nd fastest Indian to reach 4000 ODI runs. Dhawan also holds the record for most runs in a calendar year in Twenty20 International cricket (689). He is known for his successful and crucial knocks in ICC Tournaments.

Dhawan made his One Day International (ODI) debut against Australia in October 2010 at Visakhapatnam. His Test debut came against the same opposition in March 2013 at Mohali where he scored the fastest century by any batsman on Test debut and ended his innings with 187 runs from 174 balls. A prolific run-scorer in ICC tournaments, Dhawan top-scored in the 2004 Under-19 World Cup, and the 2013 and 2017 Champions Trophy tournaments, and holds the record for the fastest to reach 1000 runs in ICC ODI tournaments.

In August 2013, he recorded the then-second-highest individual score in a List A match when he scored 248 runs off 150 balls for India A against South Africa A at Pretoria. During the 4th ODI against South Africa in Johannesburg, he became the first Indian and ninth overall to score a century in his 100th ODI game. On 14 June 2018, against Afghanistan, he became the sixth batsman, and the first for India, to score a century before lunch on day one of a Test.

Shikhar Dhawan was born on 5 December 1985 in Delhi into Punjabi family to Sunaina and Mahendra Pal Dhawan. He completed his schooling from St. Mark’s Senior Secondary Public School in Meera bagh, Delhi. Since the age of 12, he trained at Sonnet Club under the guidance of coach Tarak Sinha, who has trained 12 international cricketers. Dhawan was a wicket-keeper when he first joined the Club.

Dhawan first played for Delhi Under-16s in the 1999/00 Vijay Merchant Trophy and was the leading run-scorer of the 2000/01 Vijay Merchant Trophy in which Delhi finished runners-up. He scored 755 runs from 9 innings at an average of 83.88 with two hundreds and a top score of 199. He was selected in the North Zone Under-16s squad for the Vijay Hazare Trophy in February 2001. He scored 30 and 66 in the semifinal against South Zone.

His impressive performances for Delhi Under-16s were rewarded when he was picked in the India Under-17 squad for the 2000/01 ACC Under-17 Asia Cup. He played three games in the tournament averaging 85. He was subsequently drafted into the Delhi Under-19 team in October 2001, at the age of 15, for the Cooch Behar Trophy. In the 2001/02 Vijay Merchant Trophy, Dhawan impressed once again with the bat by scoring 282 runs in 5 innings at an average of 70.50.

In October 2002, Dhawan was selected again in the Delhi Under-19 team for the Cooch Behar Trophy in which he made 388 runs from 8 innings at an average of 55.42 including two hundreds. He was then picked to play for North Zone Under-19s in January 2003 in the Vinoo Mankad Trophy. He scored 45 and 12 in the semifinal against Central Zone, before top-scoring for his team with 71 in the final on a seaming track in Rohtak against East Zone securing his team an innings-win. In the CK Nayudu Trophy held in February 2003, he averaged 55.50 with the bat for North Zone Under-19s. He continued to amass runs at the Under-19 domestic level as he scored 444 runs from 6 innings at an average of 74 in the Cooch Behar Trophy in October after which he was made the captain of the Delhi Under-19 team. Dhawan averaged 66.66 in the MA Chidambaram Trophy held in December that year which was his first tournament as captain.

Dhawan played for India in the 2004 Under-19 World Cup in Bangladesh and finished as the leading run-scorer of the tournament. His total of 505 runs from seven innings is a record for a single tournament that still stands. His runs came at an average of 84.16, with three centuries and a fifty, and was named Player of the Tournament. In the two youth Tests against England the following January, he had scores of 69, 18 and 41.