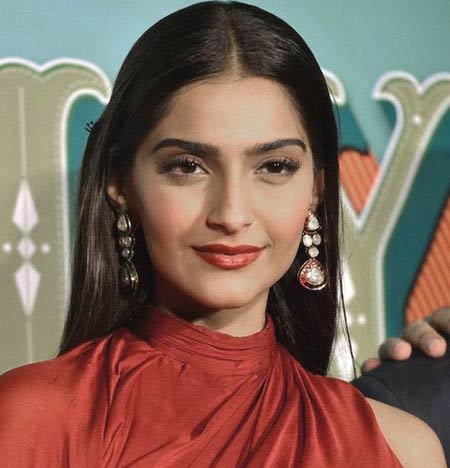 Sonam Kapoor Ahuja (pronounced [soːnəm kəˈpuːr ]; born 9 June 1985) is an Indian film actress. She has received a National Film Award and a Filmfare Award, and from 2012–2016, she appeared in Forbes India’s Celebrity 100 list based on her income and popularity.

Kapoor, the daughter of actor Anil Kapoor, began her career as an assistant director on filmmaker Sanjay Leela Bhansali’s 2005 drama Black. She later made her acting debut in Bhansali’s romantic drama Saawariya (2007), a box office flop, and had her first commercial success with the romantic comedy I Hate Luv Storys (2010). However, this was followed by a series of commercial failures and repetitive roles, which garnered her negative reviews. The 2013 box office hit Raanjhanaa marked a turning point in Kapoor’s career, garnering her praise and Best Actress nominations at several award ceremonies. Kapoor had her biggest commercial successes with supporting roles in the biopics Bhaag Milkha Bhaag (2013) and Sanju (2018), and a leading role in the romance Prem Ratan Dhan Payo (2015); the latter two rank among the highest-grossing Bollywood films. Her acclaimed portrayal of Neerja Bhanot in the 2016 biographical thriller Neerja won her the National Film Award – Special Mention and a Filmfare Critics Award for Best Actress, and she followed it with a starring role in the 2018 female buddy film Veere Di Wedding, both of which rank among the highest-grossing female-led Hindi films.

Kapoor supports the raising awareness of breast cancer and LGBT rights. Known in the media for her outspoken personality, she is frequently credited as one of India’s most fashionable celebrities. She is married to the businessman, Anand Ahuja.

Born into a prominent actor family, Kapoor has appeared in the media from an early age, and is one of the highest-paid actresses in Bollywood. After the success of Raanjhanaa and Bhaag Milkha Bhaag she was cited by Subhash K. Jha as one of the top actresses in India, though a commentator for Rediff.com notes that several of her films have been commercial failures. In 2009 she was the first Indian actress to appear on The Hollywood Reporter’s “Next Generation: Asia Class”, a list of newcomers in film. Outspoken publicly,[130] Kapoor’s comments about contemporaries and others in the Indian film industry have occasionally caused controversy. In a 2015 interview, she acknowledged that her opinions often get her into trouble, but remarked that “I believe it pays to be honest in the longer run”.

Kapoor is a popular figure nationally, with a significant following on Twitter since 2009 and Facebook. She appeared on The Huffington Post’s list of “100 most influential women on Twitter” in 2015. She has been described by the media as a style icon, and featured on Rediff.com’s list of “Bollywood’s Best Dressed Actresses” in 2012 and 2013. In 2013, the newspaper Hindustan Times and Indian edition of Vogue called her Style Icon (Reader’s Choice) and Beauty of the Year, respectively. Though Kapoor has earned praise for her dress sense and style, she has faced some criticism for wearing traditional Indian dresses.

Kapoor was ranked seventh on The Times of India’s 2010 “Most Desirable Woman” list, placing 14th, 28th and 14th the next three years, and was in the top ten of UK magazine Eastern Eye’s “World’s Sexiest Asian Women” list from 2011 to 2014. In 2012 and 2013 she also held 48th and 45th place, respectively, on the Indian edition of Forbes’ “Celebrity 100” lists, based on the income and popularity of Indian celebrities. She was named Woman of the Year by the men’s magazine GQ India in 2013. In 2014 and 2015, Kapoor reached 31st place and 26th position, respectively, peaking at the 18th position the following year with an annual income of ₹200 million (US$2.8 million). Kapoor has acquired several titles at the Filmfare Glamour and Style Awards—in 2015 she won for Most Stylish Star (Female) and Absolut Elyx Style & Substance Award, and in 2016, she was named Most Stylish Star (Female) and Red Carpet Royalty.

As well as endorsing brands such as Colgate, Electrolux, Lux, Mont Blanc, Oppo Mobile, Salvatore Ferragamo S.p.A. and Signature, Kapoor is the Indian ambassador for international cosmetics manufacturer L’Oréal. In 2011, she was named Brand Ambassador of the Year at the NDTV Good Times Gadget Guru Awards. Rediff.com reported in 2012 that she received ₹30 million (US$420,000) for each endorsement, making her one of the highest-paid celebrity endorsers in India.