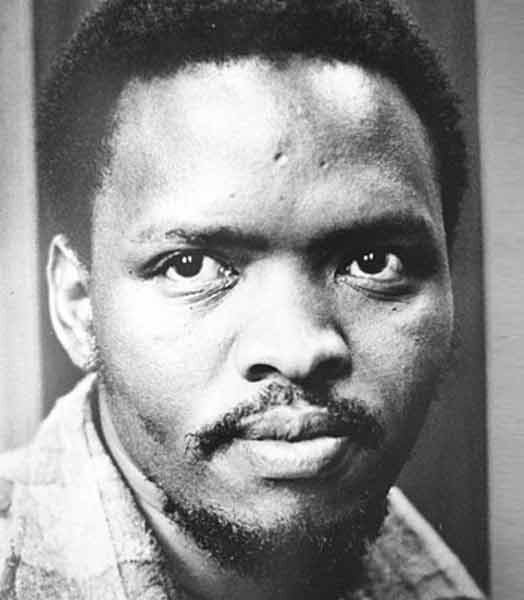 Bantu Stephen Biko (18 December 1946 – 12 September 1977) was a South African anti-apartheid activist. Ideologically an African nationalist and African socialist, he was at the forefront of a grassroots anti-apartheid campaign known as the Black Consciousness Movement during the late 1960s and 1970s. His ideas were articulated in a series of articles published under the pseudonym Frank Talk.

Raised in a poor Xhosa family, Biko grew up in Ginsberg township in the Eastern Cape. In 1966, he began studying medicine at the University of Natal, where he joined the National Union of South African Students (NUSAS). Strongly opposed to the apartheid system of racial segregation and white-minority rule in South Africa, Biko was frustrated that NUSAS and other anti-apartheid groups were dominated by white liberals, rather than by the blacks who were most affected by apartheid. He believed that well-intentioned white liberals failed to comprehend the black experience and often acted in a paternalistic manner. He developed the view that to avoid white domination, black people had to organise independently, and to this end he became a leading figure in the creation of the South African Students’ Organisation (SASO) in 1968. Membership was open only to “blacks”, a term that Biko used in reference not just to Bantu-speaking Africans but also to Coloureds and Indians. He was careful to keep his movement independent of white liberals, but opposed anti-white racism and had white friends and lovers. The white-minority National Party government were initially supportive, seeing SASO’s creation as a victory for apartheid’s ethos of racial separatism.

Influenced by the Martinican philosopher Frantz Fanon and the African-American Black Power movement, Biko and his compatriots developed Black Consciousness as SASO’s official ideology. The movement campaigned for an end to apartheid and the transition of South Africa toward universal suffrage and a socialist economy. It organised Black Community Programmes (BCPs) and focused on the psychological empowerment of black people. Biko believed that black people needed to rid themselves of any sense of racial inferiority, an idea he expressed by popularizing the slogan “black is beautiful”. In 1972, he was involved in founding the Black People’s Convention (BPC) to promote Black Consciousness ideas among the wider population. The government came to see Biko as a subversive threat and placed him under a banning order in 1973, severely restricting his activities. He remained politically active, helping organise BCPs such as a healthcare centre and a crèche in the Ginsberg area. During his ban he received repeated anonymous threats, and was detained by state security services on several occasions. Following his arrest in August 1977, Biko was beaten to death by state security officers. Over 20,000 people attended his funeral.

Biko’s fame spread posthumously. He became the subject of numerous songs and works of art, while a 1978 biography by his friend Donald Woods formed the basis for the 1987 film Cry Freedom. During Biko’s life, the government alleged that he hated whites, various anti-apartheid activists accused him of sexism, and African racial nationalists criticised his united front with Coloureds and Indians. Nonetheless, Biko became one of the earliest icons of the movement against apartheid, and is regarded as a political martyr and the “Father of Black Consciousness”. His political legacy remains a matter of contention.

Bantu Stephen Biko was born on 18 December 1946, at his grandmother’s house in Tarkastad, Eastern Cape. The third child of Mzingaye Mathew Biko and Alice ‘Mamcete’ Biko, he had an older sister, Bukelwa, an older brother, Khaya, and a younger sister, Nobandile. His parents had married in Whittlesea, where his father worked as a police officer. Mzingaye was transferred to Queenstown, Port Elizabeth, Fort Cox, and finally King William’s Town, where he and Alice settled in Ginsberg township. This was a settlement of around 800 families, with every four families sharing a water supply and toilet. Both Bantu African and Coloured people lived in the township, where Xhosa, Afrikaans, and English were all spoken. After resigning from the police force, Mzingaye worked as a clerk in the King William’s Town Native Affairs Office, while studying for a law degree by correspondence from the University of South Africa. Alice was employed first in domestic work for local white households, then as a cook at Grey Hospital in King William’s Town. According to his sister, it was this observation of his mother’s difficult working conditions that resulted in Biko’s earliest politicisation.

Biko’s given name “Bantu” means “people”; Biko interpreted this in terms of the saying “Umuntu ngumuntu ngabantu” (“a person is a person by means of other people”). As a child he was nicknamed “Goofy” and “Xwaku-Xwaku”, the latter a reference to his unkempt appearance. He was raised in his family’s Anglican Christian faith. In 1950, when Biko was four, his father fell ill, was hospitalised in St. Matthew’s Hospital, Keiskammahoek, and died, making the family dependent on his mother’s income.

Biko spent two years at St. Andrews Primary School and four at Charles Morgan Higher Primary School, both in Ginsberg. Regarded as a particularly intelligent pupil, he was allowed to skip a year. In 1963 he transferred to the Forbes Grant Secondary School in the township. Biko excelled at maths and English and topped the class in his exams. In 1964 the Ginsberg community offered him a bursary to join his brother Khaya as a student at Lovedale, a prestigious boarding school in Alice, Eastern Cape. Within three months of Steve’s arrival, Khaya was accused of having connections to Poqo, the armed wing of the Pan Africanist Congress (PAC), an African nationalist group which the government had banned. Both Khaya and Steve were arrested and interrogated by the police; the former was convicted, then acquitted on appeal. No clear evidence of Steve’s connection to Poqo was presented, but he was expelled from Lovedale. Commenting later on this situation, he stated: “I began to develop an attitude which was much more directed at authority than at anything else. I hated authority like hell.”

From 1964 to 1965, Biko studied at St. Francis College, a Catholic boarding school in Mariannhill, Natal. The college had a liberal political culture, and Biko developed his political consciousness there. He became particularly interested in the replacement of South Africa’s white minority colonial government with an administration that represented the country’s black majority. Among the anti-colonialist leaders who became Biko’s heroes at this time were Algeria’s Ahmed Ben Bella and Kenya’s Jaramogi Oginga Odinga. He later said that most of the “politicos” in his family were sympathetic to the PAC, which had anti-communist and African racialist ideas. Biko admired what he described as the PAC’s “terribly good organisation” and the courage of many of its members, but he remained unconvinced by its racially exclusionary approach, believing that members of all racial groups should unite against the government. In December 1964, he travelled to Zwelitsha for the ulwaluko circumcision ceremony, symbolically marking his transition from boyhood to manhood.

In 1977, Biko broke his banning order by travelling to Cape Town, hoping to meet Unity Movement leader Neville Alexander and deal with growing dissent in the Western Cape branch of the BCM, which was dominated by Marxists like Johnny Issel. Biko drove to the city with his friend Peter Jones on 17 August, but Alexander refused to meet with Biko, fearing that he was being monitored by the police. Biko and Jones drove back toward King William’s Town, but on 18 August they were stopped at a police roadblock near Grahamstown. Biko was arrested for having violated the order restricting him to King William’s Town. Unsubstantiated claims have been made that the security services were aware of Biko’s trip to Cape Town and that the road block had been erected to catch him. Jones was also arrested at the roadblock; he was subsequently held without trial for 533 days, during which he was interrogated on numerous occasions.

The security services took Biko to the Walmer police station in Port Elizabeth, where he was held naked in a cell with his legs in shackles. On 6 September, he was transferred from Walmer to room 619 of the security police headquarters in the Sanlam Building in central Port Elizabeth, where he was interrogated for 22 hours, handcuffed and in shackles, and chained to a grille. Exactly what happened has never been ascertained, but during the interrogation he was severely beaten by at least one of the ten security police officers. He suffered three brain lesions that resulted in a massive brain haemorrhage on 6 September. Following this incident, Biko’s captors forced him to remain standing and shackled to the wall. The police later said that Biko had attacked one of them with a chair, forcing them to subdue him and place him in handcuffs and leg irons.

Biko was examined by a doctor, Ivor Lang, who stated that there was no evidence of injury on Biko. Later scholarship has suggested Biko’s injuries must have been obvious. He was then examined by two other doctors who, after a test showed blood cells to have entered Biko’s spinal fluid, agreed that he should be transported to a prison hospital in Pretoria. On 11 September, police loaded him into the back of a Land Rover, naked and manacled, and drove him 740 miles (1,190 km) to the hospital. There, Biko died alone in a cell on 12 September 1977. According to an autopsy, an “extensive brain injury” had caused “centralisation of the blood circulation to such an extent that there had been intravasal blood coagulation, acute kidney failure, and uremia”. He was the twenty-first person to die in a South African prison in twelve months, and the forty-sixth political detainee to die during interrogation since the government introduced laws permitting imprisonment without trial in 1963.

Tall and slim in his youth, by his twenties Biko was over six feet tall, with the “bulky build of a heavyweight boxer carrying more weight than when in peak condition”, according to Woods. His friends regarded him as “handsome, fearless, a brilliant thinker”. Woods saw him as “unusually gifted … His quick brain, superb articulation of ideas and sheer mental force were highly impressive.” According to Biko’s friend Trudi Thomas, with Biko “you had a remarkable sense of being in the presence of a great mind”. Woods felt that Biko “could enable one to share his vision” with “an economy of words” because “he seemed to communicate ideas through extraverbal media – almost psychically.” Biko exhibited what Woods referred to as “a new style of leadership”, never proclaiming himself to be a leader and discouraging any cult of personality from growing up around him. Other activists did regard him as a leader and often deferred to him at meetings. When engaged in conversations, he displayed an interest in listening and often drew out the thoughts of others.

Biko married Ntsiki Mashalaba in December 1970. They had two children together: Nkosinathi, born in 1971, and Samora, born in 1975. Biko’s wife chose the name Nkosinathi (“The Lord is with us”), and Biko named their second child after the Mozambican revolutionary leader Samora Machel. Angered by her husband’s serial adultery, Mashalaba ultimately moved out of their home, and by the time of his death, she had begun divorce proceedings. Biko had also begun an extra-marital relationship with Mamphela Ramphele. In 1974, she bore him a daughter, Lerato, who died after two months. A son, Hlumelo, was born to Ramphele in 1978, after Biko’s death. Biko was also in a relationship with Lorrain Tabane, who bore him a child named Motlatsi in 1977.