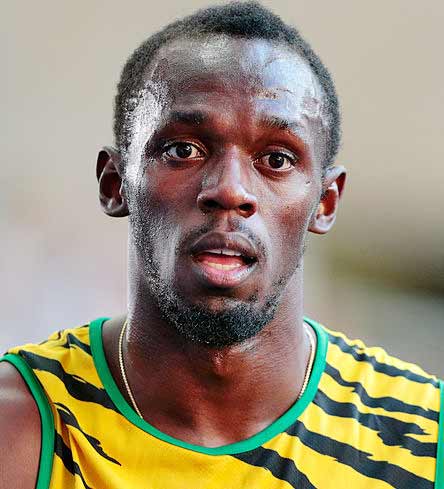 Usain St Leo Bolt, OJ, CD (born 21 August 1986) is a Jamaican former sprinter and widely considered to be the greatest sprinter of all time. He is a world record holder in the 100 metres, 200 metres and 4 × 100 metres relay.

An eight-time Olympic gold medallist, Bolt is the only sprinter to win Olympic 100 m and 200 m titles at three consecutive Olympics (2008, 2012 and 2016). He also won two 4 × 100 relay gold medals. He gained worldwide fame for his double sprint victory in world record times at the 2008 Beijing Olympics, which made him the first person to hold both records since fully automatic time became mandatory.

His achievements as a sprinter have earned him the media nickname “Lightning Bolt”, and his awards include the IAAF World Athlete of the Year, Track & Field Athlete of the Year, BBC Overseas Sports Personality of the Year (three times) and Laureus World Sportsman of the Year (four times). Bolt retired after the 2017 World Championships, when he finished third in his last solo 100 m race, opted out of the 200 m, and pulled up in the 4×100 m relay final.

Stating that it was his “dream” to play professional football, in August 2018, Bolt began training with A-League club the Central Coast Mariners as a left-winger. On 12 October 2018, Bolt scored twice for the team in a friendly match. He left the club the following month, and in January 2019 chose not to pursue a career in football.

Bolt was born on 21 August 1986 to parents Wellesley and Jennifer Bolt in Sherwood Content, a small town in Jamaica. He has a brother, Sadiki, and a sister, Sherine. His parents ran the local grocery store in the rural area, and Bolt spent his time playing cricket and football in the street with his brother, later saying, “When I was young, I didn’t really think about anything other than sports.”As a child, Bolt attended Waldensia Primary, where he began showing his sprint potential when he ran in his parish’s annual national primary school meet. By the age of twelve, Bolt had become the school’s fastest runner over the 100 metres distance.

Upon his entry to William Knibb Memorial High School, Bolt continued to focus on other sports, but his cricket coach noticed Bolt’s speed on the pitch and urged him to try track and field events. Pablo McNeil, a former Olympic sprint athlete, and Dwayne Jarrett coached Bolt, encouraging him to focus his energy on improving his athletic abilities. The school had a history of success in athletics with past students, including sprinter Michael Green. Bolt won his first annual high school championships medal in 2001; he took the silver medal in the 200 metres with a time of 22.04 seconds. McNeil soon became his primary coach, and the two enjoyed a positive partnership, although McNeil was occasionally frustrated by Bolt’s lack of dedication to his training and his penchant for practical jokes.

When Bolt was a boy, he attended Sherwood Content Seventh-day Adventist Church in Trelawny, Jamaica, with his mother. His mother did not serve pork to him in accordance with Adventist beliefs.

Bolt expresses a love for dancing and his character is frequently described as laid-back and relaxed. His Jamaican track and field idols include Herb McKenley and former Jamaican 100 m and 200 m world record holder Don Quarrie. Michael Johnson, the former 200 m world and Olympic record holder, is also held in high esteem by Bolt.

Bolt has the nickname “Lightning Bolt” due to his name and speed. He is Catholic and known for making the sign of the cross before racing competitively, and he wears a Miraculous Medal during his races. His middle name is St. Leo.

In 2010, Bolt also revealed his fondness of music, when he played a reggae DJ set to a crowd in Paris. He is also an avid fan of the Call of Duty video game series, saying, “I stay up late [playing the game online], I can’t help it.”

In his autobiography, Bolt reveals that he has suffered from scoliosis, a condition that has curved his spine to the right and has made his right leg 1⁄2 inch (13 mm) shorter than his left. A result of this is that his left leg remains on the ground 14 percent longer than his right leg, with left leg striking the ground with a force of 955 lbf (4,250 N) and right with 1,080 lbf (4,800 N). Biomechanics researchers have studied, with no firm conclusions, whether this asymmetry has helped or hurt Bolt in his sprinting career.

He popularised the “lightning bolt” pose, also known as “to di world” or “bolting”, which he used both before races and in celebration. The pose consists of extending a slightly raised left arm to the side and the right arm folded across the chest, with both hands have the thumb and index finger outstretched. His performance of the pose during his Olympic and World Championship victories led to widespread copying of the move, from American President Barack Obama to small children. It has been suggested that the pose comes from Jamaican dancehall moves of the period, though Olympic sprint champion Bernard Williams also had performed similar celebration moves earlier that decade.

Bolt’s personal best of 9.58 seconds in 2009 in the 100 metres is the fastest ever run.[316] Bolt also holds the second fastest time of 9.63 seconds,[87] the current Olympic record,[89] and set two previous world records in the event. Bolt’s personal best of 19.19 s in the 200 metres is the world record. This was recorded at the 2009 World Championships in Athletics in Berlin against a headwind of −0.3 m/s. This performance broke his previous world record in the event, his 19.30 s clocking in winning the 2008 Olympic 200 metres title.

Bolt has been on three world-record-setting Jamaican relay teams. The first record, 37.10 seconds, was set in winning gold at the 2008 Summer Olympics, although the result was voided in 2017 when the team was disqualified. The second record came at the 2011 World Championships in Athletics, a time of 37.04 seconds. The third world record was set at the 2012 Summer Olympics, a time of 36.84 seconds.