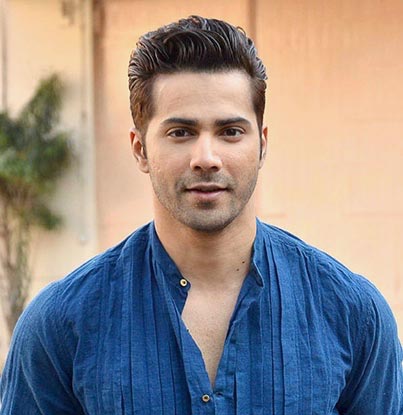 Varun Dhawan (born 24 April 1987) is an Indian actor. One of the country’s highest-paid celebrities, he has featured in Forbes India’s Celebrity 100 list since 2014. Several of the films in which he starred were commercially successful, establishing Dhawan in Hindi cinema.

Born to the film director David Dhawan, he studied business management from the Nottingham Trent University, after which he worked as an assistant director to Karan Johar on the 2010 drama My Name Is Khan. He made his acting debut in 2012 in Johar’s teen drama Student of the Year. He rose to prominence with starring roles in the romantic comedies Main Tera Hero (2014), Humpty Sharma Ki Dulhania (2014), and Badrinath Ki Dulhania (2017); the action comedies Dilwale (2015), Dishoom (2016), and Judwaa 2 (2017); the dance film ABCD 2 (2015); and the drama Sui Dhaaga (2018). He also received praise for playing an avenger in the crime thriller Badlapur (2015) and an aimless man coping with loss in the drama October (2018).

Dhawan was born on 24 April 1987 to David Dhawan, a film director, and Karuna Dhawan. His elder brother, Rohit, is a film director, while his uncle, Anil, is an actor. He completed his HSC education from the H.R. College of Commerce and Economics. Dhawan has a degree in Business Management from the Nottingham Trent University, United Kingdom. Prior to his acting career, Dhawan worked as an assistant director to Karan Johar on his drama My Name Is Khan (2010).