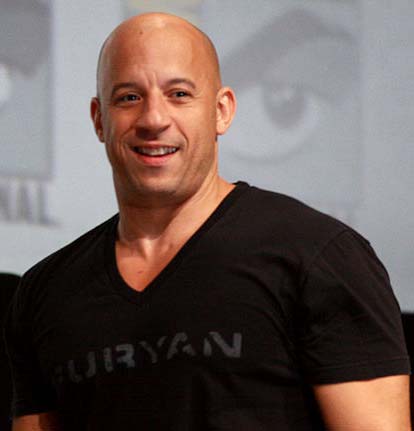 Mark Sinclair (born July 18, 1967), known professionally as Vin Diesel, is an American actor, producer, director, and screenwriter. He is best known for playing Dominic Toretto in the Fast & Furious franchise, and is one of the highest-grossing actors of all time.

Diesel also voiced Groot in Guardians of the Galaxy (2014) and its sequel (2017), as well as Ralph Breaks the Internet (2018). Away from action films, he has enjoyed commercial success in a number of other genres, such as the comedy film The Pacifier (2005), while his performance in Find Me Guilty (2006) was praised. Diesel portrayed the comic book superhero Bloodshot in its 2020 film adaptation, and is slated to appear in the Avatar sequels.

He also founded the production company One Race Films, where he has also served as a producer or executive producer for a number of his star vehicles. Diesel also founded the record label Racetrack Records and video game developer Tigon Studios, and has provided his voice and motion capture for all of Tigon’s releases.

Diesel was born Mark Sinclair on July 18, 1967, in Alameda County, California, with his fraternal twin brother, Paul. His mother, Delora Sherleen Vincent (née Sinclair), is an astrologer. Diesel has stated that he is “of ambiguous ethnicity”. His mother has English, German, and Scottish roots. He has never met his biological father, and has stated that “all I know from my mother is that I have connections to many different cultures”. Diesel has self-identified as “definitely a person of color”, and has stated that his parents’ relationship would have been illegal in parts of the United States due to anti-miscegenation laws. He was raised in New York City by his white American mother and African-American stepfather, Irving H. Vincent, an acting instructor and theater manager.

Diesel made his stage debut at age seven when he appeared in the children’s play Dinosaur Door, written by Barbara Garson. The play was produced at Theater for the New City in New York’s Greenwich Village. His involvement in the play came about when he, his brother and some friends had broken into the Theater for the New City space on Jane Street with the intent to vandalize it. They were confronted by the theater’s artistic director, Crystal Field, who offered them roles in the upcoming show instead of calling the police.Diesel remained involved with the theater throughout adolescence, going on to attend NYC’s Hunter College, where studies in creative writing led him to begin screenwriting. He has identified himself as a “multi-faceted” actor.