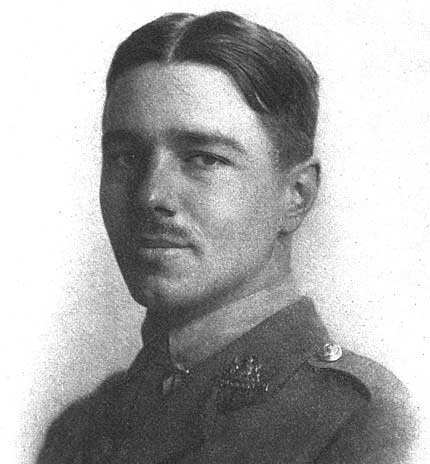 Cause of Death: Killed in action

Wilfred Edward Salter Owen, MC (18 March 1893 – 4 November 1918) was an English poet and soldier. He was one of the leading poets of the First World War. His war poetry on the horrors of trenches and gas warfare was much influenced by his mentor Siegfried Sassoon and stood in contrast to the public perception of war at the time and to the confidently patriotic verse written by earlier war poets such as Rupert Brooke. Among his best-known works – most of which were published posthumously – are “Dulce et Decorum est”, “Insensibility”, “Anthem for Doomed Youth”, “Futility”, “Spring Offensive” and “Strange Meeting”.

Owen was born on 18 March 1893 at Plas Wilmot, a house in Weston Lane, near Oswestry in Shropshire. He was the eldest of Thomas and (Harriett) Susan Owen (née Shaw)’s four children; his siblings were Mary Millard, (William) Harold, and Colin Shaw Owen. When Wilfred was born, his parents lived in a comfortable house owned by his grandfather, Edward Shaw.

After Edward’s death in January 1897, and the house’s sale in March, the family lodged in the back streets of Birkenhead. There Thomas Owen temporarily worked in the town employed by a railway company. Thomas transferred to Shrewsbury in April 1897 where the family lived with Thomas’ parents in Canon Street.

Thomas Owen transferred back to Birkenhead, again in 1898 when he became stationmaster at Woodside station. The family lived with him at three successive homes in the Tranmere district, They then moved back to Shrewsbury in 1907. Wilfred Owen was educated at the Birkenhead Institute and at Shrewsbury Technical School (later known as the Wakeman School).

Owen discovered his poetic vocation in about 1904 during a holiday spent in Cheshire. He was raised as an Anglican of the evangelical type, and in his youth was a devout believer, in part thanks to his strong relationship with his mother, which lasted throughout his life. His early influences included the Bible and the Romantic poets, particularly John Keats.

Owen’s last two years of formal education saw him as a pupil-teacher at the Wyle Cop school in Shrewsbury. In 1911 he passed the matriculation exam for the University of London, but not with the first-class honours needed for a scholarship, which in his family’s circumstances was the only way he could have afforded to attend.

In return for free lodging, and some tuition for the entrance exam (this has been questioned) Owen worked as lay assistant to the Vicar of Dunsden near Reading, living in the vicarage from September 1911 to February 1913. During this time he attended classes at University College, Reading (now the University of Reading), in botany and later, at the urging of the head of the English Department, took free lessons in Old English. His time spent at Dunsden parish led him to disillusionment with the Church, both in its ceremony and its failure to provide aid for those in need.

From 1913 he worked as a private tutor teaching English and French at the Berlitz School of Languages in Bordeaux, France, and later with a family. There he met the older French poet Laurent Tailhade, with whom he later corresponded in French. When war broke out, Owen did not rush to enlist – and even considered the French army – but eventually returned to England.

Owen was killed in action on 4 November 1918 during the crossing of the Sambre–Oise Canal, exactly one week (almost to the hour) before the signing of the Armistice which ended the war, and was promoted to the rank of Lieutenant the day after his death. His mother received the telegram informing her of his death on Armistice Day, as the church bells in Shrewsbury were ringing out in celebration. Owen is buried at Ors Communal Cemetery, Ors, in northern France. The inscription on his gravestone, chosen by his mother Susan, is based on a quote from his poetry: “SHALL LIFE RENEW THESE BODIES? OF A TRUTH ALL DEATH WILL HE ANNUL” W.O..

Owen is regarded by many as the greatest poet of the First World War, known for his verse about the horrors of trench and gas warfare. He had been writing poetry for some years before the war, himself dating his poetic beginnings to a stay at Broxton by the Hill when he was ten years old. The Romantic poets Keats and Shelley influenced much of his early writing and poetry. His great friend, the poet Siegfried Sassoon, later had a profound effect on his poetic voice, and Owen’s most famous poems (“Dulce et Decorum est” and “Anthem for Doomed Youth”) show direct results of Sassoon’s influence. Manuscript copies of the poems survive, annotated in Sassoon’s handwriting. Owen’s poetry would eventually be more widely acclaimed than that of his mentor. While his use of pararhyme with heavy reliance on assonance was innovative, he was not the only poet at the time to use these particular techniques. He was, however, one of the first to experiment with it extensively.

His poetry itself underwent significant changes in 1917. As a part of his therapy at Craiglockhart, Owen’s doctor, Arthur Brock, encouraged Owen to translate his experiences, specifically the experiences he relived in his dreams, into poetry. Sassoon, who was becoming influenced by Freudian psychoanalysis, aided him here, showing Owen through example what poetry could do. Sassoon’s use of satire influenced Owen, who tried his hand at writing “in Sassoon’s style”. Further, the content of Owen’s verse was undeniably changed by his work with Sassoon. Sassoon’s emphasis on realism and “writing from experience” was contrary to Owen’s hitherto romantic-influenced style, as seen in his earlier sonnets. Owen was to take both Sassoon’s gritty realism and his own romantic notions and create a poetic synthesis that was both potent and sympathetic, as summarised by his famous phrase “the pity of war”. In this way, Owen’s poetry is quite distinctive, and he is, by many, considered a greater poet than Sassoon. Nonetheless, Sassoon contributed to Owen’s popularity by his strong promotion of his poetry, both before and after Owen’s death, and his editing was instrumental in the making of Owen as a poet.

Owen’s poems had the benefit of strong patronage, and it was a combination of Sassoon’s influence, support from Edith Sitwell, and the preparation of a new and fuller edition of the poems in 1931 by Edmund Blunden that ensured his popularity, coupled with a revival of interest in his poetry in the 1960s which plucked him out of a relatively exclusive readership into the public eye. Though he had plans for a volume of verse, for which he had written a “Preface”, he never saw his own work published apart from those poems he included in The Hydra, the magazine he edited at Craiglockhart War Hospital, and “Miners”, which was published in The Nation.

There were many other influences on Owen’s poetry, including his mother. His letters to her provide an insight into Owen’s life at the front, and the development of his philosophy regarding the war. Graphic details of the horror Owen witnessed were never spared. Owen’s experiences with religion also heavily influenced his poetry, notably in poems such as “Anthem for Doomed Youth”, in which the ceremony of a funeral is re-enacted not in a church, but on the battlefield itself, and “At a Calvary near the Ancre”, which comments on the Crucifixion of Christ. Owen’s experiences in war led him further to challenge his religious beliefs, claiming in his poem “Exposure” that “love of God seems dying”.

Only five of Owen’s poems were published before his death, one in fragmentary form. His best known poems include “Anthem for Doomed Youth”, “Futility”, “Dulce Et Decorum Est”, “The Parable of the Old Men and the Young” and “Strange Meeting”. However, most of them were published posthumously: Poems (1920),The Poems of Wilfred Owen (1931),The Collected Poems of Wilfred Owen (1963),The Complete Poems and Fragments (1983); fundamental in this last collection is the poem Soldier’s Dream, that deals with Owen’s conception of war.

Owen’s full unexpurgated opus is in the academic two-volume work The Complete Poems and Fragments (1994) by Jon Stallworthy. Many of his poems have never been published in popular form.

In 1975 Mrs. Harold Owen, Wilfred’s sister-in-law, donated all of the manuscripts, photographs and letters which her late husband had owned to the University of Oxford’s English Faculty Library. As well as the personal artifacts, this also includes all of Owen’s personal library and an almost complete set of The Hydra – the magazine of Craiglockhart War Hospital. These can be accessed by any member of the public on application in advance to the English Faculty librarian.

The Harry Ransom Humanities Research Center at the University of Texas at Austin holds a large collection of Owen’s family correspondence.

An important turning point in Owen scholarship occurred in 1987 when the New Statesman published a stinging polemic ‘The Truth Untold’ by Jonathan Cutbill, the literary executor of Edward Carpenter, which attacked the academic suppression of Owen as a poet of homosexual experience. Amongst the points it made was that the poem “Shadwell Stair”, previously alleged to be mysterious, was a straightforward elegy to homosexual soliciting in an area of the London docks once renowned for it.