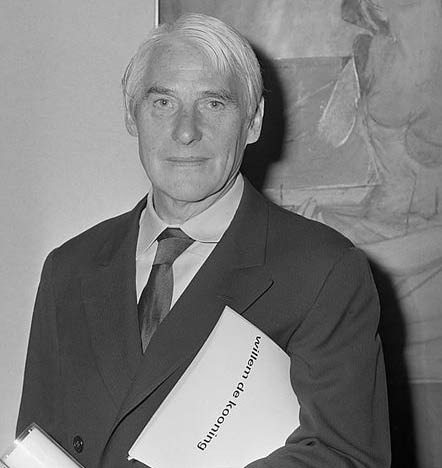 Willem de Kooning was born in Rotterdam, the Netherlands, on April 24, 1904. His parents, Leendert de Kooning and Cornelia Nobel, were divorced in 1907, and de Kooning lived first with his father and then with his mother. He left school in 1916 and became an apprentice in a firm of commercial artists. Until 1924 he attended evening classes at the Academie van Beeldende Kunsten en Technische Wetenschappen (the academy of fine arts and applied sciences of Rotterdam), now the Willem de Kooning Academie.

In the years after World War II, de Kooning painted in a style that came to be referred to as abstract expressionism or “action painting”, and was part of a group of artists that came to be known as the New York School. Other painters in this group included Jackson Pollock, Elaine de Kooning, Lee Krasner, Franz Kline, Arshile Gorky, Mark Rothko, Hans Hofmann, Nell Blaine, Adolph Gottlieb, Anne Ryan, Robert Motherwell, Philip Guston, Clyfford Still, and Richard Pousette-Dart. De Kooning’s retrospective held at MoMa in 2011–2012 made him one of the most well known artists of the 20th century.

In 1926 de Kooning travelled to the United States as a stowaway on the Shelley, a British freighter bound for Argentina, and on August 15 landed at Newport News, Virginia. He stayed at the Dutch Seamen’s Home in Hoboken, New Jersey, and found work as a house-painter. In 1927 he moved to Manhattan, where he had a studio on West Forty-fourth Street. He supported himself with jobs in carpentry, house-painting and commercial art.

De Kooning began painting in his free time and in 1928 he joined the art colony at Woodstock, New York. He also began to meet some of the modernist artists active in Manhattan. Among them were the American Stuart Davis, the Armenian Arshile Gorky and the Russian John Graham, whom de Kooning collectively called the “Three Musketeers”. Gorky, whom de Kooning first met at the home of Misha Reznikoff, became a close friend and, for at least ten years, an important influence. Balcomb Greene said that “de Kooning virtually worshipped Gorky”; according to Aristodimos Kaldis, “Gorky was de Kooning’s master”. De Kooning’s drawing Self-portrait with Imaginary Brother, from about 1938, may show him with Gorky; the pose of the figures is that of a photograph of Gorky with Peter Busa in about 1936.

De Kooning joined the Artists Union in 1934, and in 1935 was employed in the Federal Art Project of the Works Progress Administration, for which he designed a number of murals including some for the Williamsburg Federal Housing Project in Brooklyn. None of them were executed, but a sketch for one was included in New Horizons in American Art at the Museum of Modern Art, his first group show. Starting in 1937, when De Kooning had to leave the Federal Art Project because he did not have American citizenship, he began to work full-time as an artist, earning income from commissions and by giving lessons. That year de Kooning was assigned to a portion of the mural Medicine for the Hall of Pharmacy at the 1939 World’s Fair in New York, which drew the attention of critics, the images themselves so completely new and distinct from the era of American realism.

De Kooning met his wife, Elaine Fried, at the American Artists School in New York. She was 14 years his junior. Thus was to begin a lifelong partnership affected by alcoholism, lack of money, love affairs, quarrels and separations. They were married on December 9, 1943. De Kooning worked on his first series of portrait paintings: standing or sedentary men like Two Men Standing, Man, and Seated Figure (Classic Male), even combining with self-portraits as with Portrait with Imaginary Brother (1938–39). At this time, de Kooning’s work borrowed strongly from Gorky’s surrealist imagery and was influenced by Picasso. This changed only when de Kooning met the younger painter Franz Kline, who was also working with the figurative style of American realism and had been drawn to monochrome. Kline, who died young, was one of de Kooning’s closest artist friends. Kline’s influence is evident in de Kooning’s calligraphic black images of this period.

In the late 1950s, de Kooning’s work shifted away from the figurative work of the women (though he would return to that subject matter on occasion) and began to display an interest in more abstract, less representational imagery. He became a US citizen on 13 March 1962, and in the following year moved from Broadway to a small house in East Hampton, a house which Elaine’s brother Peter Fried had sold to him two years before. He built a studio near by, and lived in the house to the end of his life.

It was revealed that, toward the end of his life, de Kooning had begun to lose his memory in the late 1980s and had been suffering from Alzheimer’s disease for some time. This revelation has initiated considerable debate among scholars and critics about how responsible de Kooning was for the creation of his late work.

Succumbing to the progression of his disease, de Kooning painted his final works in 1991. He died in 1997 at the age of 92 and was cremated.

Elaine had admired Willem’s artwork before meeting him; in 1938 her teacher introduced her to de Kooning at a Manhattan cafeteria when she was 20 and he 34. After meeting, he began to instruct her in drawing and painting. They painted in Willem’s loft at 143 West 21st Street, and he was known for his harsh criticism of her work, “sternly requiring that she draw and redraw a figure or still life and insisting on fine, accurate, clear linear definition supported by precisely modulated shading.” He even destroyed many of her drawings, but this “impelled Elaine to strive for both precision and grace in her work”. When they married in 1943, she moved into his loft and they continued sharing studio spaces.

Elaine and Willem de Kooning had what was later called an open marriage; they both were casual about sex and about each other’s affairs. Elaine had affairs with men who helped further Willem’s career, such as Harold Rosenberg, who was a renowned art critic, Thomas B. Hess, who was a writer about art and managing editor for Artnews, and Charles Egan, owner of the Charles Egan Gallery. Willem had a daughter, Lisa de Kooning, in 1956, as a result of his affair with Joan Ward.

Elaine and Willem both struggled with alcoholism, which eventually led to their separation in 1957. While separated, Elaine remained in New York, struggling with poverty, and Willem moved to Long Island and dealt with depression. Despite bouts with alcoholism, they both continued painting. Although separated for nearly twenty years, they never divorced, and ultimately reunited in 1976.