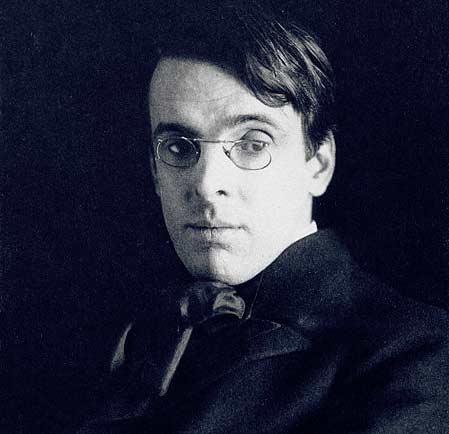 William Butler Yeats (13 June 1865 – 28 January 1939) was an Irish poet and one of the foremost figures of 20th-century literature. A pillar of the Irish literary establishment, he helped to found the Abbey Theatre, and in his later years served two terms as a Senator of the Irish Free State. He was a driving force behind the Irish Literary Revival along with Lady Gregory, Edward Martyn and others.

Yeats was born in Sandymount, Ireland, and educated there and in London. He spent childhood holidays in County Sligo and studied poetry from an early age, when he became fascinated by Irish legends and the occult. These topics feature in the first phase of his work, which lasted roughly until the turn of the 20th century. His earliest volume of verse was published in 1889, and its slow-paced and lyrical poems display debts to Edmund Spenser, Percy Bysshe Shelley, and the poets of the Pre-Raphaelite Brotherhood. From 1900, his poetry grew more physical and realistic. He largely renounced the transcendental beliefs of his youth, though he remained preoccupied with physical and spiritual masks, as well as with cyclical theories of life. In 1923, he was awarded the Nobel Prize in Literature.

William Butler Yeats was born in Sandymount in County Dublin, Ireland. His father, John Butler Yeats (1839–1922), was a descendant of Jervis Yeats, a Williamite soldier, linen merchant, and well-known painter, who died in 1712. Benjamin Yeats, Jervis’s grandson and William’s great-great-grandfather, had in 1773 married Mary Butler of a landed family in County Kildare. Following their marriage, they kept the name Butler. Mary was of the Butler of Neigham (pronounced Nyam) Gowran family, descended from an illegitimate brother of the 8th Earl of Ormond.

At the time of his marriage, William’s father, John Yeats, was studying law, but would later pursue art studies at Heatherley School of Fine Art, in London. William’s mother, Susan Mary Pollexfen, came from Sligo, from a wealthy merchant family, which owned a milling and shipping business. Soon after William’s birth, the family relocated to the Pollexfen home at Merville, Sligo, to stay with her extended family, and the young poet came to think of the area as his childhood and spiritual home. Its landscape became, over time, both personally and symbolically, his “country of the heart”. So too did its location by the sea; John Yeats stated that “by marriage with a Pollexfen, we have given a tongue to the sea cliffs”. The Butler Yeats family were highly artistic; his brother Jack became an esteemed painter, while his sisters Elizabeth and Susan Mary—known to family and friends as Lollie and Lily—became involved in the Arts and Crafts movement.

Yeats was raised a member of the Protestant Ascendancy, which was at the time undergoing a crisis of identity. While his family was broadly supportive of the changes Ireland was experiencing, the nationalist revival of the late 19th century directly disadvantaged his heritage and informed his outlook for the remainder of his life. In 1997, his biographer R. F. Foster observed that Napoleon’s dictum that to understand the man you have to know what was happening in the world when he was twenty “is manifestly true of W.B.Y.” Yeats’s childhood and young adulthood were shadowed by the power-shift away from the minority Protestant Ascendancy. The 1880s saw the rise of Charles Stewart Parnell and the home rule movement; the 1890s saw the momentum of nationalism, while the Catholics became prominent around the turn of the century. These developments had a profound effect on his poetry, and his subsequent explorations of Irish identity had a significant influence on the creation of his country’s biography.

In 1867, the family moved to England to aid their father, John, to further his career as an artist. At first, the Yeats children were educated at home. Their mother entertained them with stories and Irish folktales. John provided an erratic education in geography and chemistry and took William on natural history explorations of the nearby Slough countryside. On 26 January 1877, the young poet entered the Godolphin school, which he attended for four years. He did not distinguish himself academically, and an early school report describes his performance as “only fair. Perhaps better in Latin than in any other subject. Very poor in spelling”. Though he had difficulty with mathematics and languages (possibly because he was tone deaf), he was fascinated by biology and zoology. In 1879 the family moved to Bedford Park taking a two-year lease on 8 Woodstock Road. For financial reasons, the family returned to Dublin toward the end of 1880, living at first in the suburbs of Harold’s Cross and later Howth. In October 1881, Yeats resumed his education at Dublin’s Erasmus Smith High School. His father’s studio was nearby and William spent a great deal of time there, where he met many of the city’s artists and writers. During this period he started writing poetry, and, in 1885, the Dublin University Review published Yeats’s first poems, as well as an essay entitled “The Poetry of Sir Samuel Ferguson”. Between 1884 and 1886, William attended the Metropolitan School of Art—now the National College of Art and Design—in Thomas Street. In March 1888 the family moved to 3 Blenheim Road in Bedford Park where they would remain until 1902. The rent on the house in 1888 was £50 a year.

He began writing his first works when he was seventeen; these included a poem—heavily influenced by Percy Bysshe Shelley—that describes a magician who set up a throne in central Asia. Other pieces from this period include a draft of a play about a bishop, a monk, and a woman accused of paganism by local shepherds, as well as love-poems and narrative lyrics on German knights. The early works were both conventional and, according to the critic Charles Johnston, “utterly unIrish”, seeming to come out of a “vast murmurous gloom of dreams”. Although Yeats’s early works drew heavily on Shelley, Edmund Spenser, and on the diction and colouring of pre-Raphaelite verse, he soon turned to Irish mythology and folklore and the writings of William Blake. In later life, Yeats paid tribute to Blake by describing him as one of the “great artificers of God who uttered great truths to a little clan”. In 1891, Yeats published John Sherman and “Dhoya”, one a novella, the other a story. The influence of Oscar Wilde is evident in Yeats’s theory of aesthetics, especially in his stage plays, and runs like a motif through his early works. The theory of masks, developed by Wilde in his polemic The Decay of Lying can clearly be seen in Yeats’s play The Player Queen, while the more sensual characterisation of Salomé, in Wilde’s play of the same name, provides the template for the changes Yeats made in his later plays, especially in On Baile’s Strand (1904), Deirdre (1907), and his dance play The King of the Great Clock Tower (1934).

By early 1925, Yeats’s health had stabilised, and he had completed most of the writing for A Vision (dated 1925, it actually appeared in January 1926, when he almost immediately started rewriting it for a second version). He had been appointed to the first Irish Senate in 1922, and was re-appointed for a second term in 1925. Early in his tenure, a debate on divorce arose, and Yeats viewed the issue as primarily a confrontation between the emerging Roman Catholic ethos and the Protestant minority. When the Roman Catholic Church weighed in with a blanket refusal to consider their anti position, The Irish Times countered that a measure to outlaw divorce would alienate Protestants and “crystallise” the partition of Ireland.

In response, Yeats delivered a series of speeches that attacked the “quixotically impressive” ambitions of the government and clergy, likening their campaign tactics to those of “medieval Spain.” “Marriage is not to us a Sacrament, but, upon the other hand, the love of a man and woman, and the inseparable physical desire, are sacred. This conviction has come to us through ancient philosophy and modern literature, and it seems to us a most sacrilegious thing to persuade two people who hate each other… to live together, and it is to us no remedy to permit them to part if neither can re-marry.”The resulting debate has been described as one of Yeats’s “supreme public moments”, and began his ideological move away from pluralism towards religious confrontation.

His language became more forceful; the Jesuit Father Peter Finlay was described by Yeats as a man of “monstrous discourtesy”, and he lamented that “It is one of the glories of the Church in which I was born that we have put our Bishops in their place in discussions requiring legislation”. During his time in the Senate, Yeats further warned his colleagues: “If you show that this country, southern Ireland, is going to be governed by Roman Catholic ideas and by Catholic ideas alone, you will never get the North… You will put a wedge in the midst of this nation”. He memorably said of his fellow Irish Protestants, “we are no petty people”.

In 1924, he chaired a coinage committee charged with selecting a set of designs for the first currency of the Irish Free State. Aware of the symbolic power latent in the imagery of a young state’s currency, he sought a form that was “elegant, racy of the soil, and utterly unpolitical”. When the house finally decided on the artwork of Percy Metcalfe, Yeats was pleased, though he regretted that compromise had led to “lost muscular tension” in the finally depicted images. He retired from the Senate in 1928 because of ill health.

Towards the end of his life—and especially after the Wall Street Crash of 1929 and Great Depression, which led some to question whether democracy could cope with deep economic difficulty—Yeats seems to have returned to his aristocratic sympathies. During the aftermath of the First World War, he became sceptical about the efficacy of democratic government, and anticipated political reconstruction in Europe through totalitarian rule. His later association with Pound drew him towards Benito Mussolini, for whom he expressed admiration on a number of occasions. He wrote three “marching songs”—never used—for the Irish General Eoin O’Duffy’s Blueshirts.

Yeats is commemorated in Sligo town by a statue, created in 1989 by sculptor Rowan Gillespie. On the 50th anniversary of the poet’s death, it was erected outside the Ulster Bank, at the corner of Stephen Street and Markievicz Road. Yeats had remarked on receiving his Nobel Prize that the Royal Palace in Stockholm “resembled the Ulster Bank in Sligo”. Across the river is the Yeats Memorial Building, home to the Sligo Yeats Society. Standing Figure: Knife Edge by Henry Moore is displayed in the W. B. Yeats Memorial Garden at St Stephen’s Green in Dublin.