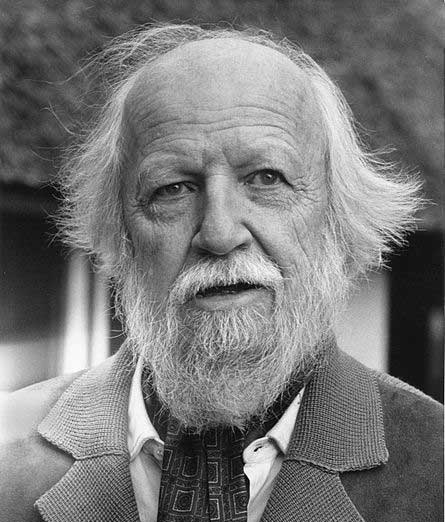 Sir William Gerald Golding was a novelist, playwright & poet. He is well known for his debut novel Lord of the Flies. Books Lord of the Flies (1954), The Inheritors (1955), The Spire (1964), Rites of Passage (1980), Pincher Martin (1956). His famous movies are Lord of the Flies, Alkitrang Dugo. He recieved many awards including Nobel Prize in Literature, Booker Prize.

William Golding was born in his grandmother’s house, 47 Mount Wise, Newquay, Cornwall, and he spent many childhood holidays there. He grew up in Marlborough, Wiltshire, where his father (Alec Golding) was a science master at Marlborough Grammar School (1905 to retirement). Alec Golding was a teacher at the school the young Golding and his elder brother Joseph attended. His mother, Mildred (Curnoe), kept house at 29, The Green, Marlborough, and was a campaigner for female suffrage. In 1930 Golding went to Brasenose College, Oxford, where he read Natural Sciences for two years before transferring to English Literature.

Golding took his B.A. degree with Second Class Honours in the summer of 1934, and later that year a book of his Poems was published by Macmillan & Co, with the help of his Oxford friend, the anthroposophist Adam Bittleston.

He was a schoolmaster teaching Philosophy and English in 1939, then just English from 1945 to 1961 at Bishop Wordsworth’s School, Salisbury, Wiltshire.

Golding married Ann Brookfield, an analytical chemist,(p161) on 30 September 1939. They had two children, Judith and David.

During World War II, Golding joined the Royal Navy in 1940. He fought (on board a destroyer) and was briefly involved in the pursuit and sinking of the German battleship Bismarck. He also participated in the invasion of Normandy on D-Day, commanding a landing ship that fired salvoes of rockets onto the beaches, and was in action at Walcheren in which 23 out of 24 assault crafts were sunk.

In 1985, Golding and his wife moved to Tullimaar House at Perranarworthal, near Truro, Cornwall. He died of heart failure eight years later, on 19 June 1993. He was buried in the village churchyard at Bowerchalke, South Wiltshire (near the Hampshire and Dorset county boundaries). He left the draft of a novel, The Double Tongue, set in ancient Delphi, which was published posthumously. His son David continues to live at Tullimaar House.

In September 1953, after many rejections from other publishers, Golding sent a manuscript to Faber & Faber and was initially rejected by their reader. His book however was championed by Charles Monteith, a new editor at the firm. Monteith asked for some changes to the text and the novel was published in September 1954 as Lord of the Flies.

After moving in 1958 from Salisbury to nearby Bowerchalke, he met his fellow villager and walking companion James Lovelock. The two discussed Lovelock’s hypothesis that the living matter of the planet Earth functions like a single organism, and Golding suggested naming this hypothesis after Gaia, the goddess of the earth in Greek mythology. His publishing success made it possible for Golding to resign his teaching post at Bishop Wordsworth’s School in 1961, and he spent that academic year in the United States as writer-in-residence at Hollins College, near Roanoke, Virginia.

Golding won the James Tait Black Memorial Prize in 1979, and the Booker Prize in 1980. In 1983 he was awarded the Nobel Prize for Literature, and was according to the Oxford Dictionary of National Biography “an unexpected and even contentious choice”.

In 1988 Golding was appointed a Knight Bachelor. In September 1993, only a few months after his sudden death, the First International William Golding Conference was held in France, where Golding’s presence had been promised and eagerly anticipated.

His first novel, Lord of the Flies (1954; film, 1963 and 1990; play, adapted by Nigel Williams, 1995), describes a group of boys stranded on a tropical island reverting to savagery. The Inheritors (1955) shows “new people” (generally identified with Homo sapiens sapiens), triumphing over a gentler race (generally identified with Neanderthals) by deceit and violence. His 1956 novel Pincher Martin records the thoughts of a drowning sailor. Free Fall (1959) explores the issue of free choice as a prisoner held in solitary confinement in a German POW camp during World War Two looks back over his life. The Spire (1964) follows the building (and near collapse) of a huge spire onto a medieval cathedral (generally assumed to be Salisbury Cathedral); the spire symbolizing both spiritual aspiration and worldly vanity. In his 1967 novel The Pyramid three separate stories in a shared setting (a small English town in the 1920s) are linked by a narrator, and The Scorpion God (1971) consists of three novellas, the first set in a prehistoric African hunter-gatherer band (‘Clonk, Clonk’), the second in an ancient Egyptian court (‘The Scorpion God’) and the third in the court of a Roman emperor (‘Envoy Extraordinary’). The last of these reworks his 1958 play The Brass Butterfly. His later novels include Darkness Visible (1979), which is about a terrorist group, a paedophile teacher, and a mysterious angel-like figure who survives a fire in The Blitz, The Paper Men (1984) which is about the conflict between a writer and his biographer, and a sea trilogy To the Ends of the Earth, which includes the Rites of Passage (1980), Close Quarters (1987), and Fire Down Below (1989), the first book of which (originally intended as a stand-alone novel) won the Booker Prize.