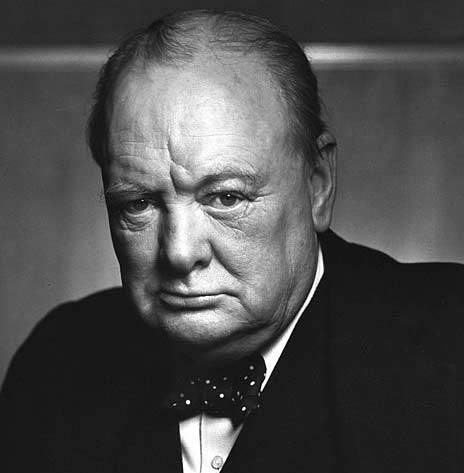 Of mixed English and American parentage, Churchill was born in Oxfordshire to a wealthy, aristocratic family. He joined the British Army in 1895 and saw action in British India, the Anglo-Sudan War, and the Second Boer War, gaining fame as a war correspondent and writing books about his campaigns. Elected a Conservative MP in 1900, he defected to the Liberals in 1904. In H. H. Asquith’s Liberal government, Churchill served as President of the Board of Trade and Home Secretary, championing prison reform and workers’ social security. As First Lord of the Admiralty during the First World War, he oversaw the Gallipoli Campaign but, after it proved a disaster, he was demoted to Chancellor of the Duchy of Lancaster. He resigned in November 1915 and joined the Royal Scots Fusiliers on the Western Front for six months. In 1917, he returned to government under David Lloyd George and served successively as Minister of Munitions, Secretary of State for War, Secretary of State for Air, and Secretary of State for the Colonies, overseeing the Anglo-Irish Treaty and British foreign policy in the Middle East. After two years out of Parliament, he served as Chancellor of the Exchequer in Stanley Baldwin’s Conservative government, returning the pound sterling in 1925 to the gold standard at its pre-war parity, a move widely seen as creating deflationary pressure and depressing the UK economy.

Out of office during the 1930s, Churchill took the lead in calling for British rearmament to counter the growing threat of militarism in Nazi Germany. At the outbreak of the Second World War he was re-appointed First Lord of the Admiralty. In May 1940, he became Prime Minister, replacing Neville Chamberlain. Churchill oversaw British involvement in the Allied war effort against the Axis powers, resulting in victory in 1945. After the Conservatives’ defeat in the 1945 general election, he became Leader of the Opposition. Amid the developing Cold War with the Soviet Union, he publicly warned of an “iron curtain” of Soviet influence in Europe and promoted European unity. Re-elected Prime Minister in 1951, his second term was preoccupied with foreign affairs, especially Anglo-American relations and, despite ongoing decolonisation, preservation of the British Empire. Domestically, his government emphasised house-building and developed a nuclear weapon. In declining health, Churchill resigned as prime minister in 1955, although he remained an MP until 1964. Upon his death in 1965, he was given a state funeral.

Widely considered one of the 20th century’s most significant figures, Churchill remains popular in the UK and Western world, where he is seen as a victorious wartime leader who played an important role in defending Europe’s liberal democracy from the spread of fascism. Also praised as a social reformer and writer, among his many awards was the Nobel Prize in Literature. Conversely, he has been widely criticised for some wartime events, notably the 1945 bombing of Dresden, and in recent years his imperialist views and certain comments on race have generated controversy.

Churchill was born at his family’s ancestral home, Blenheim Palace in Oxfordshire, on 30 November 1874. As direct descendants of the Dukes of Marlborough, his family were among the highest levels of the British aristocracy, and thus he was born into the country’s governing elite. His father, Lord Randolph Churchill, had been elected Conservative MP for Woodstock in 1873. His mother, Jennie, was a daughter of Leonard Jerome, a wealthy American businessman. The couple had married in April 1874, and, according to the biographer Sebastian Haffner, were “rich by normal standards but poor by those of the rich”.

In 1876, Churchill’s paternal grandfather, John Spencer-Churchill, was appointed Viceroy of Ireland, then part of the United Kingdom. Randolph became his private secretary, resulting in the family’s relocation to Dublin. Winston’s brother, Jack, was born there in 1880. Throughout much of the 1880s, Randolph and Jennie were effectively estranged, and the brothers were mostly cared for by their nanny, Elizabeth Everest. Churchill later wrote that “she had been my dearest and most intimate friend during the whole of the twenty years I had lived”.

Churchill began boarding at St. George’s School in Ascot, Berkshire, at age seven but was not academic and his behaviour was poor. In 1884 he transferred to Brunswick School in Hove, where his academic performance improved. In April 1888, aged 13, he narrowly passed the entrance exam for Harrow School. There, his academics proved high but his teachers again complained about his lack of discipline; his poetry appeared in the Harrovian school magazine. His father wanted him to prepare for a military career and so his last three years at Harrow were in the army form. After two unsuccessful attempts to gain admittance to the Royal Military Academy, Sandhurst, he succeeded on his third attempt. He was accepted as a cadet in the cavalry, starting in September 1893. His father died in January 1895, soon after Churchill finished at Sandhurst; this led Churchill to adopt the belief that members of his family inevitably died young.

Elizabeth II offered to create Churchill Duke of London, but this was declined as a result of the objections of his son Randolph, who would have inherited the title on his father’s death. He did, however, accept the Order of the Garter to become Sir Winston. Although publicly supportive, Churchill was privately scathing about Eden’s handling of the Suez Crisis and Clementine believed that many of his visits to the United States in the following years were attempts to help repair Anglo-American relations. After leaving the premiership, Churchill remained an MP until he stood down at the 1964 general election. By the time of the 1959 general election, however, he seldom attended the House of Commons. Despite the Conservative landslide in 1959, his own majority in Woodford fell by more than a thousand. He spent most of his retirement at Chartwell or at his London home in Hyde Park Gate, and became a habitué of high society at La Pausa on the French Riviera.

In June 1962, when he was 87, Churchill had a fall in Monte Carlo and broke his hip. He was flown home to a London hospital where he remained for three weeks. Jenkins says that Churchill was never the same after this accident and his last two years were something of a twilight period. In 1963, US President John F. Kennedy, acting under authorisation granted by an Act of Congress, proclaimed him an Honorary Citizen of the United States, but he was unable to attend the White House ceremony. There has been speculation that he became very depressed in his final years but this has been emphatically denied by his personal secretary Anthony Montague Browne, who was with him for his last ten years. Montague Browne wrote that he never heard Churchill refer to depression and certainly did not suffer from it.

Churchill suffered his final stroke on 12 January 1965. He died nearly two weeks later on the 24th, which was the seventieth anniversary of his father’s death. He was given a state funeral six days later on 30 January, the first for a non-royal person since W. E. Gladstone in 1898.

Planning for Churchill’s funeral had begun in 1953 under the code-name of “Operation Hope Not” and a detailed plan had been produced by 1958. His coffin lay in state at Westminster Hall for three days and the funeral ceremony was at St Paul’s Cathedral. Afterwards, the coffin was taken by boat along the River Thames to Waterloo Station and from there by a special train to the family plot at St Martin’s Church, Bladon, near his birthplace at Blenheim Palace.

Worldwide, numerous memorials have been dedicated to Churchill. His statue in Parliament Square was unveiled by Clementine in 1973 and is one of only twelve in the square, all of prominent political figures, including Churchill’s friend Lloyd George and his India policy nemesis Gandhi. Elsewhere in London, the wartime Cabinet War Rooms have been renamed the Churchill Museum and Cabinet War Rooms. An indication of Churchill’s high esteem in the UK is the result of the 2002 BBC poll, attracting 447,423 votes, in which he was voted the greatest Briton of all time, his nearest rival being Isambard Kingdom Brunel some 56,000 votes behind.

He is one of only eight people to be granted honorary citizenship of the United States; others include Lafayette, Raoul Wallenberg and Mother Teresa. The United States Navy honoured him in 1999 by naming a new Arleigh Burke-class destroyer as the USS Winston S. Churchill. Other memorials in North America include the National Churchill Museum in Fulton, Missouri, where he made the 1946 “Iron Curtain” speech; Churchill Square in central Edmonton, Alberta; and the Winston Churchill Range, a mountain range northwest of Lake Louise, also in Alberta, which was renamed after Churchill in 1956.