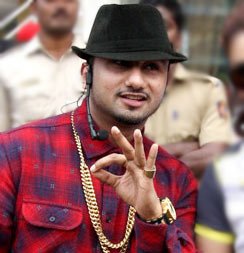 Hirdesh Singh (born 15 March 1983), known by his professional name, Yo Yo Honey Singh or Honey Singh, is an Indian music composer, rapper, pop singer and film actor. He started out as a session and recording artist, and became a bhangra music producer. Later, he got success with his music and started making songs for Bollywood films. Currently, he is one of the most paid artist in the Indian music industry.

Singh was born on 15 March 1983 at Hoshiarpur, Punjab to a Sikh family. His birth name is Hirdesh Singh. He studied music at the Trinity School in the United Kingdom. His family later moved to Delhi.

Singh is married to Shalini Talwar Singh, whom he introduced to audiences for the first time on the television show India’s Raw Star.

In late 2014, Singh disappeared from the music scene, before making a comeback the following year, but mostly avoided the media. In March 2016, he attributed his 18 month long absence from the public to his bipolar disorder.

Singh and Diljit Dosanjh’s song “Lak 28 Kudi Da” reached No. 1 in the BBC Asian Download Charts in May 2011. The song was released as a promotional track for Diljit Dosanjh’s film Lion of Punjab.

It has been reported that he was paid the highest fee ever for a Bollywood song (as of 2012) of ₹7 million (US$98,000) for a song in the films Cocktail and Mastan.

Singh prefers to sing in Hindi and his native language Punjabi rather than English.

The Punjabi album International Villager was released on 11 November 2011. The track “Gabru” from the album, featuring singer J-Star, topped the Asian music charts, including the official BBC Asian charts.

He has performed at many college festivals, including Ansal Institute of Technology and Ramjas College, Delhi.

His debut song in Bollywood films was Shakal Pe Mat Ja, featuring Gagan Sidhu. Singh charged Rs. 7 million for a song in the film Mastan. This was the largest amount paid to a song artist in Bollywood to date, making Singh one of the highest-paid musical artists in Bollywood.

Singh launched his single “Bring Me Back ft. Spoken Word” at the Video Music Awards India, which aired on MTV India. After the show, his song was premiered on the channel.

In late 2013, he produced songs in the films Chennai Express and Boss. He has also had songs in smaller-budget films such as Mere Dad Ki Maruti, Bajatey Raho and Fugly.

In February 2015 he released the songs “Birthday Bash”, followed by songs in films including Gabbar is Back and Bhaag Johnny. He faced an accident in 2016 and was unavailable for any project, hence giving his opponents to go through, Honey Singh Returned in late 2018 with the song MAKHNA, The song became a major success, also the same year he sung and composed songs for movie Baazaar & Sonu Ke Titu Ki Sweety.

Singh made his acting debut with Baljit Singh Deo’s Punjabi film Mirza – The Untold Story (2012), performing the role of Deesha, a mad gangster. Despite only being a cameo appearance, the role went on to win Singh the PTC Punjabi Film Award for Best Male Debut. The following year, Singh appeared in another Punjabi film, this time a comedy by Amit Prasher, Tu Mera 22 Main Tera 22, as Rolly, a childish and spoilt brat, alongside Amrinder Gill. This was Singh’s first main role in a film.

Singh then made his debut as an actor in Bollywood cinema with the 2014 musical-thriller film The Xpose, alongside Himesh Reshammiya. The film was released on 16 May 2014, to mixed reviews from critics, though it was a box office flop.

In 2016, Singh starred in the Punjabi action film Zorawar, directed by Vinnil Markan, which is marketed as one of the most expensive Punjabi films to date. The film was critically acclaimed.