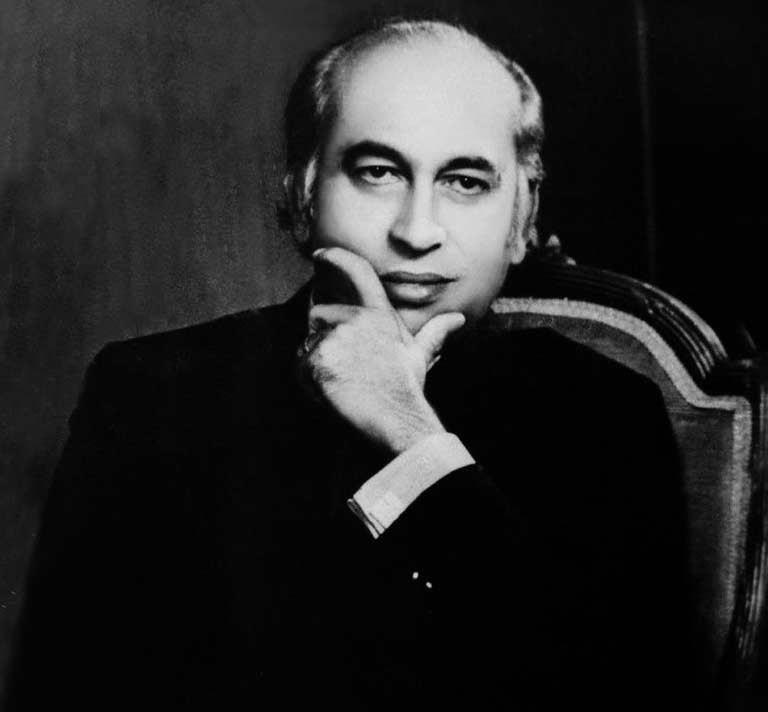 Cause of Death: Execution by hanging

Zulfikar Ali Bhutto Arain(Sindhi: ذوالفقار علي ڀٽو‎; Urdu: ذُوالفِقار علی بُھٹّو‎‎; 5 January 1928 – 4 April 1979) was a Pakistani barrister and politician who served as the 9th Prime Minister of Pakistan from 1973 to 1977, and prior to that as the fourth President of Pakistan from 1971 to 1973. He was also the founder of the Pakistan People’s Party (PPP) and served as its chairman until his execution in 1979.

Born in modern-day Sindh and educated at the University of California, Berkeley and the University of Oxford, Bhutto trained as a barrister at Lincoln’s Inn, before entering politics as one of President Iskander Mirza’s cabinet members, and was assigned several ministries during President Ayub Khan’s military rule from 1958. Appointed Foreign Minister in 1963, Bhutto was a proponent of Operation Gibraltar in Kashmir, leading to war with India in 1965. After the Tashkent Agreement ended hostilities, Bhutto fell out with Ayub Khan and was sacked from government.

Bhutto founded the PPP in 1967 on a socialist platform, and contested general elections held by President Yahya Khan in 1970. While the Awami League won a majority of seats overall, the PPP won a majority of seats in West Pakistan; the two parties were unable to agree on a new constitution in particular on the issue of Six Point Movement which many in West Pakistan saw as a way to break up the country. Subsequent uprisings led to the secession of Bangladesh, and Pakistan losing the war against Bangladesh-allied India in 1971. Bhutto was handed over the presidency in December 1971 and emergency rule was imposed. When Bhutto set about rebuilding Pakistan, he stated his intention was to “rebuild confidence and rebuild hope for the future”.

By July 1972, Bhutto recovered 43,600 prisoners of war and 5,000 sq mi of Indian-held territory after signing the Simla Agreement. He strengthened ties with China and Saudi Arabia, recognised Bangladesh, and hosted the second Organisation of the Islamic Conference in Lahore in 1974. Domestically, Bhutto’s reign saw parliament unanimously approve a new constitution in 1973, upon which he appointed Fazal Ilahi Chaudhry President and switched to the newly empowered office of Prime Minister. He also played an integral role in initiating the country’s nuclear programme. However, Bhutto’s nationalisation of much of Pakistan’s fledgling industries, healthcare, and educational institutions led to economic stagnation. After dissolving provincial feudal governments in Balochistan was met with unrest, Bhutto also ordered an army operation in the province in 1973, causing thousands of civilian casualties.

Despite civil disorder, the PPP won parliamentary elections in 1977 by a wide margin. However, the opposition alleged widespread vote rigging, and violence escalated across the country. On 5 July that same year, Bhutto was deposed in a military coup by his appointed army chief Zia-ul-Haq, before being controversially tried and executed by the Supreme Court of Pakistan in 1979 for authorising the murder of a political opponent.

Bhutto remains a contentious figure, being hailed for his nationalism and secular internationalist agenda, yet, is criticized for intimidating his political opponents and for human rights violations. He is often considered one of Pakistan’s greatest leaders,[13] and his party, the PPP, remains among Pakistan’s largest, with his daughter Benazir Bhutto being twice elected Prime Minister, while his son-in-law and Benazir’s husband, Asif Ali Zardari, served as president.

Zulfikar Ali Bhutto belonged to a Sindhi Bhutto Muslim Arain family, he was born to Sir Shah Nawaz Bhutto Arain and Khursheed Begum near Larkana. Zulfikar was their third child—their first one, Sikandar Ali, had died from pneumonia at age seven in 1914, and the second, Imdad Ali, died of cirrhosis at age 39 in 1953. His father was the dewan of the princely state of Junagadh, and enjoyed an influential relationship with the officials of the British Raj. As a young boy, Bhutto moved to Worli Seaface in Bombay to study at the Cathedral and John Connon School. He then also became an activist in the Pakistan Movement. In 1943, his marriage was arranged with Shireen Amir Begum. In 1947, Bhutto was admitted to the University of Southern California to study political science.

In 1949, as a sophomore, Bhutto transferred to the University of California, Berkeley, where he earned a B.A. (honours) degree in political science in 1950. There, Bhutto became interested in the theories of socialism, delivering a series of lectures on their feasibility in Islamic countries. During this time, Bhutto’s father played a controversial role in the affairs of Junagadh. Coming to power in a palace coup, he secured the accession of his state to Pakistan, which was ultimately negated by Indian intervention in December 1947. In June 1950, Bhutto travelled to the United Kingdom to study law at Christ Church, Oxford and received an LLB, followed by an LLM degree in law and an M.Sc. (honours) degree in political science. Upon finishing his studies, he was called to the bar at Lincoln’s Inn in 1953. He was fellow of Barrister Ijaz Hussain Batalvi who later appeared in his case as prosecutor.

A Pakistan International Airlines flight was sent to fetch Bhutto from New York, who at that time was presenting Pakistan’s case before the United Nations Security Council on the East Pakistan Crises. Bhutto returned home on 18 December 1971. On 20 December, he was taken to the President House in Rawalpindi, where he took over two positions from Yahya Khan, one as president and the other as first civilian Chief Martial Law Administrator. Thus, he was the first civilian Chief Martial Law Administrator of the dismembered Pakistan. By the time Bhutto had assumed control of what remained of Pakistan, the nation was completely isolated, angered, and demoralized.

President Bhutto addressing the nation via radio and television saying ‘My dear countrymen, my dear friends, my dear students, labourers, peasants… those who fought for Pakistan… We are facing the worst crisis in our country’s life, a deadly crisis. We have to pick up the pieces, very small pieces, but we will make a new Pakistan, a prosperous and progressive Pakistan, a Pakistan free of exploitation, a Pakistan envisaged by the Quaid-e-Azam’.

As president, Bhutto faced mounting challenges on both internal and foreign fronts. The trauma was severe in Pakistan, a psychological setback and emotional breakdown for Pakistan. The two-nation theory—the theoretical basis for the creation of Pakistan—lay discredited, and Pakistan’s foreign policy collapsed when no moral support was found anywhere, including long-standing allies such as the U.S. and China. However this is disputed even by Bangladeshi academics who insist that the two-nation theory was not discredited  Since her creation, the physical and moral existence of Pakistan was in great danger. On the internal front, Baloch, Sindhi, Punjabi, and Pashtun nationalisms were at their peak, calling for their independence from Pakistan. Finding it difficult to keep Pakistan united, Bhutto launched full-fledged intelligence and military operations to stamp out any separatist movements. By the end of 1978, these nationalist organizations were brutally quelled by Pakistan Armed Forces.

Bhutto was sworn in as the prime minister of the country on 14 August 1973, after he had secured 108 votes in a house of 146 members. Fazal Ilahi Chaudhry was elected as the president under the new constitution. During his five years of government, the Bhutto government made extensive reforms at every level of government. Pakistan’s capital and Western reforms that were begun and built in 1947 throughout the 1970s, were transformed and replaced with Socialist system. His policies were seen people friendly, but it did not produce long-lasting effects as the civil disorder against Bhutto began to take place in 1977.

Bhutto was a Shia Muslim who married three times. His first marriage took place in 1943, when he married his cousin and first wife Shireen Amir Begum. In 1951, he married Begum Nusrat Ispahani on 8 September 1951. The couple had four children: Benazir, Murtaza, Sanam, and Shahnawaz.

His third marriage was to Bengali lady, Husna Sheikh, whose divorce from her husband was forced by Bhutto. Husna has one son, Zulfikar Ali Bhutto Jr. They both live in Dubai.

Bhutto remains a controversial and largely discussed figure in Pakistan. While he was hailed for his nationalism, Bhutto was roundly criticized for intimidating his political opponents. By the time Bhutto was given the control of his country in 1971, Pakistan was torn apart, isolated, demoralized, and emotionally shattered after a psychological and bitter defeat at the hands of its bitter rival India. His political rivals had blamed his socialist policies for slowing down Pakistan’s economic progress, as they caused poor productivity and high costs. However Bhutto and co[who?] countered that they were merely addressing the massive inequality built up over the Ayub Khan years.

Bhutto is blamed by some quarters for causing the Bangladesh Liberation War. In 1977, General Zia-ul-Haq released former general Yahya Khan from prison and his Lieutenant-General Fazle Haq gave him the honorary guard of honor when the former general died in 1980. After being released from house arrest after the 1977 coup Yahya said, “It was Bhutto, not Mujib, who broke Pakistan. Bhutto’s stance in 1971 and his stubbornness harmed Pakistan’s solidarity much more than Sheikh Mujib’s six-point demand. It was his high ambitions and rigid stance that led to rebellion in East Pakistan. He riled up the Bengalis and brought an end to Pakistan’s solidarity. East Pakistan broke away.” Other army men who lay blame for 1971 on Bhutto include future President Pervez Musharraf and East Pakistan’s former Martial Law Administrator Syed Mohammad Ahsan. Bhutto is also often criticised for human-rights abuses in Baluchistan by hardline Islamists as well as conservatives. Bhutto’s actions during the 1970s operation in Balochistan are also criticised for failing to bring about a lasting peace in the region.

Bhutto’s international image is more positive, casting him as a secular internationalist. Domestically, despite the criticism, Bhutto still remains Pakistan’s most popular leader. During his premiership, Bhutto succeeded in uniting all the parties in getting the 1973 constitution enacted. His determined and aggressive embrace of nuclear weapons for Pakistan has made him regarded as the father of Pakistan’s nuclear-deterrence programme, which he pursued in spite of Pakistan’s limited financial resources and strong opposition from the United States. In 2006, The Atlantic described Bhutto as demagogic and extremely populist, but still Pakistan’s greatest civilian leader. Even though Henry Kissinger developed differences with Bhutto, in his 1979 memoir White House Years he conceded that Bhutto was “brilliant, charming, of global stature in his perception, a man of extraordinary abilities, capable of drawing close to any country that served Pakistan`s national interests”.

While, Bhutto’s former Law Minister Mairaj Muhammad Khan described Bhutto as “a great man but cruel”. His family remained active and influential in politics, with first his wife and then his daughter becoming leader of the PPP political party. His eldest daughter, Benazir Bhutto, was twice Prime Minister of Pakistan, and was assassinated on 27 December 2007, while campaigning for 2008 elections. While his son, Murtaza Bhutto, served as the Member Parliament of Pakistan, and was also assassinated in a controversial police encounter.

Roedad Khan, former statesman who served under Bhutto, further wrote in his book, Pakistan—A dream gone sour, that after 1971, Bhutto started extremely well, bringing the isolated, angered, apprehended, and dismembered nation back into her feet and gave the respectable place in the world, in a shortest period… With a gift of giving the nation a parliamentary system and furthermore the ambitious successful development of atomic bomb programme in a record time, are his greatest achievements in his life, for Pakistan and her people, but sadly deteriorated at the end”. Bhutto remains highly influential in country’s public, scientific, and political circles; his name yet continues to resonate in Pakistan’s collective memory.

With all the criticism and opposition, Bhutto remained highly influential and respected figure even after his death. Bhutto is widely regarded as being among the most influential men in the history of Pakistan. His supporters gave him the title Quaid-e-Awam (Leader of the people).